It’s been a decade since the global financial crisis rocked the world. In the years since 2008, the U.S. and other countries put together the pieces of their broken economies, assessing what went wrong and trying to curb the abuses that could lead to another crisis. But today many factors that contributed to the implosion still pose a threat.

Although Wall Street may not go gaga over home loans as it did leading up to the last panic, it’s only a question of time before the next speculative frenzy hits. Even with regulations in place, competition and greed push Wall Street to find a new way to get rich quick. And when it does, these four factors will make the ensuing financial crisis all the worse.

» Learn how to grow your savings in good times and bad

1. Big banks hold even more assets than before the crisis

One of the contributing factors to the 2008 global financial crisis was that so few banks owned so many assets. The top five banks owned nearly 45% of financial assets leading up to the crisis, and they own slightly more today (more than 46%). The top 10 banks control more than 55% of total assets. America’s approximately 5,700 other banks control the remaining 45%. 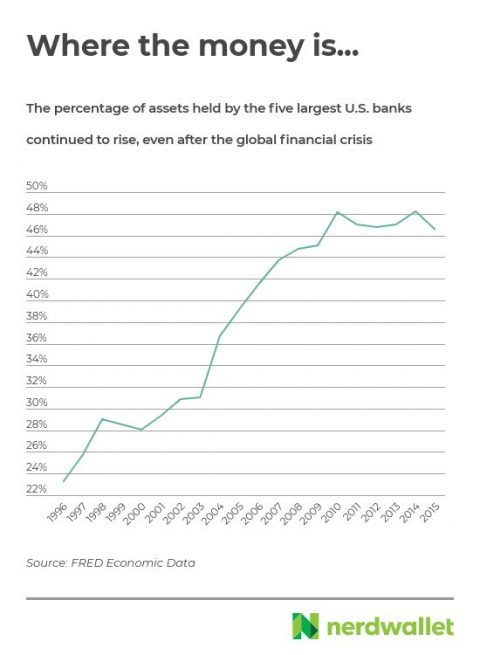 Concentration in itself is not worrisome. There’s no reason big banks can’t keep making smart decisions. But concentration of assets becomes catastrophic when those banks are all doing the same (dumb) thing, such as writing poor loans or gambling against the value of homes via sophisticated insurance contracts (credit default swaps). Then other smart financial institutions are not large enough to step in and bail out the failing ones. So the government has to intervene.

And whereas the banks may steer clear of speculative excess today, competition virtually ensures that, eventually, Wall Street will do dumb things again.

The banking sector is particularly prone to blowups because it uses a lot of debt (i.e., leverage), writing large loans against a small down payment. This is normal for the industry and is not especially worrisome, if banks are operated prudently. Here’s how the situation stacks up now versus 2008. Banks are using just a bit less leverage than previously (a higher percentage means less leverage). 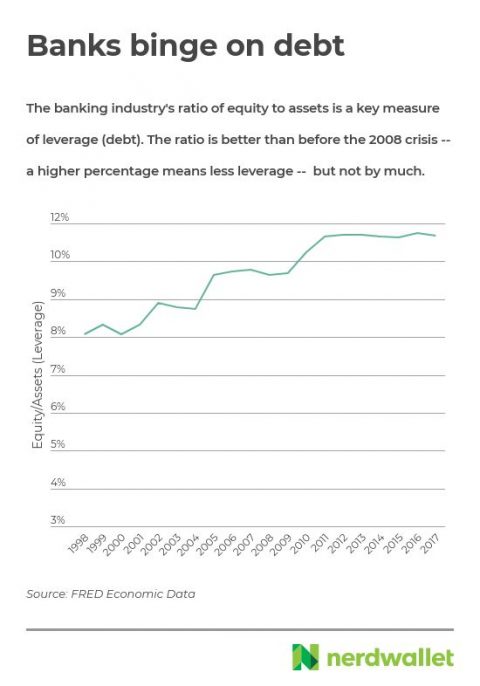 During good times leverage works wonders, because it rapidly increases the bank’s profitability. That’s why banks would like to use more leverage. But leverage does the opposite in bad times. When the value of houses plummets, banks are required to write off that value on their books, making the bank even more leveraged. If leverage keeps rising, the bank effectively becomes bankrupt. That’s why there is stringent regulation surrounding how much leverage a bank can take on, and why further regulations were developed in the aftermath of the crisis.

In an industry with high leverage, the proverbial run on the bank can happen a lot faster than in other industries without leverage.

No executives from “too big to fail” banks were prosecuted for issues related to the financial crisis. For that crisis, which many argue was due to banks’ criminal activities, the lack of widespread punishment creates “moral hazard.” In other words, if executives feel they are personally exempt from repercussions, they’re more likely to engage in bad behavior, especially if it benefits them financially.

Rather than pursue executives individually, prosecutors have tended to go after the companies. They’ll fine the bank, and no one gets jail time. According to The Wall Street Journal, the six largest banks paid $110 billion in penalties for issues related to the crisis. So it’s the shareholders who suffer, since their investment is being punished, rather than an executive.

In the wake of the financial crisis, Congress passed the Dodd-Frank Act, which regulated banks. The law created the Volcker Rule preventing government-insured banks from engaging in certain kinds of speculative, typically highly leveraged activity. The law also created the Consumer Financial Protection Bureau, which regulates the banking industry.

Following a few years of relative economic normalcy, the financial lobby and many politicians are pushing back against the legislation, saying that regulation harms the industry. And there’s at least some truth to that, because the legislation is more costly for the medium and small community banks. But larger banks are also pushing this line because they want to take more risks; for example, in speculative trading that is currently prohibited by the Volcker Rule. Those riskier activities could blow up a bank.

So a repeal of those regulations, or even just parts of them, could pose more danger to the economic system, setting the stage for more “casino capitalism” and another bank crisis.

» Read about how Dodd-Frank rollbacks could affect your bank account

What can you do now?

It’s not surprising that the global financial crisis happened within a decade of the 1999 repeal of the 1933 Glass-Steagall Act limiting banks’ risk-taking. Regulation effectively prevented full-on bank crises since the Great Depression, and it’s a step that could work today.

Consumers can contact their representatives in government to voice their concerns, or support candidates who favor stronger financial regulation. As things stand now, though, it will be only a matter of time until we’re asking these questions again.

James F. Royal, Ph.D., is a former NerdWallet writer. His work has also been featured in the Washington Post, New York Times and the Associated Press. Read more