The recipe for the perfect foodie vacation is simple: Combine equal parts adventure, conversation and well-loved regional specialty dishes — and a dash of surprise and delight.

If you love to eat and travel, it’s an irresistible combination. That’s why making it a priority to discover tasty treats on your next getaway might be the best travel decision you ever make. Here’s how you can spice up the itinerary on your next trip, according to four food and travel bloggers. 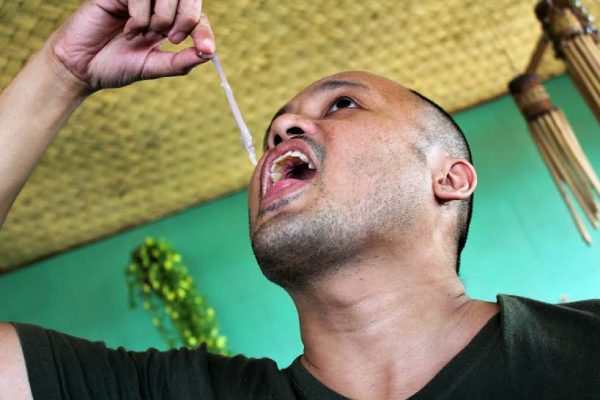 When planning a trip, food and travel blogger JB Macatulad always starts by asking, “’What are the national dishes? … If we go to certain cities, like Yogyakarta or Bandung [in Indonesia], are there regional specialties that we can only find there that we should try?’” After compiling a list, he starts looking for well-reviewed restaurants in the area that serve these specialties.

Macatulad and his wife, Renee, who live in Quezon City, Philippines, also maintain an epic list of must-try dishes from every country in the world on the travel and food blog they co-founded, Will Fly for Food. On their tasty to-do list: pastizzi in Malta, dumplings in China and bratwurst in Germany.

It was the best thing we ate in our whole two weeks, and it wasn’t even expected.

JB Macatulad, co-founder of the food and travel blog Will Fly for Food

Often, the best food recommendations come from locals. While traveling in Vietnam, Macatulad and his wife struck up a conversation with their tour guide, who lived in the area.

“He got so excited by the fact that we were so excited about Vietnamese food that after the tour, he took us to his favorite Vietnamese restaurant and showed us a dish we didn’t even know about,” says Macatulad, who previously lived in San Francisco. It was a delicious noodle dish called banh canh. “It was the best thing we ate in our whole two weeks, and it wasn’t even expected.”

When you’re unfamiliar with a country’s local fare, it’s tempting to stick with what you know. Don’t.

“Be open to local food,” Macatulad says. “I’ve been on tours where a lot of people were kind of afraid of the foreign food, which is kind of a shame, because [they’re] really missing out on a lot.”

Go on a food tour 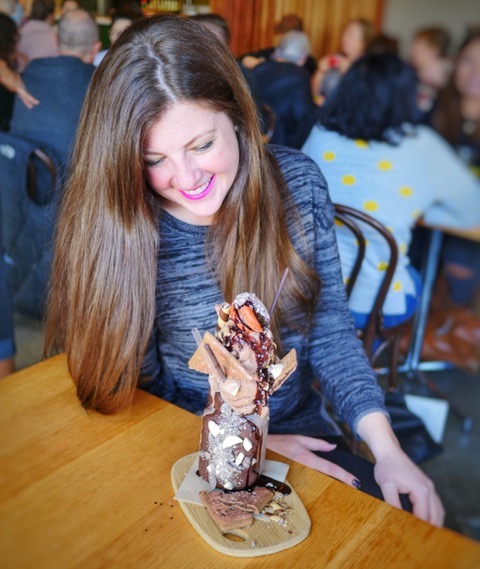 To get a feel for a local food scene, it helps to go on a food tour on the first day of your trip, says Brittany Kulick, founder of the travel and food blog The Sweet Wanderlust. Typically, food tours take you to at least five restaurants and bars where you can sample new foods and drinks, says Kulick, a full-time traveler based in Melbourne, Australia.

While nibbling on those samples, you might get to learn more about the history of the local cuisine. On one food tour in Rome, for example, Kulick remembers dining in a 2,000-year-old wine cellar.

“We ate pork shoulder prepared with apples and honey, made using the recipe of Julius Caesar’s chef, Gaius Matius,” she says. “What in the world? That’s probably still my top foodie experience. We’re in Rome, eating something Julius Caesar would have eaten thousands of years ago.”

“Melbourne is where I fell in love with freakshakes,” says Kulick, who previously lived in Dallas. Freakshakes, which are milkshakes overflowing with elaborate toppings, were invented in Canberra, Australia. But Melbourne later took the trend and ran with it, Kulick notes.

“They put doughnuts and fairy floss and waffles and lollipops and all kinds of ridiculous stuff on milkshakes. And they’re just so beautiful and bright,” she says.

If your destination has a similar specialty, make sure to try it at least once. 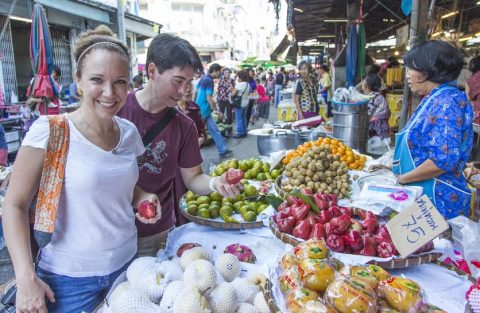 “When I travel to places that are really known for food … I try to take a cooking class when I go and learn a dish when I’m there,” says Rachelle Lucas, founder of the travel and food blog The Travel Bite. She notes that cooking classes can range in price from about $30 to $100.

In one cooking class in Barcelona, “We learned how to make paella. We made little appetizers. It was probably half a day,” says Lucas, who lives in Orlando, Florida. “We just walked from where the cooking class was to the local market and picked out stuff we’d actually be cooking.” The best part: At the end of a cooking class, you get to eat what you make.

Farmers markets are typically open-air venues where you can purchase fresh food from local farmers, bakers and chefs. When you visit them while traveling, “There are always surprises, depending on the fruits and vegetables that are grown locally,” Lucas says.

You might discover a type of berry you’ve never tasted before, or a leafy green that you wouldn’t have been able to find at your hometown grocery store. Just be sure to bring along some cash, because you might not be able to use plastic. 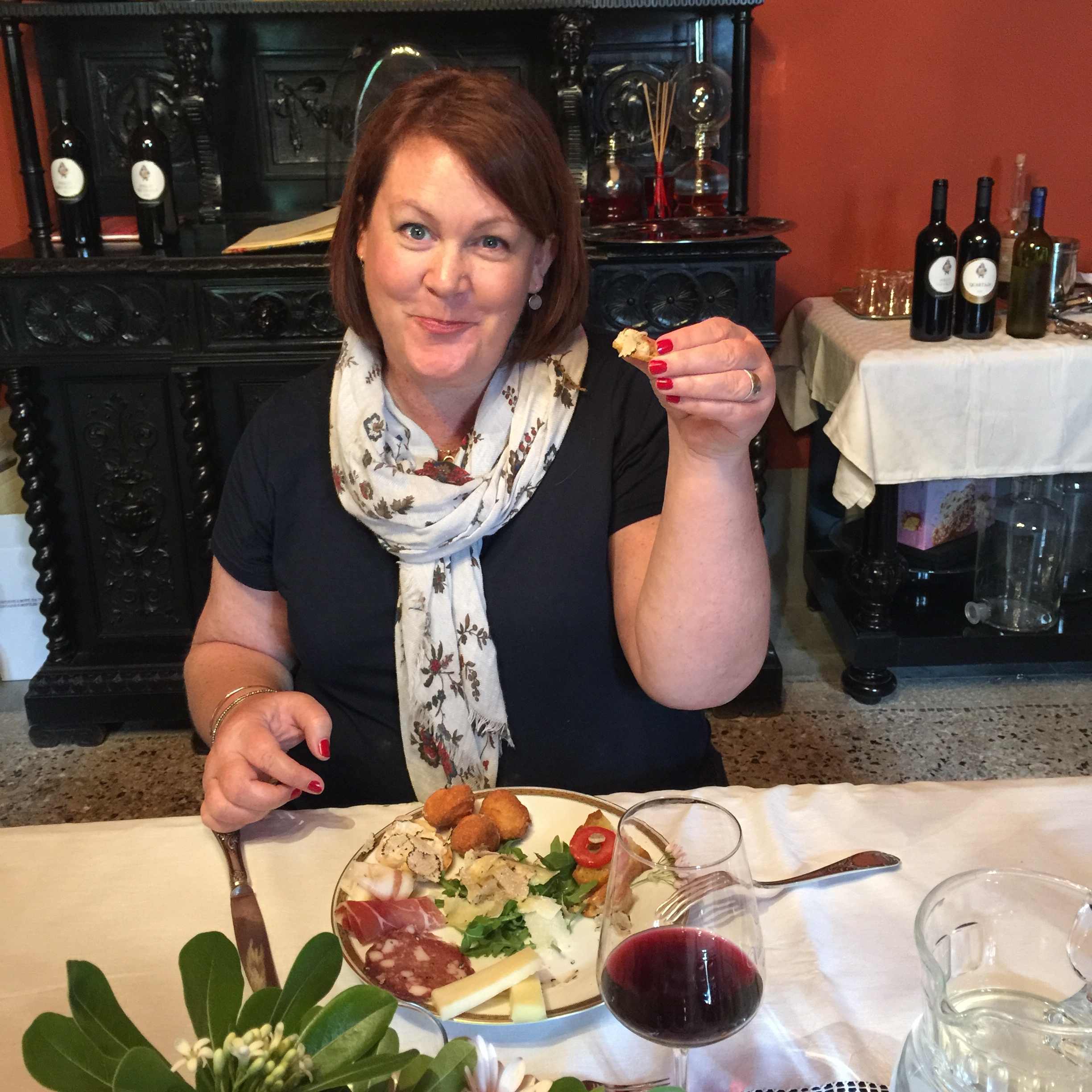 When food and travel blogger Heather Carlson travels with her family, they have a tradition of trying the same dish at multiple restaurants. It all started after they once ordered roasted potatoes, a common Italian side dish, in a restaurant in Orvieto, a small town in Umbria, Italy. The spuds — which the family later dubbed “magical potatoes” — were unforgettable.

“They were really tender inside, but they had this sort of crisp — almost like they had been battered, but they weren’t at all battered,” says Carlson, of Boise, Idaho, founder of the Italian food and travel blog A Merry Feast. Previously, she and her family lived in Milan, Italy, as expats. “They must have been rolled in something. They had this crunchy, kind of salty exterior.”

Afterward, the family started ordering a side of roasted potatoes at each Italian restaurant they visited, comparing them with that delicious recipe. They laugh about it now, she says, noting that they’re from Idaho, a state famous for potatoes. So far, those magical potatoes they tried in Orvieto are still No. 1, she says.

Go to a food festival

Food festivals, or outdoor events where you can sample foods from several vendors, can be a great way to taste local produce that’s in season. In Italy, for example, you can find truffle festivals or onion festivals during certain times of year, Carlson says.

Food festivals typically happen at the same time each year, she notes, so they’re easy to plan around. Aside from writing about food and travel, Carlson also leads food tours in Italy each fall, where she takes travelers to an olive harvest festival in Umbria.

Some of my favorite souvenirs to bring home are cookbooks or ingredients from places I visit.

Heather Carlson, founder of the food and travel blog A Merry Feast

Instead of picking up random tchotchkes in souvenir shops, go for foodie items.

“Some of my favorite souvenirs to bring home are cookbooks or ingredients from places I visit,” Carlson says. “A lot of times you can find a dual-language cookbook from the region that you go to, so you can try some of these things when you come home.” You could treat your friends and family to a dinner party, she says, and make recipes based on the food you tried while traveling.

If you’re shopping abroad with a credit card, just be sure to use one that doesn’t charge foreign transaction fees, so you don’t wind up paying an extra 3%. And when you return to the U.S., remember to declare food items in customs to avoid costly penalties.

A previous version of this story gave an incorrect prior city of residence for Brittany Kulick. This article has been corrected.