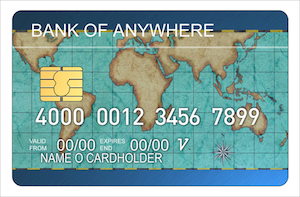 In the United States credit cards are accepted nearly everywhere, so it’s hard to imagine doing our daily shopping without plastic. But in many parts of the world credit card payment terminals are scarce, which means that customers are forced to rely on cash.

However, all that is changing with the introduction of mobile technology. This is because cell phones and tablets make it possible for merchants to use mobile point-of-sale (MPOS) systems to accept credit and debit cards. One such system is Ezetap, and it’s poised to take the world by storm.

Not familiar with Ezetap? Take a look at the details below — it could be coming to retailer near you!

Signed off on transaction with your finger recently? If so, you probably made your purchase using Square, a popular MPOS system that allows merchants to turn their mobile devices into credit card readers. Square has made accepting credit card payments easy and affordable for small business owners all over the United States

If you’re familiar with Square, you already have a good frame of reference for how Ezetap works: The merchant downloads the Ezetap application and purchases the Ezetap dongle to plug into a phone or tablet. The dongle functions as a credit card reader, so when it’s time to pay, your card is swiped through the device. Then the app takes over and processes the plastic payments. The system is easy to use for both retailers and customers, which is part of its appeal.

Ezetap also has other similarities to Square, including:

However, Ezetap has one key edge over Square that has made investors take notice: It’s able to accept both magnetic strip and chip-and-pin plastic (except Discover), whereas Square only works with magnetic-strip cards.

This is significant for several reasons, not the least of which is that Ezetap is able to be used in countries where chip cards predominate. Plus, it’s likely that magnetic-strip cards will soon be phased out in the United States due to security concerns. This means that Ezetap is positioned to be a powerful player in the MPOS market and will likely compete more closely with European counterparts like iZettle.

MPOS systems are so important because they allow merchants in developing nations to bypass significant obstacles to accepting credit card transactions. For example, in parts of Asia, Africa, and the Middle East, purchasing the equipment necessary to process plastic payments in the traditional manner is too expensive for many retailers. This means that credit card point-of-sale systems are hard to come by, and customers are forced to use cash.

The Economic Times estimates that over 300 million people in India own credit or debit cards, but there are only 800,000 credit card terminals to handle these transactions. This obviously makes it impossible for customers to use their plastic as frequently as people in the developed world.

But Ezetap only requires a mobile device, an Internet connection and the inexpensive card reader to process credit and debit payments. As Ezetap spreads throughout the developing world, payment with plastic is likely to increase.

What’s next for Ezetap?

Bangalore-based Ezetap was founded in 2011 and has been expanding ever since. Early partners included MasterCard and Equity Bank, and in March 2014 American Express announced that it would be investing an undisclosed amount of capital in the company, too.

Ezetap plans to use the funds provided by recent investments to drive deeper into the Southeast Asian and African markets. The Economic Times reports that there are 12,000 Ezetap readers in these regions, and the company hopes to boost that number to 100,000 by 2015.

All this means that Ezetap is on the rise and will likely continue to grow — before long, we might be seeing it at food trucks and festival vendors in our own neighborhoods!

The takeaway: Ezetap is a MPOS system that is growing rapidly. It’s similar to Square, but allows customers to use either magnetic-strip or chip cards. Ezetap is expected to expand credit and debit card use in the developing world, and might even make its way to the United States as chip cards become the norm. Whatever direction Ezetap takes, the Nerds will be here to keep you informed!

Bank of anywhere image via Shutterstock