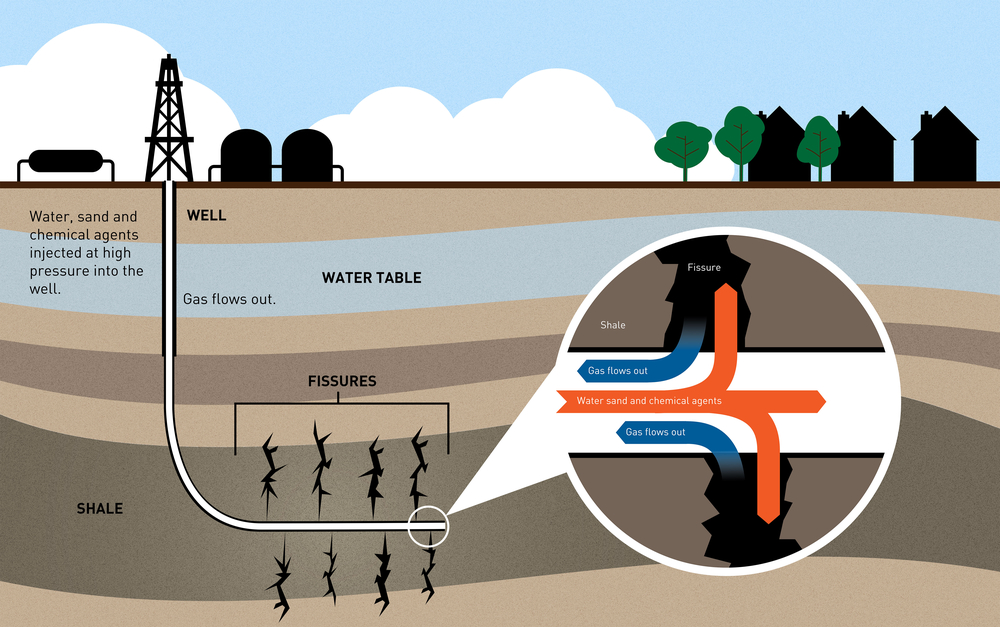 The method of natural gas drilling known as hydraulic fracturing, or “fracking,” has caused controversy across the U.S. Advocates argue that it promises increased energy independence. For others, it means environmental catastrophe.

In the ongoing debate, two things are for sure. The practice is responsible for much of the recent spike in natural gas production in the United States, and homeowners are often caught in the middle.

Those who lease their land for drilling can see huge profits, but some reports suggest that these profits come with risk for both lessors and their neighbors – and who pays for these risks can be a complicated question.

“Fracking involves drilling down several thousand feet into a rock formation that holds natural gas,” said Bruce Everett, associate professor of international business at Tufts University’s Fletcher School of Law and Diplomacy. Drillers then pump a mixture of high-pressure water and chemicals into the hole. “That cracks the rock and creates pathways for gas to flow out of the well.”

Drilling operations are left with two products: natural gas and wastewater. There are a few wastewater disposal methods. “You can put the water in a lined pond and let it evaporate, treat it or inject it underground,” said Everett. Injection is the most debated method.

Even the term “fracking” is controversial. According to Claire Sandberg of the Rainforest Action Network, some use “fracking” to describe “the entire life cycle of natural gas wells.” Within the industry, she added, “fracking” may refer to the injection portion of the drilling process.

Does fracking pose risks to homeowners?

Some suggest that fracking risks are often overstated. “There are some disruptive impacts of this technology, which are relatively small compared to its benefits,” Everett said. For example, “fracking is normally not a threat to drinking water in any meaningful way. If it is, it’s because someone screwed up big time.”

Scientists are still investigating the extent and likelihood of the risks fracking entails. Still, many believe a recent uptick in earthquake activity is related to fracking.

“The United States Geological Survey has linked fracking waste water injection to a 5.6 magnitude earthquake in Oklahoma, and there have been other scientific studies linking injection to earthquakes elsewhere,” said Patrick Sullivan of the Center for Biological Diversity.

Earthquake trends are easier to identify in states like Oklahoma, which have long been seismically stable. Links are harder to prove in states like California – but the stakes are higher. “Fifty-four percent of California’s active waste water wells are within 10 miles of an active fault,” and many are near residential areas, Sullivan said.

Earthquakes aren’t the only possible consequence of fracking. Linda Capato of 350.org, an environmental advocacy group, said: “We’ve seen people who’ve had a hard time staying in their homes because of methane buildup related to fracking. There’s a chance that if someone lights a candle in the house, the house may explode.”

Environmental risks often apply equally to those who’ve leased their property for drilling and those who simply live near drilling sites and so may the economic impacts.

Economist Janette Barth notes that fracking is often associated with diminished property values – which, she argues, thwarts economic progress in the areas fracking is meant to help.

Nationwide Insurance made headlines in 2012 when an internal memo stating that its policies did not cover homeowners for fracking damage was leaked. In response to the fallout, Nationwide said that this was business as usual.

Bob Hartwig of the Insurance Information Institute agrees: “All homeowners insurance policies exclude damage from such things as environmental contamination. This is nothing new.”

Of course, pollution isn’t the only risk from fracking that activists have cited – and some of these risks may be covered. Homeowners with an earthquake endorsement can get coverage for earthquake damage, even if the quake is linked to fracking. “If there’s a fire or explosion, as a general rule, that would be covered,” Hartwig adds.

This only applies to homeowners who live near fracking sites. For those who’ve leased their land – in effect, making it a business – insurance is more complicated.

“The liabilities arising from a business are not covered by a homeowners policy,” Hartwig said. “Any agreements should be reviewed by an attorney to determine that the liability will be assumed by the company engaging in the activity.”

What should homeowners with fracking damage do?

If you live near a fracking site, you may need to buy additional home insurance endorsements to cover your risk.

“Many of these earthquakes are happening in places where people don’t buy policies,” Capato points out.

Homeowners who lease their land or experience pollution and other uncovered damages should consider fracking a legal issue.

“If you lease your mineral rights to a company, the contract will say the company has to do A, B, C and D, and if there’s a problem, here’s what’s going to happen. It’s also potentially covered by state regulations,” Everett said. “The requirement for homeowners insurance is a relatively small one.”

He adds, “The shale gas business started mainly in Texas. People there have worked out, over the last 150 years or so, how to deal with drilling. A big body of law has developed.”

Other parts of the country have a long way to go in regulating fracking.

“There is a lot of variation in the law from state to state, in terms of how vigorously regulators seek to prevent damage in the first place, whether homeowners have administrative remedies and what burden of proof a homeowner must carry in court if initiating a damages action,” said Lloyd Burton, a professor at the University of Colorado Denver School of Public Affairs.

State and local governments will continue to address fracking as it develops. In the meantime, homeowners in some states face changing landscapes – and changing risks.