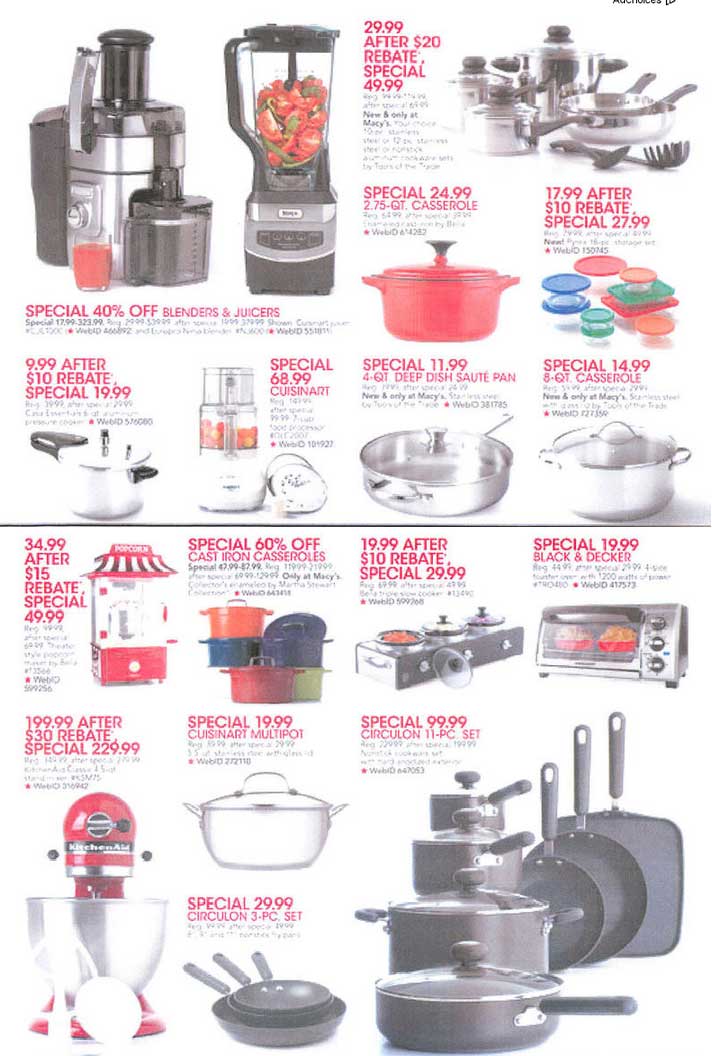 NerdWallet’s ad leak series continues with a look at the highs and lows of 2013’s Black Friday Sales. Check back soon for more ad scans from the most popular retailers.

Shoppers have been anxiously awaiting the Macy’s Black Friday 2013 ad and the scan is finally here! Macy’s colossal 49-page ad is one of the biggest we’ve ever seen, with wide selections of cookware, home goods, furniture, jewelry, luggage, and apparel and accessories for men and women. Macy’s will begin offering its doorbusters at 8pm on Thanksgiving Day through 1pm on Friday, and again from 7am through 1pm Saturday. After 1pm each day prices on most items increase, but are still majorly reduced. There are tons of savings of more than 50% in every department, making Macy’s one of the year’s strongest Black Friday contenders so far. Check out just a few of the scan’s many highlights:

This year Macy’s is breaking an astounding 155-year Black Friday tradition, and is joining several retailers on the trending Thanksgiving Day sale bandwagon! They’ll be opening their doors at 8 p.m. on Thursday, Nov. 28th, and shoppers will have access to Macy’s best Black Friday deals 2013 from then until 1 p.m. on Friday. On Saturday, customers can look forward to another round of early bird doorbusters from 7 a.m. until 1 p.m.

If last year’s massive ad scan gives any indication of what is to come this year, then shoppers are surely in for a treat. Shoppers got a sweet little sneak peek at Macy’s best Black Friday deals 2013, and the list already includes:

This sizeable list offers a hearty selection of clothing, jewelry, kitchenware, fragrances, and luggage. Unfortunately, they’ve also already presented us with inconvenient rebates. Nonetheless, the savings have already got us pumped about thrifty holiday shopping, and this is definitely just the tip of the iceberg, folks!

This year, Macy’s has implemented a new, creative way to update its social media savvy customers. For up-to-the-minute sneak peeks at sale items, you can check out Macy’s ever-expanding Pinterest page.

Macy’s is seriously bringing their A-game this holiday season by offering not only the epic Black Friday deals above, but a separate (apparently overlapping) Thanksgiving sale. The newly-released 44-page ad features more deals in just about every department – apparel, jewelry, home goods and more – along with special coupons, like an extra 15% off select apparel sale items. With so many discounts spread out over several days it would seem that customers could shop at their leisure instead of waiting in hectic lines Friday morning, but with so many outstanding deals available it may still be worthwhile to head to Macy’s ASAP before the best items disappear!

As if 49 pages weren’t enough, Macy’s has given its customers an additional 8 pages to supplement their ad scan. The first two pages tantalize shoppers with the promise of 20% off of apparel for the whole family, jewelry, handbags and more! Some highlights from the add include:

Last year’s 35-page behemoth of an ad featured a total of 867 discounted items – a lot to sift through but not without plenty of highlights. The department store cultivated anticipation for the best Macy’s Black Friday deals from 2012 with special early-bird prices available from midnight to 1 pm on Friday and 7 am to 1 pm on Saturday.

With price cuts in a wide variety of departments this ad may very well have made Macy’s a top destination for one-stop holiday shopping – especially for shoppers looking for jewelry, apparel and kitchenware. Here are some of the ad’s most expansive categories and biggest discounts

The ad’s only major drawback? Exclusions. Macy’s otherwise outstanding deals didn’t apply to items in a number of categories, including Superbuys, Everyday Value Specials, electronics, fragrances and cosmetics, furniture and special orders. But overall, Macy’s deep discounts and wide selection made it a strong contender among 2012 Black Friday destinations.

Don’t forget to check out this year’s Black Friday deals from JCPenney and Sears, as well as our recap of Macy’s 2012 Black Friday ad scans and last year’s Sneak Peek!