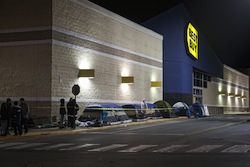 While doorbusters and other deeply discounted items steal the headlines, consumers should actually expect to pay the same or even a little more for Black Friday items this year.

In a NerdWallet analysis of 22 Black Friday ad scans, 20 listed at least one product at the same exact price in 2012 as in the retailer’s 2011 Black Friday ad. Here is the list of such items:

The median item price at Walmart, Target and Best Buy increased from 2011 to 2012.

One possible qualitative explanation for this rise in median prices is the strengthening position of retail. Merchant confidence is soaring due to the most optimistic predictions on holiday buying since the recession. This means that merchants have less incentive to drive sales at the expense of profit margins. Less desperation to get merchandise off the shelves means higher prices for consumers.

Methodology: In order to accurately compare across 2011 and 2012, we only selected ads for which the ad scans for both years were readily available. We chose to analyze medium sized ad scans (defined as ad scans between 3 and 16 pages long) to eliminate the bias inherent in small sample sizes and overly large data sets.

We also limited our conclusions to comparable pricing. For example, a Dell 20″ Flat Panel LED Backlit Monitor (IN2030M) selling for $78.99 this year is not comparable to the same monitor selling for 50% off in 2011 if the final 2011 price after the 50% off is not known.