If you’re looking for a midrange phone that isn’t too pricey, you have some options.

Among them are the BlackBerry DTEK50 and the Motorola Moto X Pure Edition. We compared the two side by side to see how the individual features and hardware stack up against each other.

The phones: Up close and personal 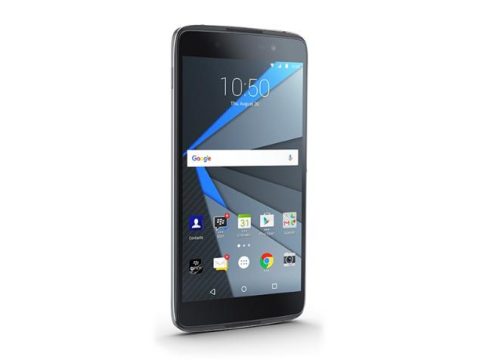 The DTEK50 is a sleek black device with a 5.2-inch touch-screen display. It has power on/off and volume buttons, in addition to a customizable “convenience key” on the right edge. Users can program this button to open any app. The phone also has two front-facing stereo speakers.

The DTEK50 might offer some peace of mind for the security-conscious. The smartphone comes unlocked, which means it isn’t tied to a specific mobile carrier or contract. However, it’s compatible only with wireless carriers that have GSM networks, such as AT&T and T-Mobile.

Some of the functional aspects could be improved: Users said the phone was slower than expected and experienced delays when loading apps or web pages. Every now and then, the phone would stutter, even when performing basic tasks.

The Motorola Moto X Pure Edition is a big phone, sporting a 5.7-inch high-resolution screen with front-facing speakers. Power and volume buttons sit along the edge of the phone.

Similar to the DTEK50, the Moto X is an unlocked device, but it’s compatible with all major wireless service providers, whether they use a GSM or CDMA network.

What makes the Moto X unique is its customizable exterior. Users can buy back plates in different colors to personalize their device.

Being able to personalize the phone with interchangeable colors and designs might draw in the average phone user, but mobile fanatics will appreciate the Pure Android feature. Couple that with speedy internal components, and you have a phone that is fast and powerful.

Some reviewers complained that the battery runs out quickly after mixed use, but the phone’s TurboPower charging feature aims to mitigate that. Also, at 5.7 inches, the Moto X might be a little too large for people with smaller hands.

Both devices have similar price points, so your choice depends on the features you want.

If you’re looking for a personal phone, the Motorola Moto X Pure Edition might be the better option. The latest Android software, TurboPower charging and customization features make the Moto X comparable with the some high-end phones on the market but with midrange pricing.

If you’re looking for a device for your business, the BlackBerry DTEK50 could be a good option. It doesn’t have too many bells and whistles, but that’s offset by its security features. You can work from your phone with the BlackBerry features and Android for Work software with the comfort that your files, data and documents are locked in and secure.

More from NerdWallet
What to Buy (and Skip) in October
The Best Birthday Discounts and Freebies
You Got a Gift Card You Don’t Want. Now What?