Sony has a rich history in audio equipment. It was the first company to introduce a personal music player — the Walkman — and the company continues to develop and produce top-quality devices, from home stereo systems to headphones and speakers.

Two of Sony’s popular wireless speakers, the Sony SRS-X3 and SRS-X5, are similar in sound quality and design. There isn’t much differentiating the two, save for size and charging ports, but the minute differences in features might sway your preference from one to the other.

We compared the X3 and X5 side by side to help you decide which of these Sony SRS-X speakers is right for you. Read through our comparison to see how the devices fared against each other.

The speakers: At a glance

What we found: Both speakers sport Bluetooth-NFC connectivity, which lets users seamlessly connect their devices by simply tapping them together. Sony managed to squeeze dual passive radiators into the compact design of both the X3 and X5. These radiators support the speaker drivers to deliver full range and an impressive bass component.

Sony doesn’t make choosing a device easy; these models have many similarities. The biggest thing that sets them apart is price: Sony prices the X3 at $129.99 (though it has since been discontinued) and the X5 at $179.99, but both can be purchased for less on Amazon.

The speakers: Up close and personal

NerdWallet takes you shopping: As the smaller of the two, the Sony SRS-X3 weighs in at 1.8 pounds and is rectangular. Sony’s minimalist design for the SRS series makes these speakers simple and sleek, though users say the X3 feels sturdy and durable. Its body is perfect for placing on a nightstand, bookshelf edge or dresser.

As far as sound goes, despite having bass radiators, the X3’s small build limits its bass capabilities. But users say it can still produce a well-balanced sound with crisp midrange and high frequencies, especially when the volume is kept at about 50% to 75% of its max.

The SRS-X3 also has three different sound modes: Virtual Surround Sound, Volume Control and ClearAudio+. Users said the settings don’t necessarily make the speaker sound better, but depending on the genre of music you listen to, these modes could improve the sound quality. 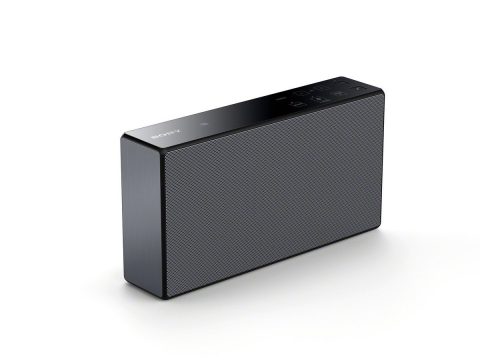 NerdWallet takes you shopping: The SRS-X5 is about double the size of the X3, and Sony used the extra room to include a subwoofer. Dual drivers work to replicate a well-balanced sound, and according to buyers, the added woofer gives the X5 a more defined bass component. Users say vocals come through crisp and clear, and midrange frequencies are present but not overbearing.

The X5 has similar sound modes to the X3, including ClearAudio+, but the X5 has a Digital Sound Enhancement Engine (DSEE) and an S-Master amplifier. Both features are dedicated to reading audio files and reformatting to improve sound quality and reduce distortion.

In terms of volume, the X5 can hit higher levels and can handle bass a little better than the X3, users say. Users also noted the X5 plays louder when plugged into a power source as opposed to when it’s running on battery power.

Most users said both speakers work best indoors and said they didn’t take the speakers anywhere past their patio. Many users thought the SRS-X3 and SRS-X5 were portable because of the wireless feature; but some felt the speaker build wasn’t durable enough to be taken on outdoor trips.

The speakers demonstrate equal sound quality, according to buyers, but it may also depend on what kind of music you prefer. If you listen to bass-heavy music, the X5 has the upper hand over the X3. The X5’s S-Master amplifier and DSEE program represent more advanced audio-enhancing technology, and the added woofer gives the sound output more body.

If you listen to lighter instrumental music, the X3 should work just fine — and at a cheaper price. The dual radiators are still capable of replicating rich frequencies in tandem with Sony’s ClearAudio+ technology to provide a well-balanced sound, even from a small speaker unit, users say.