The TDK Life on Record TREK Max A34 is a durable, portable speaker that can withstand the elements. It delivers clear, high-quality sound with body and bass, but at 3 pounds, users say the A34 is on the heavy side for a portable speaker.

If the weight doesn’t bother you, and you’re looking for something that works equally well at the beach as it does at home, the A34 might be the portable speaker for you. 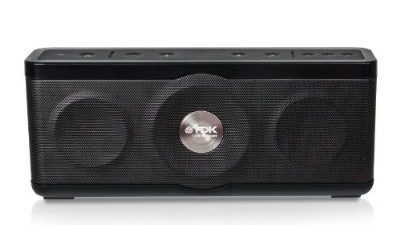 The TDK Life on Record TREK Max A34 speaker is a black box that’s less than a foot long and a little over 5 inches tall. It houses two front full-range drivers and one subwoofer to produce warm sound at high volumes with minimal distortion.

The device’s rubberized cover protects it from water and dust, and the rugged exterior is built to withstand drops. The rubber case also protects the speaker’s ports, which include an auxiliary port for non-Bluetooth devices, a USB port to charge your phone and an AC adapter for charging.

The play, skip and volume buttons are on the top of the speaker. Smartphones and tablets connect via Bluetooth or NFC; you can make and receive calls through the device’s speakerphone feature.

The TDK Life on Record TREK Max A34 speaker retails at $79 but can be found on Amazon for less.

We analyzed reviews of some of the most popular speakers on the market, including the A34. We looked at expert opinions from sites such as The Sweethome and Good Housekeeping as well as reviews from buyers to learn what they had to say about the various attributes of the speaker.

We ranked the devices from a low of 1 to a high of 10, taking into consideration both expert reviews and what users said about the speaker’s overall performance, sound quality and ease of use. We also factored in other user observations, such as durability and features.

The TDK Life on Record TREK Max A34 speaker earned a place on our best Bluetooth speaker roundup, with an overall score of 8.85, a 9.5 in sound quality and 9.1 in ease of use.

Some users said the A34 speaker boasted high volumes, deep bass and crisp midrange frequencies that reproduce clear vocals and instrumentals. They enjoyed how well the sound filled bedrooms and even larger spaces such as living rooms. The A34 also performed well outside, and some users liked the device’s durability.

Certain users especially appreciated the controls directly on the speaker box. The buttons are self-explanatory, but these reviewers liked how they could control the music from the device instead of always needing the streaming source in hand to adjust the volume and skip songs.

Although the A34 is considered a portable speaker, some users said that at 3 pounds, it’s on the heavy side.

But other users’ main complaints focus on the speaker’s battery life. They said that when they first used the device, the A34’s battery would last for a solid eight hours when played at midvolume and a few hours less when played at full volume. After a few months, though, these users started to notice a drop in playing time. Eventually, the battery would completely stop holding a charge. At that point, the speaker was either dead or had to be plugged in at all times to play music.

The TDK Life on Record TREK Max A34 is a sturdy speaker built to withstand the elements while providing the soundtrack for a day at the pool or while camping. Many users liked the overall sound quality, but especially loved how it could achieve a warm sound at high volumes with minimal distortion.

However, battery life and longevity might be an issue. Though certain users initially praised the eight-hour battery life, they saw the speaker’s life span cut short after a few months of use. Some users noted that it might be because the power button is so sensitive, so even a light touch activates it. This can cause the speaker to be left on for long periods of time, draining and overworking the battery.

If you’re concerned about the A34’s heft, you might want to check out the Bose SoundLink or Beats Pill for smaller speakers that deliver big sound.

If a long battery life is something you’re looking for, check out the JBL Xtreme. And if portability is a priority, check out our full JBL roundup to see if one fits your needs.