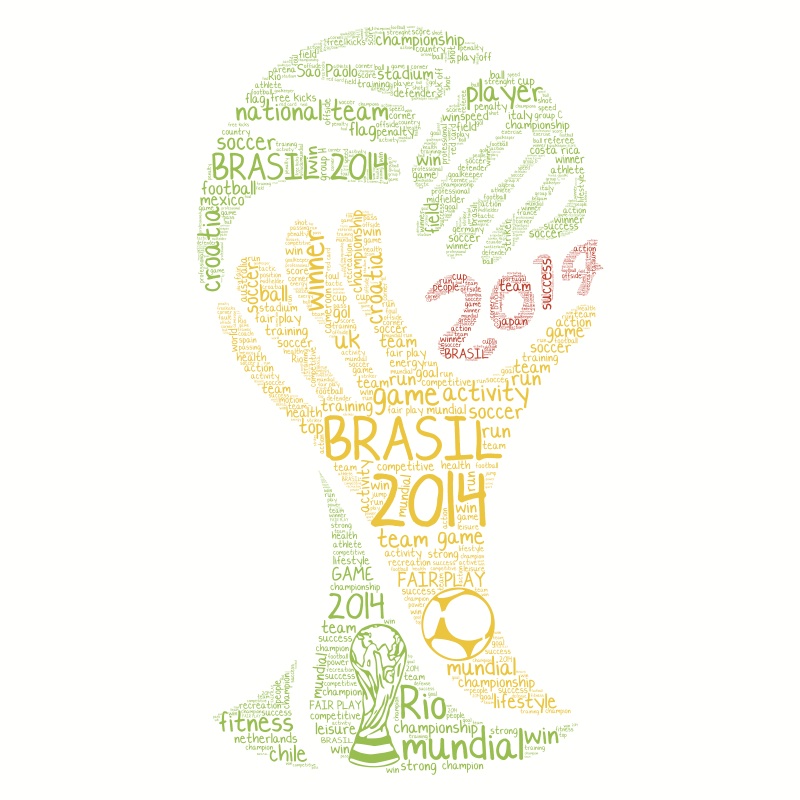 The 2014 FIFA World Cup begins on June 12th in Brazil and will take the world of sports—indeed, the world as a whole—by storm. For the next month, you’ll be apt to find friends and strangers alike debating Messi vs. Ronaldo vs. Neymar, the intricacies of the offside rule and how to pronounce words with a cedilla.

NerdWallet took a look at some interesting numbers behind the World Cup, including age and experience of each team, the theory of a “home continent advantage” and projected spending totals during the next month.

You might reasonably expect that teams with some seasoning will do better than those without. We compiled the ages of all players on a World Cup roster to compare the average ages of each country’s team. The average age of the 736 players from all 32 countries is 26.8. The oldest player in Brazil is Colombia’s reserve goalkeeper Faryd Mondragon, who will turn 43 during the group stage. The youngest player in the tournament is Cameroon forward Fabrice Olinga, who turned 18 in May.

While there isn’t too much variation in the average ages of the 32 countries in this year’s World Cup, there are significant differences in international experience. Spain is the most experienced team in this year’s tournament, with an average of nearly 60 caps per player. The Spaniards have won the last three major international tournaments, including the 2010 World Cup, so it’s not too much of a surprise to see them bring a roster filled with players who have had a hand in all that success.

Germany, another perennial contender, is among the most experienced teams this year. The 36-year-old Miroslav Klose is the country’s most-capped player, with 132, and is one goal shy of equaling the record of 15 World Cup goals held by Brazil’s Ronaldo.

The United States—even without Landon Donovan, its all-time leading scorer—is the 12th-most experienced team in the tournament, with an average of 35.5 international caps.

Host nation Brazil will field a relatively young and inexperienced group, and while they seem to be everyone’s favorite to lift the trophy in July, if there is reason to doubt them, this could be it.

The World Cup is among the biggest sporting events in the world and drives global fan interest like no other—nearly 3.2 million people attended the 64 matches of the 2010 World Cup in South Africa. Therefore, one might think that live fan support could play a role in a country’s success on the field.

Obviously, there are other factors influencing that 68% rate, such as the number of teams from the host continent—most of the countries that have participated in past World Cups have been from Europe, so it would make sense that the odds of a European country winning a World Cup being hosted in Europe are significantly higher than for other nations.

What about a “home country advantage”—are the odds further stacked to favor Brazil this year? Not so fast. A quick look at past winners reveals that the host nation has won six of the 19 World Cups, a 31.6% championship rate.

So the real advantage may be enjoyed by Argentina, Uruguay or Chile—South American sides playing relatively close to home.

Spending in Brazil: World Cup Tourists vs. Brazilians in Poverty

It has been widely reported that the 2014 World Cup is the most expensive one yet, with estimates of Brazil’s total expenditure hovering around $11 billion. The tournament’s high price tag, the burden it has placed on local taxpayers and the poverty in Brazil have fueled disputes and riots across the country.

As is the case with any major sporting event, the various committees and economists disagree on the long-term economic benefits of hosting the World Cup. Projected gains to the Brazilian economy vary from essentially $0 to $13.6 billion.

There will certainly be a great influx of spending by tourists during the four weeks of the tournament. Brazil’s tourism ministry used surveys, calculations based on average spending of tourists at past tournaments and metrics on domestic and international tourist demand from the Economic Research Institute Foundation to project visitor spending for the 2014 World Cup.

These projections include an estimated 3.7 million domestic and international tourists spending approximately $11.1 billion in all.

Those figures are significant enough on their own, but comparing them to some statistics about Brazil’s impoverished makes them seem even more substantial. Brazil’s population of almost 200 million includes about 32 million people living in poverty. We crunched the numbers to find that over the course of the World Cup, these 32 million Brazilians living in poverty will spend less than $1.3 billion combined. In other words, a group about one-ninth the size will spend about nine times more than the other.

For a visual perspective on how the projected spending of World Cup tourists will compare to how much Brazil’s poor will spend, check out the following chart and toggle between the population and spending markers:

Age, international caps and past World Cup data is from FIFA. 2014 FIFA World Cup projected spending data is from Brazil’s Ministry of Tourism. Population statistics are from The World Bank.