Here’s what you need to know about the new Hawaiian Airlines service.

Hawaiian Airlines flies five times per week between Honolulu and Boston. The Hawaii-bound flight is over 11 hours, leaving Massachusetts in the morning and arriving in Hawaii later the same day. The flight to Boston clocks in at 10 hours, leaving Honolulu in the late afternoon and arriving in Boston the next morning. Thank jet streams for making the flight from paradise a little quicker. Passengers will get two meals on the flight.

» Learn more: 10 ways to save on a Oahu vacation

Hawaiian is flying the Airbus 330 on this route, which can hold up to 278 passengers. The first class cabin has 18 lie-flat seats. There are also 68 Extra Comfort seats in the main cabin, which give passengers a 36-inch pitch for more legroom.

The new flights make it easier for East Coast flyers to reach Hawaii, and vice versa. Until the new service launched, Boston was the largest U.S. market without nonstop service to Hawaii. The airline says some 250 people were flying between eastern New England and Hawaii each way on any given day.

Because the flights to Hawaii land in the afternoon, it’s easy for passengers to make connecting flights to other islands like Maui or the Big Island.

Members of JetBlue’s loyalty program are also in luck. They can redeem their TrueBlue points for this flight and make connections to other cities, including Washington, D.C., Pittsburgh, Philadelphia, Baltimore, Cleveland and Detroit. None of these cities have JetBlue connections to New York’s John F. Kennedy Airport, Hawaiian’s other East Coast option for nonstop flights.

Using travel rewards to get you there

Hawaiian Airlines has its own loyalty program, HawaiianMiles. According to its award chart, a flight to the East Coast will cost between 30,000 and 130,000 HawaiianMiles each way.

The partnership between JetBlue and Hawaiian Airlines is also a good way to score this flight for relatively few points. It’s 30,000 TrueBlue points each way for a ticket in the main cabin between Hawaii and the East Coast, and flying business class costs 70,000 TrueBlue points each way. The catch is that you have to call JetBlue to book these awards.

Planning a trip? Check out these articles for more inspiration and advice:
NerdWallet’s top travel credit cards
Travel loyalty program reviews
Want to know how much your points and miles from these loyalty programs are worth? 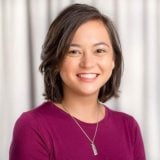 Meghan Coyle is a web producer at NerdWallet. Her work has been published in The Washington Post and heard on NPR and KCRW. Read more