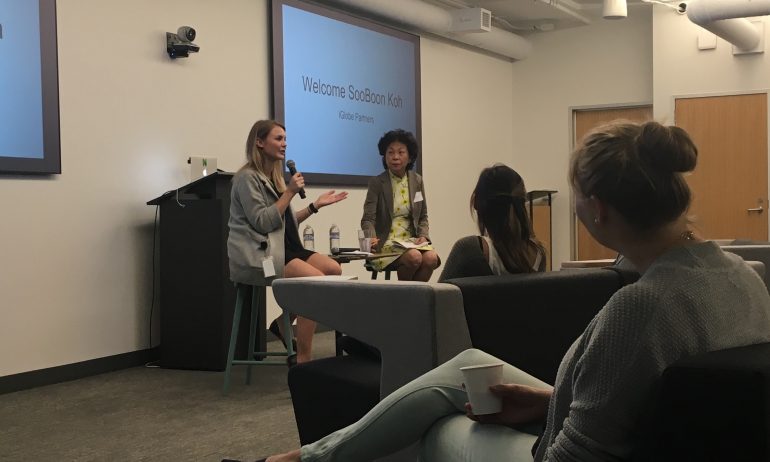 This post was written by Sara Colvin, internal communications at NerdWallet.

In July, we welcomed two of NerdWallet’s investors to the office for NerdTalks.

Jules Maltz of Institutional Venture Partners spoke to Nerds about his investment philosophy and how he views his responsibility as a board member. He also shared thoughts on how to balance profitability with growth initiatives, drawing on more than 13 years in venture capital.

“It’s interesting. I moved out to San Francisco in 2001, so it was like getting to a really good party, imagine the best all-nighter party, but then getting there at 3 a.m. when everyone’s left and there are broken bottles everywhere. So I love companies that can survive difficult markets, and those are ones that have strong economic models and resilient teams.”

Jules invested in NerdWallet in 2015, when he joined our board of directors. Focused on later-stage venture investments in rapidly growing software and internet companies, his other investments include Dropbox, Grammarly, Hims, Slack, and MuleSoft. He was also actively involved in sourcing investments in Twitter and Yext.

Later in the month, Soo Boon Koh visited NerdWallet for a special NerdTalk in conjunction with NerdWomen, an employee-run group aimed at empowering women. Soo Boon is a founder and managing partner of Singapore-based iGlobe Partners, and she has over 25 years’ experience in finance and venture capital investing. Calling herself an “accidental VC,” Soo Boon described some of the challenges she faced as a woman in traditionally male-dominated industries, as well as her many successes and the support she received from the VC community, founders, co-investors and also her family.

Like Jules, Soo Boon invested in NerdWallet in 2015 and has been a board observer since.

IGlobe is an early-stage VC fund that invests from seed to Series B in technology companies. Its other investments include Unity Technology Inc., Matterport Inc., Scanadu Inc., Twist Bioscience Inc., Gingko Bioworks Inc. and ACSL Ltd.

NerdTalks is a series of informative, inspirational talks from industry leaders and innovators, designed to enrich NerdWallet’s culture of relentless self-improvement. Previous speakers include Drew Houston, CEO of Dropbox, and Gene Koo, assistant director of consumer engagement at the Consumer Financial Protection Bureau.