Getting an MBA was the “stupidest decision” of Cameron Merriman’s life.

Merriman, an ad operations manager in San Francisco, says the degree cost him $60,000 and has had little impact on his career.

“The first question employers at career fairs ask is where you got your degree, and unless you say Harvard, Princeton, Yale or Stanford, they don’t care,” says Merriman, 30, who earned his MBA in 2013 from Clarkson University in Potsdam, New York.

With the MBA plus other loans, Merriman’s student loan debt totaled $95,000 upon graduation. He set a goal to pay it off in five years, before he turned 30.

Today, Merriman lives debt-free and has two new goals: save for a down payment on a house on the East Coast and retire by 40.

Merriman contacted NerdWallet to share his story, which may inspire you to pay off your debt.

» SIGN UP: Set and track your own goal to ditch debt

Today my student loan debt is $0, and I have no credit card debt or car loans.

What triggered your decision to get out of debt?

I don’t like owing money. It’s a general personality thing. I grew up very poor.

Also, my mom co-signed the Parent PLUS loan. I had no money, but she had even less, and if I didn’t pay the loan, she would have had to. I didn’t want her to worry about that. She’s also getting older, and to take care of her and myself, I can’t have close to $100,000 in debt.

Knowing your base expenses and keeping them low is extremely important. My rent ranged from $800 to $1,600 a month. Public transit was $95 a month. I cover my family’s phone bill, which is $160 a month. Those are my hard costs. Everything else is variable. I can live on $200 a month for food if I need to.

To pay down my debt, I used the debt avalanche method, which saves the most on interest. You pay off the loans with the highest interest rates first. I paid off my 7% loans, then 6%, then 3%.

It is. When I first moved to San Francisco, I hustled really hard and found a room on Craigslist for $800 a month in a house with six other people plus the landlord. It was insanity. I lived in a tiny, 7-by-12 room.

In 2016, I upgraded to a 370-square-foot apartment in the Crocker Amazon neighborhood. I pay $1,600 a month, which is low for San Francisco. I live alone and the landlords live upstairs, but I never see them.

What were your other expenses?

I spent almost nothing on entertainment. Food ranged from $200 to $350 a month. I cooked all of my meals, except for the occasional Chipotle burrito. My total monthly expenses were around $2,200 per month.

What was your annual income?

I made around $60,000 a year at my first job. It was brutal because I sometimes paid more than $1,000 a month toward my student loans.

What were the biggest challenges you faced along the way?

Saying no to everything, including things that can be beneficial, like going out to happy hour with coworkers. Those are investments in your career, and you have to say no to all of it.

I had no relationships or vacations with friends. My friends rent a cabin on Lake Tahoe for the Fourth of July each year, and this was the first year I was able to go. It costs only $300 to $400, but that’s money I had been putting toward my student loans.

I go home for Christmas only every other year. Flying home to New York is $1,000 or more, and I couldn’t afford going every year.

Tallying up the total interest costs helped. If I’d repaid [the loans] over 20 years, I would have repaid almost double because of interest. I understand how compound interest works, and doing the math was terrifying.

What resources did you use?

I used a loan calculator, UnBury.Me, which adds up your loans and shows when they’ll be paid off. You can select one of two payment methods and see when your loan will be repaid if you contribute more.

How do you remain debt-free today?

I don’t make snap decisions with purchases. I write down the cost and sit on it for at least a month and save. At the end of the month, if I still really want it, I’ll buy it. A new phone is an example.

I’m also interested in the Financial Independence/Retire Early (FIRE) movement. One of my next goals is to save for a down payment on a house and retire by 40. I can’t have any debt if I want to accomplish that.

What advice would you give someone just starting out their debt-free journey?

You have to get comfortable with saying no and good at entertaining yourself. In San Francisco, I can go out for a walk, explore different areas of the city. I also like video games, Netflix and things like that, which are cheap. 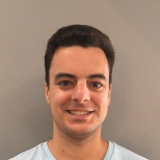 Steve Nicastro is a former NerdWallet authority on personal loans and small business. His work has been featured by The New York Times and MarketWatch. Read more