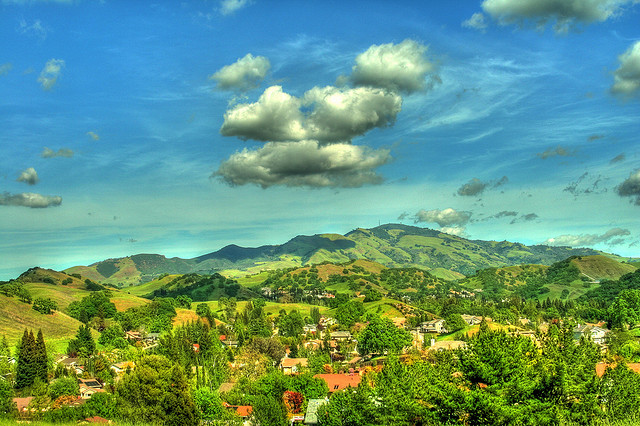 Although California’s economy has recovered from the recession, housing is a problem that persists. The Golden State’s housing shortage, coupled with stricter credit standards, has made homes in California among the most expensive in the nation. According to a 2014 report by the California Department of Housing and Community Development, 4 out of 5 of the least affordable U.S. metropolitan areas are in California. As well, the state has the largest share of households that pay more than 50 percent of their income toward housing costs.

Despite high housing costs, California remains a popular place to live with a 34-month population growth of 2.9%, compared with the national average of 2.4%. These conditions mean finding affordable housing in the state is more difficult than ever. NerdWallet, your trusted financial friend, crunched the data and found the top places in California for homeownership. Our analysis answered three main questions:

Here’s what the top places in California all had in common:

For more information on these and other places, check out NerdWallet Cities. For a full ranking of all 178 places analyzed in California for this study, click here.

Top 10 Cities for Homeownership in California

Once known as primarily a farming town, Brentwood has transformed itself into a residential community. With the highest population growth rate on our list (9.7% from 2010 to 2012), and a homeownership rate of 75.7%, Brentwood exhibits some of the healthiest signs of homeownership in the state. The city’s growing popularity is no wonder, given its proximity to the natural beauty at Mount Diablo State Park, Morgan Territory Regional Preserve and Sherman Island. Residents can also indulge in Brentwood’s agricultural sector by picking cherries or strawberries at local farms or they can take a break to enjoy one of Brentwood’s free Friday summer concerts. For those feeling guilty after enjoying the city’s sedentary and sweet comforts, don’t fret: Brentwood is one of 51 communities in California recognized by the League of American Bicyclists as “Bicycle Friendly.”

A suburb of Sacramento, Elk Grove makes our list as a family oriented community, with its affordable homeownership costs and high accessibility. The city is the second largest in Sacramento County (after Sacramento), and has easy access to Interstate 5 and Highway 99, as well as the Sacramento International Airport. The community of over 150,000 has a wide array of events and attractions, including the annual Strauss Festival, summer’s Multicultural Festival and the unique Elk Grove Rain Garden, an outdoor public space that was designed to attract wildlife and educate residents about water conservation. Elk Grove has also received high praise for its public education, with seven local schools in the past five years recognized as a California Distinguished School by the California Department of Education.

Located only 9 miles from Diamond Valley Lake, and with median homeowner costs of just $1,888 a month, Menifee joins our list as a city where affordability meets fun. As one of Southern California’s largest reservoirs, Diamond Valley Lake is world renowned for its diversity of fish, which residents are allowed to catch as long as they comply with the strict rules and inspection standards to prevent the spread of an invasive mussel. The lake boasts a visitor and science center, too, and spectacular wildflower blooms. Other favorite locations for activities include the Menifee Lakes Country Club, North Golf Course and the nearby Limestone Canyon Regional Park.

Next door to Menifee, Murrieta is another city that benefits from the natural beauty of Riverside County. With 12 trails in the city limits, and its close proximity to the Rancho Santa Rosa Historic Area and Lake Skinner County Park, Murrieta has a lot to offer. The city, which saw a strong population growth of 7%, has become a commuter community, with eight express buses serving residents traveling in every direction.

Lake Elsinore, located on the banks of the lake that bears the city’s name, has grown from a small resort town into a suburban community. The 3,000-acre lake is home to the Elm Grove Beach, Seaport and La Laguna boat launches and two R.V. parks. Lake Elsinore residents also live on the border of the Santa Ana Mountains, with a multitude of trails and the 5,689-foot Santiago Peak. Beyond the scenic beauty, the city has the claim to fame of hosting Elsinore Grand Pix, a nationally famous dirt-bike race that has lured competitors such as legendary actor Steve McQueen. If this isn’t enough excitement, there’s Lake Elsinore Diamond Stadium, where residents can watch the Lake Elsinore Storm play and see concerts, too.

Hacienda Heights, in the Puente Hills in Los Angeles County, joins our list with a 79.3% homeownership rate, the highest of our top 10. While Hacienda Heights has a number of features to be proud of — including top-rated elementary schools and close proximity to the 650,000-acre Angeles National Forest — it is best known for the Hsi Lai Temple, the largest Buddhist temple in North America. The temple, which showcases traditional Chinese architecture and draws visitors from the Los Angeles area and beyond, is free and open to the public. Hacienda Heights also has the benefit of being surrounded on three sides by nature reserves at Turnbull Canyon, Powder Canyon and Rose Hills Memorial Park.

Joining the list from San Bernardino County is Victorville, a highly affordable city about 85 miles east of Los Angeles. In Victorville, residents pay homeownership costs of  $1,641, the lowest on our list, while also benefiting from quick access to Riverside County via Interstate 15. The area also has quite a few educational and cultural attractions, with the Victor Valley Museum, California Route 66 Museum, Lewis Center for Educational Research and Victor Valley College all located in the county. Residents seeking live entertainment will find options on stage at the Victor Valley College Performing Arts Center and the nearby San Manuel Amphitheater.

Perris is a city with the perfect ingredients for a high return on home investment: low homeowner costs coupled with strong population expansion. Monthly median homeowner costs are the second lowest of our top 10 at $1,693, and the median home value is just $162,100, which is about half of the median in the state. However, cheap home prices don’t mean residents have to settle: Perris locals sit on top of Lake Perris State Recreation Area, a hot spot for boating, swimming, camping and horseback riding. Perris also has other excitement at the fairgrounds, auto speedway and at the airport, which is the site of skydiving expeditions.

Located in the East Bay of the San Francisco Bay Area, San Ramon has a reputation as a wealthy suburb with an easy commute to San Francisco. A high median home value of $704,000 is balanced by median monthly household incomes of over $10,000, which means homeownership costs in San Ramon are among the lowest percentage of household income of our top 10 cities. For families, San Ramon is worth the price: Public schools in the city have an average rating of 9.3 out of 10, according to greatschools.org. Workers have the option of commuting to downtown San Francisco in under an hour via BART trains, although San Ramon has a strong economy supported by the world headquarters of Chevron Corp. and a regional AT&T office.

The last, and most southern of our cities in Riverside County, Temecula is a destination both for homeownership and tourism. Hundreds of award-winning wines, produced by 31 wineries in Temecula Valley, fuel tourism and local fame. The fun doesn’t stop there, as the city also hosts the annual Temecula Valley Balloon & Wine Festival and an international film festival. And for those not entertained by wine and movies, Temecula is a short drive to Pala Casino Resort and Spa in northern San Diego County.

Check out the interactive map for our top 10 cities in California. The darker the color of of the point, the more affordable it is according to our affordability score. Click on points to view more information.

This study analyzed 178 communities in California with a population of 50,000 or more.