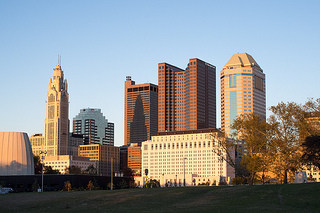 Ohio was one of the states hit hardest by the economic downturn, with the Bureau of Labor Statistics estimating that Ohio lost just shy of 300,000 jobs over the 18-month recession. While the state’s economic recovery has been a slow process, recent figures show the unemployment rate has dropped from 7.4% just a year ago to 5.5% in May. Additionally, Ohio’s efforts to revitalize its aerospace industry and encourage foreign investment appear to have been successful, with over 438 aviation firms now operating in the state.

Homeownership in Ohio is within reach for most buyers with median monthly homeowner costs at less than 30% of income, which meets the U.S. Department of Housing and Urban Development’s standard for affordability. Coupled with an upswing in the state’s economy, purchasing a home in Ohio is likely to be a good investment.

NerdWallet crunched the numbers to find the best cities for homeownership in Ohio. Our analysis answers three main questions:

Here’s what the top cities in Ohio had in common:

For a full ranking of all 183 cities analyzed in Ohio for this study, click here.

Does the data tell you truth? Let us know what you think about our list in our comments section.

Top 10 Cities for Homeownership in Ohio

Pickerington, a Columbus suburb, tops our homeownership list as the second fastest-growing city in the state from 2010 to 2012, according to U.S. Census Bureau data. With over 62 colleges and successful ventures by public-private partnerships, the Columbus region has seen a recent boost in job creation. In addition to employment opportunities in Columbus, Pickerington residents have access to jobs elsewhere in Fairfield County, which is also home to several international companies including EveryWare Global, a manufacturer of kitchen and dining products, Ralston Foods and Nifco America, a plastics fasteners manufacturer. And for those concerned about all work and no play, Pickerington is home to the Motorcycle Hall of Fame Museum and the Violet Festival.

Dent is a census-designated place in Hamilton County’s Green Township. The area saw an 8.6% population increase, the biggest on our list, from 2010 to 2012. Dent’s popularity is probably linked to steady economic growth in the greater Cincinnati area. In addition to efforts to spur the economy by groups such as REDI Cincinnati, Dent has also been a beneficiary of local economic initiatives from the Hamilton County Development Company. These initiatives appear to be paying off for Dent, which has an unemployment rate of only 3%.

With a population of just over 11,000, and a homeownership rate of 96.1%, Powell has a reputation as a pleasant bedroom community for families seeking a small-town atmosphere with close proximity to a big city. Even with its short commute to Columbus, the city has preserved its culture and the historic downtown.  A host of other factors — including a public school system ranked “excellent” by Ohio’s Department of Education, and nearby attractions such as the Columbus Zoo and Aquarium — contribute to Powell’s high median home value, which ranks second in Ohio.

As North Ridgeville’s smaller and slightly pricier neighbor, Avon earned its rank on our list with its 7.2% rate of population growth from 2010 to 2012, and a high median home value of $252,800. Avon, which is close to Lake Erie, is a quick drive to Miller Nature Preserve, a favorite place to launch a boat, swim and fish. While Avon’s dedication to education shows in its 100% rating by state education officials, its dedication to fun is on display at its annual Duck Tape Festival.

Macedonia made our list with a high homeownership rate of 91.4%. While technically part of the Akron metropolitan area, Macedonia is a nearly equidistant commute from Akron or Cleveland. Macedonia’s location is not only ideal for commuting, but it is also several minutes from the sprawling 33,000-acre Cuyahoga Valley National Park. Macedonia is part of Nordonia Hills, several small towns that share public school systems and a chamber of commerce.

This census-designated place is the second of three locations on our list in Hamilton County. Bridgetown is the second-most affordable place on our list with median monthly homeownership costs of $1,316. The area, which was incorporated as Bridgetown North until 2010, is a prime destination for outdoor enthusiasts, since it is between the 4,300-acre Miami Whitewater Forest and the 1,500-acre Mount Airy Forest. Farther west, residents can find Mitchell Memorial Forest, which is known for its mountain-biking trails.

The city, just 13 miles outside Columbus, benefits from its proximity to the capital and Ohio State University. Its higher median home value of $206,800 is balanced by a strong economy and Hilliard’s rank as the city with the second-highest median household income of our top 10 cities. High schools in the Hilliard School District have won several state championships in various sports while maintaining a graduation rate of 93.8%.

Located halfway between Dayton and Cincinnati, Trenton is the perfect match for those looking for an affordable home in southwestern Ohio’s growing economy. At just $1,332, Trenton has the second-lowest monthly homeownership costs out of our top 10 cities. Top employers in the area include GE Aviation, Mercy Regional Medical Center, P&G and AK Steel. Trenton is also close to several nationally ranked hospitals and the Dayton International and Cleveland Hopkins International airports.

Rounding out the top 10 is Mack, a census-designated place and our third entry from Hamilton County. Although home prices in Mack are relatively expensive at $223,000, it has the highest homeownership rate on our list at 97.3%. Like the other places in Hamilton County, Mack benefits from its location at the corner of Ohio, Kentucky and Indiana and its proximity to parks. With an unemployment rate of 3.7%, and a median annual income of $82,800, Mack also appears to be financially stable.

Check out the interactive map for our top 10 cities in Ohio. The darker the color of of the point, the more affordable it is according to our affordability score. Click on points to view more information.

For this study we analyzed 183 places in Ohio with more than 10,000 residents.