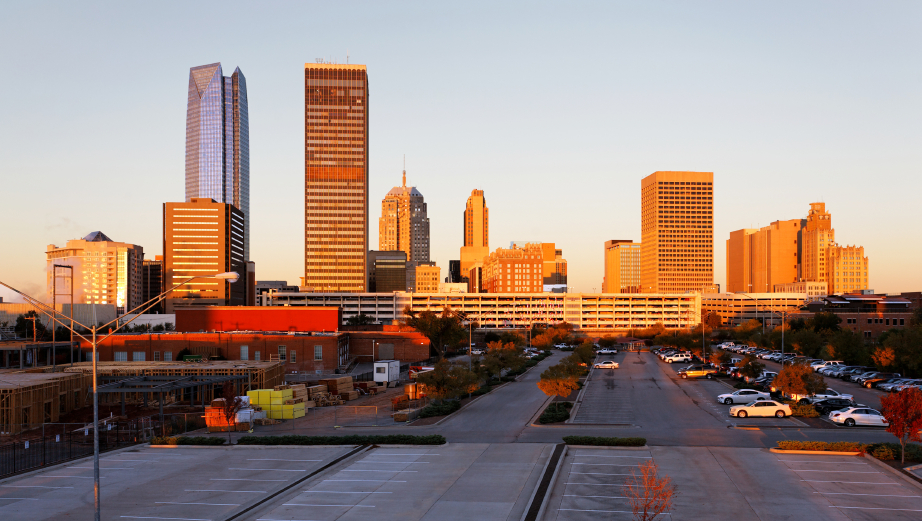 Oklahoma has been the epicenter of the nation’s oil and gas boom in recent years, making it the fifth-biggest oil producer in the country, and fourth-biggest natural gas producer, according to the U.S. Energy Information Administration.

Hydraulic fracturing, or fracking, the method of extracting natural gas from shale rock, was invented in Oklahoma by Pan American Petroleum in 1968, and since then, the number of firms – and investment dollars – dedicated to this industry has jumped in the Sooner State.

Oklahoma’s real estate market has seen major benefits from the expansion of the oil industry. According to a NerdWallet analysis, there’s a correlation of 0.93 — 1.0 is perfect — between the Zillow Home Value Index for Oklahoma and the number of employees in the nation’s oil and gas sector since 2000.

For buyers looking to invest in Oklahoma real estate, the combination of some of the lowest property taxes in the nation, and the strength of the U.S. oil industry, indicate that the state likely will continue to be home to a strong market.

NerdWallet crunched the numbers for 74 places to find the cities and towns that are likely to be the best for real estate investors in Oklahoma.

Metro Oklahoma City is booming. Six of the top 10 places are within 40 miles of Oklahoma City, the economic heart of the state and home to Fortune 500 companies, including Chesapeake Energy and Devon Energy.
Not just big cities. Three places in the top 10 have populations under 10,000 —Cushing, Purcell and Wagoner — while three have populations over 30,000 — Shawnee, Moore and Stillwater — so investors will find options.
Affordable communities. The average sale price per square foot in the top 10 is $70.53, which is 14% below the statewide median of $82.25.

Market health. We looked at how quickly houses sold compared with other cities in the state.
Price per square foot. Weighting for affordability, we measured the price per square foot of housing in a city, averaging all of 2013 and 2014 to avoid seasonal fluctuations.
10-year housing price change. Averaging monthly price data since 2004, we examined the percentage of houses that increased in value over the past 10 years.
Property taxes. Using state data, we calculated the city and county property tax for each city.
Change in vacancy rate. We used U.S. Census Bureau data to see how vacancy rates have changed from 2010 to 2013.

Our list of the best places to invest in real estate in Oklahoma doesn’t include cities and other communities with incomplete data. We also didn’t include places with residency restrictions, such as American Indian reservations and retirement communities.

Best places to invest in real estate in Oklahoma

Cushing may be best known by commodity traders and markets junkies for its role in oil trading, but it ranks as our top place to invest in real estate in Oklahoma because of its affordability and growth in home values. Cushing’s $41.78 per-square-foot sale price from 2013 to 2014 is the lowest in the state, and 61.54% of homes increased in value over the past decade, the second-best mark in the top 10.

With a population of 6,175, Purcell is the smallest town in the top 10, but its recent momentum in real estate markets helped push it up to the second spot on our list. Purcell saw the biggest decline in vacancy rate in the state from 2010 to 2013, with the number of empty units falling 7.9% over the period. It is also one of the fastest-growing towns in the top 10, with a population increase of 6.37% from 2010 to 2013.

El Reno’s downtown has been the focus of a redevelopment program in recent years, and it is now the cultural and economic heart of Canadian County. Its property market has remained affordable, with a $61.64 per-square-foot sale price in the past two years. El Reno, which sits on historic Route 66, also benefits from its location only 31 miles from downtown Oklahoma City. El Reno ranked fifth in NerdWallet’s Cities on the Rise in Oklahoma.

While Shawnee can take credit for giving us Brad Pitt, the town can be given credit for the health of its local real estate market. The sale price of $62.37 per square foot is among the lowest in the top 10, and vacancy rates have dropped 1.2% in recent years. Shawnee’s downtown features a number of elaborate, historic buildings that date back to the area’s oil boom in the early 20th century.

Guthrie is a critical piece of Oklahoma history: it was the state’s first capital and it was quickly developed after President Benjamin Harrison encouraged settlement in the Territory of Oklahoma. The town’s history is still on display today, with its turn-of-the-century architecture that defines the downtown, which is designated a national historic landmark. Guthrie’s property market is thriving as well — it has the second-highest market health score in the top 10.

In recent years, parts of Moore have been devastated by a series of tornadoes, including an EF5 tornado in 2013 that caused $2 billion in damage. However, the community has proven resilient, and since 2010, Moore has seen the highest population growth in the top 10, with a 7.53% jump to 56,460 residents. Moore also has one of the strongest property markets in the region, scoring an 8.81 out of 10 in the Zillow Market Health Score. Moore benefits from its location — between the largest city, Oklahoma City, and Norman, the state’s third-largest city.

Wagoner is the highest-ranked greater Tulsa city in the top 10, and its location allows residents of this community of 8,461 to maintain a small-town feel with easy access to a bigger city. It is also located on Fort Gibson Lake, one of the most scenic places in the state, and a place for boating and fishing adventures. Wagoner has seen a 2.4% drop in the vacancy rate in recent years, the second-largest decrease in the top 10. It is also the second-most affordable city in the top 10, with an average sale price of $59.67 per square foot in the past two years.

It may be the home of Oklahoma State University, but Stillwater is more dynamic than a standard college town. The city features a number of art museums, a quaint and walkable downtown and it is only an hour drive to Oklahoma City or Tulsa. Stillwater scored a 9.85 out of 10, the highest market health score in the state, according to Zillow. An average of 65% of properties have increased in value over the past 10 years, the highest mark in the top 10.

Tahlequah has one of the most unique histories of any city in Oklahoma: it has been the capital of two Cherokee tribes since the early 1800s, a designation that has continued to influence the town’s style and culture. Its location at the foot of the Ozark Mountains and the nearby Illinois River provides plenty of recreational opportunities, and Northeastern State University ensures a variety of educational and other opportunities throughout the year.

Yukon is the fifth Greater Oklahoma City town in the top 10, and like its regional cohorts, it has benefitted from a strong property market and recent population growth. Yukon’s market health score of 8.96 out of 10 is the second-highest mark in the top 10. Since 2010, the town has grown nearly 6%, the second-highest increase in the top 10. The town celebrates its Czech heritage with the annual Oklahoma Czech Festival, featuring a parade beginning at Main Street and Garth Brooks Boulevard.

Check out this interactive map of NerdWallet’s top 10 cities for real estate investment in Oklahoma. Click on an icon to see each place’s overall score.

Our final list doesn’t include 37 places that lacked complete data, and places with residency restrictions, such as American Indian reservations, military bases and retirement communities.

Note: The tax rates we used are baseline rates for county taxes, and don’t include school and other taxes. We estimated tax rates when a county didn’t organize taxes by allocation.

The investment score for each city was derived from the following measures:

1. Market health score. This score is an average of Zillow’s 2014 market health score for each city, along with U.S. Census Bureau figures on changes in vacancy rates. Zillow’s Market Health Index uses a combination of 10 variables, including housing value recovery and median days on the market, to measure the health of a city’s housing market relative to others in the state. The quicker a house sells, the higher the score — a 10 is the highest. This is 30% of our score.

2. Affordability. Using data from Zillow, we negatively indexed a house’s cost per square foot in each city to find how much a buyer could get for their dollar. The higher the score, the lower the cost per square foot. To avoid seasonal fluctuations, we averaged data from the 24 months of 2013 and 2014. This is 20% of our score.

3. Growth score. Using data from Zillow and the U.S. Census Bureau’s 2013 American Community Survey, we averaged the percentage of houses that increased in value over the past 10 years, along with growth in population since 2010. This is 40% of our score.

4. Tax rate. Using data collected from each county’s treasurer or assessor’s office, we calculated the county property tax rate for each place. In Oklahoma, property taxes are collected and distributed on the county level. All tax rates are per $1,000 of assessed housing valuation. This is 10% of our score.

The skyline of Oklahoma City, Oklahoma, is shown at sunrise in this image via iStock.