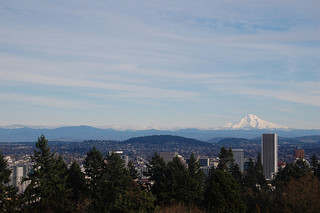 Oregon’s economy is on the rise. The state’s Office of Economic Analysis saw Oregon’s jobs, household income and tax revenue rise over the past few months. Not all places offer the same economic opportunities and cost of living, however. To help, NerdWallet crunched the numbers to find the best places for job seekers in Oregon.

The Best Places in Oregon for Job Seekers

Located in north-central Oregon, Hood River County is a part of the Columbia River Gorge. Locals have access to many outdoor recreational activities such as windsurfing, kiteboarding, cycling and mountain biking – the county seat, Hood River, was recognized as a Next Great Adventure Town by National Geographic. The county saw a working-age population increase of 4.3 percent between 2009 and 2011, and its unemployment rate was only 4.6 percent in October 2013. Major employers include Providence Hood River Memorial Hospital, Cardinal Glass Industries and Diamond Fruit Growers. Residents of Hood River County can find a Worksource Oregon Center in Hood River. Job seekers can find job training programs, apprenticeship programs and job search assistance. The Mid-Columbia Economic Development District helps develop the economies of the five counties bordering the Columbia River in Washington and Oregon. They offer business assistance and technical help to local industries.

Located in western Oregon, Benton County is situated in the Willamette Valley region. Its largest city and county seat is Corvallis, the 10th most populous city in Oregon. From 2009 to 2011, Benton County saw a working-age population growth of 5.8 percent, and its households earned a median income of $47,716 in 2011. The largest employers in the area include Oregon State University, Samaritan Health Services and Hewlett-Packard. Corvallis is home to Oregon State University and the Benton Center of the Linn-Benton Community College. OSU has a Professional and Noncredit Education program that provides courses, workshops and other services to help workers gain certificates and new skills. The Linn-Benton Community College helps locals gain new skills through their Community Education Program while local businesses can find customized training programs through the Business Development Program.

Wasco County is located in north-central Oregon, on the Washington-Oregon state border. The Dalles, the county seat and largest city in Wasco County, sits on the southern banks of the Columbia River. Wasco County saw a working-age population growth of 5.9 percent from 2009 to 2011 while its unemployment rate in October 2013 was only 6.6 percent. Major employers in Wasco County include the Mid-Columbia Medical Center, Oregon Cherry Growers and Google, which opened a data center in The Dalles in 2006. The Dalles is also home to Columbia Gorge Community College, another large employer in the area. The college offers a Small Business Development Center that helps local businesses gain the resources and counseling help they need.

Umatilla is located in northeastern Oregon, bordering Washington. The county seat, Pendleton, sits on the Umatilla River, a tributary of the Columbia River, while the largest city in the county is Hermiston. The area is home to plenty of outdoor recreation. Umatilla County saw a working-age population growth of 3.4 percent between 2009 and 2011 while households earned a median income of $45,911 in 2011. The county’s largest employers include the Confederated Tribes of the Umatilla Indian Reservation and Keystone RV. Pendleton has a branch of the Oregon Small Business Development Center, which provides advising, training and other resources for small businesses.

Washington County, the second-most populous county in Oregon, is located in northwestern Oregon and is part of the Portland metropolitan area. The county seat, Hillsboro, is the largest city in the county and the fifth-largest city in Oregon. Households in Washington County earned a median income of $63,814 in 2011 while its unemployment rate was 5.9 percent in October 2013. Major employers in Washington County include Intel, Nike, Providence St. Vincent Medical Center and Columbia Sportswear. Forest Grove, located 25 miles west of Portland, is home to Pacific University, which has a Career Development Center that helps students and alumni by providing job search resources, hosting job fairs and offering career counseling.

Yamhill County is located in Willamette Valley in northwestern Oregon, 35 miles southwest of Portland. The county is bordered by the Willamette River to the east, and McMinnville is the largest city in the county as well as the county seat. The county saw a working-age population growth of 2.9 percent between 2009 and 2011 while its median household income was $53,819 in 2011. Yamhill County’s major employers include A-dec, George Fox University and Cascade Steel Rolling Mills. Job Growers Incorporated serves Marion, Polk and Yamhill Counties by helping local businesses find workforce solutions and local job seekers obtain appropriate training. McMinnville is home to the Yamhill branch. McMinnville is also home to Chemeketa Community College, which has a Yamhill Campus, and Linfield College, which offers adult-education classes online as well as professional certifications.

Multnomah County is located in northwestern Oregon, bordering Washington, and it is the state’s most populous county. The county is home to Portland, the state’s largest city. The county saw a working-age population growth of 4.5 percent from 2009 to 2011, and its households earned a median of $50,726 in 2011. Additionally, Multnomah County’s largest employers include Intel, Providence Health & Services and Oregon Health and Science University. Portland is a hub of higher education, home to colleges such as Portland State University, the University of Portland and Lewis & Clark College. The University of Oregon also calls Portland home, and its Career Center helps students by offering career counseling, workshops and information on jobs and internships. For job seekers, the Portland Metropolitan Workforce Training Center is situated in northeast Portland and offers an employment and training program.

Union County is located in northeastern Oregon and is situated between the Blue and the Wallowa Mountains. The county was established in 1864, and its top industries include agriculture, forest products and manufacturing. Union County saw a working-age population growth of 3.8 percent from 2009 to 2011, and its monthly homeowner costs are low, at just $1,138 a month. The largest employers in Union County include Grande Ronde Hospital, Eastern Oregon University and Union Pacific Railroad. The Northeast Oregon Economic Development District helps entrepreneurs start businesses by providing workshops and counseling, business loans and information on endowments. Le Grande is home to Eastern Oregon University, which provides courses on career exploration, job listings and job search assistance.

Columbia County is located in northwestern Oregon, bordered by the Columbia River to the north and to the east. The county is bordered by Multnomah and Washington Counties to the south and is located 30 minutes away from Portland. Columbia County’s households earned a median income of $56,270 in 2011 while their monthly homeowner costs was only $1,468. The county’s largest employers include Fred Meyer, Armstrong World Industries and Boise Cascade. The Columbia County Economic Team helps develop the region’s economy by recruiting new businesses and helping local businesses thrive. Portland Community College has a St. Helens location. Their Career Resource Centers offer students career assessments, job counseling and information on educational and training requirements.

The overall score for each county was derived from the following measures:

28 counties and equivalents designated by the U.S. Census were included in this analysis. Only counties with a population over 10,000 were considered.