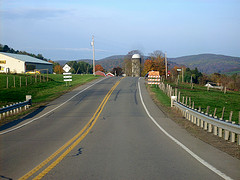 Pennsylvania’s job market is a reflection of the national market: still recovering. Even though Moody’s Analytics ranks it 41st in the nation for expected job growth in 2014, there are bright spots for job seekers. The Marcellus shale drilling industry has buoyed the jobs outlook in the western region of the state and the health care industry employs thousands statewide. NerdWallet crunched the data to find the best cities for job seekers in Pennsylvania.

The Best Towns in Pennsylvania for Job Seekers

Located 84 miles northwest of Baltimore and 55 miles west of the state capital of Harrisburg, this central Pennsylvania city is a blend of suburbs and farmlands where workers say they’ve found a great work-life balance. The area’s top employers include Summit Health, a Target distribution center and Letterkenny Army Depot. The city is booming- it grew by 11.6 percent between 2009 and 2012, according to U.S. Census Bureau data crunched by NerdWallet. That’s more than any other city in our top 10 list. For job seekers, the Franklin County Works career portal lets job seekers create profiles and upload resumes for employers looking to hire. The statewide PA CareerLink system for job seekers has a regional office in Chambersburg, where job seekers can get help with resumes, interviewing, take civil service tests for jobs in state and local government and apply for on-the-job training opportunities. The median household income is on the low side at $39,491 per year, but the monthly homeowner costs are equally low at just $1,159 per month.

Located in the eastern Pittsburgh suburbs, this borough has one of the lowest unemployment rates among our top 10 towns at just 4.8 percent. Job seekers here have all the resources of Pittsburgh at their disposal, but can also enjoy the slower pace of life in Plum, where the suburbs meet farmland. For tech-minded job seekers, Pittsburgh Technology Council offers an online job board linking employers and potential employees across southwestern Pennsylvania. The Center for Professional Development at Community College of Allegheny County offers workforce-training programs for health care jobs including nursing and geriatrics. Pittsburgh-area JobLinks, a nonprofit workforce development agency, offers mock interviews, resume help and career counseling along with its Health Employment Access program which trains job seekers for work as nursing assistants and home health aides. Plum residents can also find jobs in the Marcellus shale and natural gas drilling industry, which has created about 28,000 jobs in southwestern Pennsylvania in the last few years. ShaleNet, an online career guide created by the natural gas companies, offers job seekers information on training and career opportunities in drilling throughout the region.

Just 30 miles away from Plum, Bethel Park sits on the south side of Pittsburgh and just like Plum, it has a low unemployment rate of 4.8 percent. The largest employers in town are Giant Eagle markets, Macy’s department store and University of Pittsburgh Medical Center. Job seekers in Bethel Park can access the same resources available to Plum residents, along with job training at Three Rivers Workforce Investment Board for work in health care, manufacturing and energy, which are three of the most in-demand and lucrative job fields in western Pennsylvania.

Located further east of the city than our two other Pittsburgh-area picks, Monroeville offers jobs in health care and engineering and a family-friendly lifestyle. Each year, homeowners compete for the prize of best Christmas decorations and residents gather each summer for the Monroeville Jazz Festival. The biggest employers in town are Forbes Regional Hospital, Bechtel National Inc., an engineering firm, and Procare Pharmacy, a pharmaceutical distribution center for CVS Pharmacy in western Pennsylvania. Job seekers can earn certifications and get help finding work through Forbes Road Career and Technology Center located in town.  For locals interested in careers in heavy industry, the state of Pennsylvania offers financial aid for training in specific fields, including energy, advanced materials and diversified manufacturing and agriculture and food production.

Best known for being the home to the largest shopping mall in America, King of Prussia is an original Philadelphia suburb going through a rebirth. Designed for car-dependent suburbanites of the 1950s, the city is pursuing zoning changes to allow for mixed-use developments so people can live closer to where they work. Residents here earn more than our top five cities with a median household income of $75,025 per year. The largest employers in the area include Lockheed Martin, GlaxoSmithKline and Kravco retail development group. Job seekers can beef up their skills through adult education programs at Arcadia University’s satellite campus in town, or get career counseling and interview help at PA Careerlink’s Montgomery County office.

Job seekers in this Pittsburgh suburb have a lot of options, between the downtown Pittsburgh jobs in health and technology and local jobs in government. People here are smart- almost 69 percent of adults completed a bachelor’s degree. Upper St. Clair has the highest median household income of our top 10 Pennsylvania cities for job seekers at $108,373 per year and the highest monthly homeowner expenses at $2,010 per month. But it also has award-winning public schools and access to job resources from New Century Careers, a Pittsburgh non-profit that offers training for in-demand manufacturing jobs and connects students with over 160 local employers.

Located an hour outside of Pittsburgh, Murrysville “looks rural” by design. But don’t let the bucolic setting fool you- Murrysville is home to the regional headquarters of PNC Bank and just miles from University of Pittsburgh Medical Center’s newest health care center. Job seekers here have many opportunities in the Marcellus Shale energy sector, and Westmoreland County Community College offers specialized training for jobs in natural gas and oil, mechatronics, petroleum and industrial processing and occupational health and safety.   The median household income here is higher than most of NerdWallet’s top 10 Pennsylvania cities for job seekers at $87,107 per year, but the monthly homeowner expenses are lower than some of our other top picks at $1,722 per month.

Located about 30 miles north of the state capital Harrisburg, Lebanon sits in the heart of Pennsylvania Dutch Country and close to Hershey, the home to the world-famous chocolate company. But there’s more to Lebanon than horse-drawn buggies and candy bars. The city grew by 5.8 percent between 2009 and 2012, according to Census data crunched by NerdWallet. It also has the lowest monthly homeowner costs of our top 10 picks at just $1,009 per month.  Job seekers here can get help with finding in-demand careers in the region at the Pennsylvania Workforce Development Board office in town. Lebanon County Career and Technology Center offers customized job training developed with local companies, including Cleaver Books and Henry Molded Products, so that job seekers get the skills local employers need.

This city was once synonymous with the Amish community in south central Pennsylvania, but with a 7.1 percent growth rate and low monthly homeowner expenses, there’s more to Lancaster than farms. Located between Baltimore and Harrisburg, Lancaster is home to R.R. Donnelly and Sons printing and Turkey Hill Dairy Inc. The most in-demand jobs in the community include truck drivers, registered nurses, office clerks and elementary school teachers. To get these and other jobs, residents can tap the resources of the Lancaster County Workforce Investment Board, which offers troves of online resources as well as connections to businesses in the area. PA CareerLink also has a large office in town.