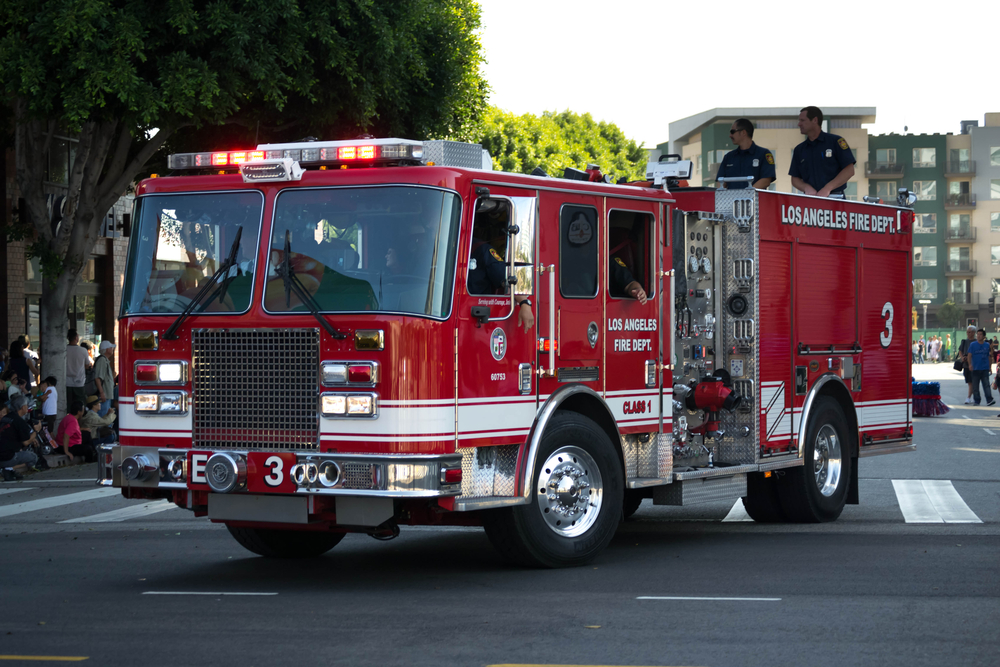 It’s no secret that the Great Recession of 2008 had a devastating impact on the United States: the unemployment rate spiked and the federal deficit reached an all-time high, while the housing market collapsed and consumer spending plummeted. City revenues and spending on local programs also felt the effects. According to reports from the Department of Justice and the Urban Fire Forum, even essential programs like public safety were hit hard by budget and staff cuts brought on by the economic bust.

Police, fire and emergency medical services are a vital component of every community, and cuts to these services can have drastic consequences. Reductions in fire department personnel can mean slower EMS response times and have a direct impact on the chances of survival for traumatic medical patients. Polls highlighted by the DOJ reveal that reductions to police budgets and staff have forced some law enforcement agencies to stop responding to motor vehicle thefts and burglar alarms. According to a study by the Major Cities Chiefs Police Association, 26% of law enforcement agencies have reported a reduction in investigation follow-ups related to property crimes, financial crimes, narcotics and traffic cases.

Cities That Invest the Most Resources in Public Safety

With more than 68 police staff for every 10,000 residents, the nation’s capital has the highest police-to-population ratio of any city we analyzed. The Metropolitan Police Department makes a concerted effort toward community policing, fostering relationships with local residents, business owners and organizations to better solve crimes and deter criminal activity. The 2007 All Hands on Deck initiative, which assigned officers to a citywide street patrol for 48 hours to engage with residents and stem increases in summer crime, is just one example of MPD’s community policing focus. Despite some growing pains, All Hands on Deck is now one of the department’s regularly used crime-fighting tools.

The Washington, D.C., Fire and Emergency Medical Services Department provides both fire suppression and emergency medical services to the nation’s capital. In 2013, DCFEMS reported an average EMS response time—that is, the time it takes for the first emergency medical technician to arrive at a critical EMS call—of less than five minutes in 10 of 12 months and less than four minutes in four of those months. Beyond preforming its routine duties, DCFEMS also offers CPR certification training on the first and third Thursday of every month.

Birmingham has more fire staff per capita than any other city in our study. The Birmingham Fire Rescue Service, headed by Chief Ivor Brooks, is the largest fire department in Alabama—operating 32 stations and responding to approximately 48,000 calls in a typical year, more than 80% of which are emergency medical service requests. Birmingham Fire Rescue Service also has an experienced hazardous materials response unit that answers an average of 100 calls a year.

Birmingham has more than 52 police staff for every 10,000 residents. Unfortunately, Birmingham still has some of the highest property crime rates of any city on our list. In a phone interview with NerdWallet, the Birmingham Police Department‘s public information officer, Lt. Sean Edwards, emphasized that the department receives significant support from the mayor’s office to do its job. And one of the ways the Birmingham PD curbs violent crime is with advanced policing technology like ShotSpotter, a gunfire alert system that instantly triangulates and reports gunshots to the department.

The Baltimore City Fire Department has more than 27 fire staff for every 10,000 residents and offers an extensive infrastructure of fire, EMS and special operations teams. The department responds to more than 270,000 emergencies per year, and also operates 36 advanced life support medic units. The Baltimore City Community Emergency Response Team, another public safety service offered by the city, trains community members to help their neighborhoods in the event of large-scale disasters that could overwhelm government resources.

With more than 53 police staff for every 10,000 residents, Baltimore is devoting resources to reduce crime and foster a healthy community to live in. Police efforts helped reduce violent crime by 5.65% between 2010 and 2012, according to FBI data. The Baltimore Police Department also encourages citizens to deter crime through its block watch program. Civilian block watchers can anonymously provide information on suspicious and criminal activity to the police, providing the department with extra sets of eyes and ears.

The St. Louis Metropolitan Police Department has more than 58 police staff for every 10,000 residents, and they certainly appear to be doing a good job. Between 2010 and 2012 both violent crime and property crime rates fell in the city by 8.76% and 19.50%, respectively. On top of preventing and responding to crime, St. Louis police officers are active in the community. For example, they provide local schools with Gang Resistance Education and Training. Since SLMPD began participating in this federal program in 2006, the department has instructed more than 2,000 local students on communication, decision-making and anger management. In partnership with other local police agencies, SLMPD also operates an aviation unit capable of providing around-the-clock aerial surveillance of more than 1,600 square miles.

The St. Louis Fire Department has 30 stations throughout the city and operates nine engine companies, 20 ladder truck companies, and five hook-and-ladder companies that can reach spaces more than 100 feet off the ground. The department also has two heavy rescue squads equipped to rescue victims trapped in wrecked automobiles, elevators and collapsed buildings. Every firefighter in the department is a medical first responder, emergency medical technician or paramedic. The department operates on a concept they call the chain of survival: for every life-threatening emergency, it dispatches both a fire engine company and the closest available advanced life support ambulance.

Memphis has nearly 30 fire personnel for every 10,000 residents, one of the highest ratios among cities we analyzed. The Memphis Fire Department provides a range of services, including rope, structural collapse, confined space, trench and water rescue, as well as hazardous-material response. The department operates 36 advanced life support ambulances, 56 advanced life support fire engines and 21 basic life support ladder truck companies. As the largest EMS provider in Tennessee, the department conducted 111,680 EMS runs and transported more than 78,000 medical patients in 2013. Every firefighter is a paramedic, EMT or certified first responder.

In fiscal year 2011 the Memphis Police Department put approximately 90% of its budget toward personnel. The MPD focuses on strategic, data-informed crime fighting and prevention. Emblematic of this approach is Operation Blue CRUSH, which analyzes information on crime types, locations and the times of day and week when crimes occur. This program, which is now an integral part of the agency, allows the department to pinpoint hot spots for crime and strategically deploy resources in those areas.

The Hartford Police Department is committed to reducing crime in the city, especially crimes of a violent nature. In 2011, the city created the Shooting Task Force, a partnership between the HPD and state and federal law enforcement aimed at reducing gun violence in the city. In less than a year, the city saw a 42.3% drop in homicides and a 29.4% reduction in firearm assaults of the first degree.

The New Haven Police Department operates across 10 districts and has more than 35 police staff for every 10,000 residents. Between 2010 and 2012 the city saw a 9.83% decrease in property crime and a 6.12% decrease in violent crime. Beyond crime prevention, the NHPD tries to stay active in the community. Part of the way they do this is through anti-gang programs like GREAT and the Police Activities League, which sponsors athletic and educational after-school programs for the New Haven’s youth.

With more than 31 fire personnel for every 10,000 residents, the New Haven Fire Department has the second-highest staff-to-population ratio of the cities in our study. The NHFD is equipped to handle emergencies such as high-angle rescue, vehicle extrication, confined-space rescue and spills of hazardous material. The department also employs state-of-the-art technology, such as thermal imagers that allow firefighters to see through smoke at fire-suppression incidents.

The largest city in New Jersey has the fire resources to match its population, with more than 25 fire personnel for every 10,000 residents. The Newark Fire Department divides its resources across five wards and 17 fire stations. Beyond providing the city with fire and emergency medical services, the NFD offers hazardous-material response, marine operations, confined-space rescue, technical rescue, building-collapse rescue and vehicle extrication. The department’s community relations division also informs residents about fire prevention and fire safety practices.

The Newark Police Department has more than 47 personnel for every 10,000 residents. Like many other departments across the nation, the NPD informs its decision-making and ensures effective resource allocation by statistically analyzing crime data. Unfortunately, Newark’s violent and property crime actually increased between 2010 and 2012. The department has also received numerous citizen complaints alleging police misconduct and was the subject of a federal investigation. The Newark Star-Ledger reported that the Justice Department is expected to appoint a federal watchdog to monitor the NPD’s activities and procedures later this year.

The Boston Police Department, headed by Commissioner William B. Evans, appears to be effectively deterring and responding to criminal activity: The city boasts low rates of violent and property crime, and they are continuing to go down. Between 2010 and 2012 violent crime decreased by 9.5% and property crime fell by 11%.  Boston is also committed to providing a full array of fire and emergency medical services. In fiscal year 2010, the Boston Fire Department responded to 69,859 total incidents, 72% of which received response in less than four minutes. At least part of the reason for the city’s success is its investment in fire department resources: There are more than 26 fire personnel for every 10,000 residents.

Atlanta, the capital of Georgia and its most populous city, devotes a considerable amount of resources toward public safety. Atlanta has more than 49 police personnel and 22 fire personnel for every 10,000 residents. Firefighters from 35 stations across the city responded to 96,890 calls in 2012. Beyond fire suppression and emergency medical services, one of the Atlanta Fire Rescue Department’s major commitments is fire prevention. The Atlanta Smoke Alarm Program offers smoke alarm and carbon monoxide detector installation free of charge to any home in the city. The AFRD also partners with the Atlanta Citizens Emergency Response Team to train residents to prepare their neighborhoods in the event of a disaster, as well as to teach them basic medical skills and ways to identify hazardous situations.

The Atlanta Police Department employs the latest technologies and strategies in fighting and preventing crime in the city. The department is developing an Integrated Predictive Policing model to enhance tracking of criminal trends and inform departmental strategy. Currently, the APD’s Crime Analysis Unit is charged with detecting crime patterns in each of Atlanta’s six zones on a week-to-week basis. These reports allow the department to make data-driven crime-fighting decisions and efficiently allocate police resources.

The overall score for public safety investment was calculated from the following:

For detailed information on crime in a specific city or neighborhood, a searchable map of crime occurrences, types, and locations can be viewed here.