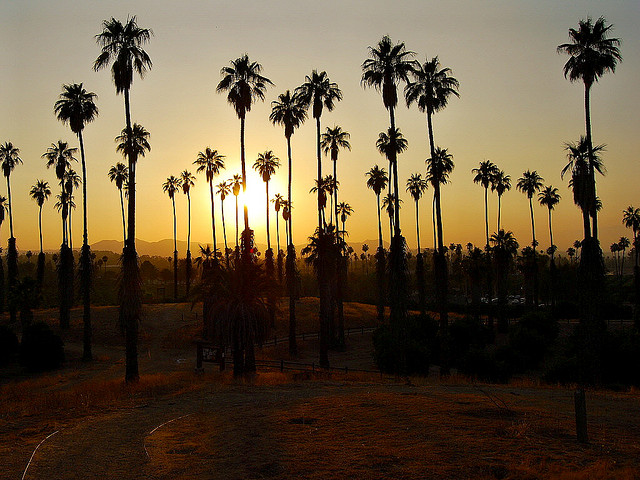 From the farm fields to the red carpet, the cities on the rise in California saw impressive gains in income, population and jobs. Even though more people left the state than moved to California in 2012, residents who stayed saw income increases of over 10% in most places on NerdWallet’s list, according to the U.S. Census Bureau.

California added 340,200 jobs from April 2013 to April 2014, which, according to the Bureau of Labor Statistics, was the second-largest job growth in the nation during that period. Even though the tech sector in the San Francisco Bay Area and Silicon Valley led the state in job creation, tourism and construction jobs are on the upswing, too, according to research by Wells Fargo Securities.

Please note: The data used to compile this study is the most recently available data from the U.S. Census Bureau. However, any recent job fluctuations because of California’s drought could not be accounted for in this analysis.

Cities on the Rise in California

Interested in moving to Beverly Hills? Here’s what you should know about its real estate market.

Reedley earned the top spot on our list for its 17.8% increase in the number of residents employed from 2009 to 2012. During that same period, the median income also rose in the San Joaquin Valley city called “the world’s fruit basket” for its shipping facilities near the state’s massive orchards. Along with a growing job market, Reedley offers local shopping in its charming downtown, farmers markets and community festivals.

Residents of this affluent island community across the bay from San Diego saw their median income rise 38.8% from 2009 to 2012, putting it high on our list of cities on the rise. San Diego County officials expect incomes to increase countywide in the coming two decades. Tourism is the major industry on the island, which has four public beaches for visitors to enjoy.

This city in the East Bay of the San Francisco Bay Area saw its population increase 44% from 2009 to 2012, and city planners expect the growth to continue. By 2020, San Ramon could potentially have nearly 74,000 residents, according to city officials. Residents here can commute to San Francisco via BART, and NerdWallet recently ranked San Ramon as the best city for job seekers in California.

The median income in San Fernando grew 23.5% between 2009 and 2012, and its population grew 2.5% over the same period. San Fernando is surrounded by Los Angeles, but it maintains its identity through historic preservation efforts for iconic homes and municipal buildings.

Population growth (13.6%) and median income growth (13.9%) earned this Central Valley city a top spot on our list. Located about halfway between Merced and Fresno, Madera is an arts-focused community with a city art gallery and a county arts council that supports local artists and resident artists in nearby schools. Manufacturing and agriculture represent large sectors in the local economy, and the Children’s Hospital of Central California also is a major employer in the city.

The median income in this wealthy haven grew 14.5% between 2009 and 2012, and population and employment also are on the upswing. Most residents work in health care or scientific services, and 15.5% said they are self-employed, according to census data. This iconic city, made famous by the celebrities who call it home, celebrated its 100th birthday this year.

Located in the sunny South Bay of the San Francisco Bay Area, Saratoga saw both employment and income increase from 2009 to 2012. This high-income community, just west of San Jose and Silicon Valley, has a small-town feel. More than three-quarters of residents work in management, business, science or art, according to census data.

This city, with roots in agriculture, saw median income increase 14.1%, and the percent of residents who are employed grow 3.4% between 2009 and 2012. The city calls itself the “citrus capital of the world” because of its expansive orange and lemon groves. Another large economic sector of the economy, tourism, gets a boost each year during the Citrus Classic Balloon Festival, a showcase of hot air balloons over Santa Paula’s citrus groves.

Residents in Gardena saw median income increase 14.5%, while the population grew 3.6%. Residents in this diverse city in the southern part of Los Angeles County work in service, sales or management and business, according to census data. It’s about a 10-mile drive from Gardena to the beach, and 15 miles to downtown Los Angeles.

This San Joaquin Valley city experienced strong population and median income growth from 2009 to 2012. The median earnings for full-time, nonseasonal employees increased 18.8%, to $39,041, from 2009 to 2012. Retail, education and health care are the most common occupations for residents, according to census data. This year marks the city’s 125th birthday.

We evaluated 325 cities, towns and census-designated places (CDPs) in California for this study.