Imagine lighting up a cigarette. Breathe in. Breathe out.

Now imagine paying $10,000 for that experience.

Gut-wrenching? Sure—but many smokers end up paying much more than that to finance their addiction. From shelling out hundreds for monthly health insurance premiums to making less money at work than nonsmoking colleagues, lighting up costs plenty. But the good news is that you can change that.

“A lot of these costs go away fairly quickly when someone quits smoking,” says Micah Berman, who researches the economic costs of tobacco at Ohio State University.

Here’s a look at how you can save if you quit smoking during this year’s Great American Smokeout, the American Cancer Society’s annual day-long campaign to encourage smokers to drop the habit:

Planning to move or trade in your car sometime soon? Kicking your smoking habit could help you make thousands more from these sales.

No one wants to buy a car that smells like an ashtray. The same goes for your house, your clothes and your furniture. If you have plans to sell any property and no amount of Febreze seems to kill the odor, you might end up getting a raw deal.

A San Diego State University study found that smokers who sell their cars make 7% to 9% less than nonsmokers. In a 2013 study commissioned by Pfizer Canada and reported by the Chicago Tribune, 88% of real estate agents surveyed said houses belonging to smokers were more difficult to sell. One-third also estimated that having a regular smoker in the home could reduce resale value by 20% to 29%.

Smoking breaks cost employers about $3,077 per employee per year in lost wages, according to the 2013 Ohio State University paper “Estimating the cost of a smoking employee,” coauthored by Berman. Taking several smoking breaks a day can be a productivity killer, says 32-year-old ex-smoker Jesse Gaddis, who started the e-cigarette company Bedford Slims after quitting.

After a smoking break, “you don’t just go right back to your task,” says Gaddis, who lives in Brooklyn, New York. “You ease back into it.” This adds up over the day, he notes.

Smoking employees with a range of different incomes earn an average of 17.5% less than non-smokers, according to a 2013 study by the Federal Reserve of Atlanta. The study, which controlled for variables such as education levels, determined that even smoking just one cigarette a day could affect an employee’s earning potential.

After smoking for over 20 years, Nancy Irwin of Los Angeles, California, had to pay more than $10,000 for dental surgery. It’s an experience she won’t soon forget. “I just remember feeling ashamed,” she says, noting that she couldn’t eat anything for days afterwards. The gum disease, caused by smoking, was completely preventable.

Currently, 16 million people suffer from smoking-caused illnesses, according to the Campaign for Tobacco-Free Kids. In 2012, smoking cost those consumers an average of 14% more in health insurance, according to an eHealth study. But in 2015, Affordable Care Act policies will start charging smokers up to 50% more in monthly premiums. For those trying to lower their medical bills, quitting smoking is a great place to start.

When you factor in increased life insurance and homeowners insurance costs, as well as the price of cigarettes, you realize smoking can easily set you back upwards of $10,000 a year—and that doesn’t take unexpected medical events into consideration.

“It doesn’t just affect you,” says Gaddis of the costs associated with smoking. “It affects everyone around you.”

Call the National Cancer Institute’s toll-free hotline and get advice from a counselor. Ask your doctor about tobacco-cessation programs in your area and check out the Center for Disease Control and Prevention’s resource page for more ideas.

Quitting is hard. But instead of thinking about the daily routine you’re missing out on, just think about how much you could replace that with, suggests Irwin, who returned to graduate school to earn her Doctor of Psychology degree after leaving her smoking habit behind.

“It’s such a sweet freedom when you’re off those stupid things,” she says. 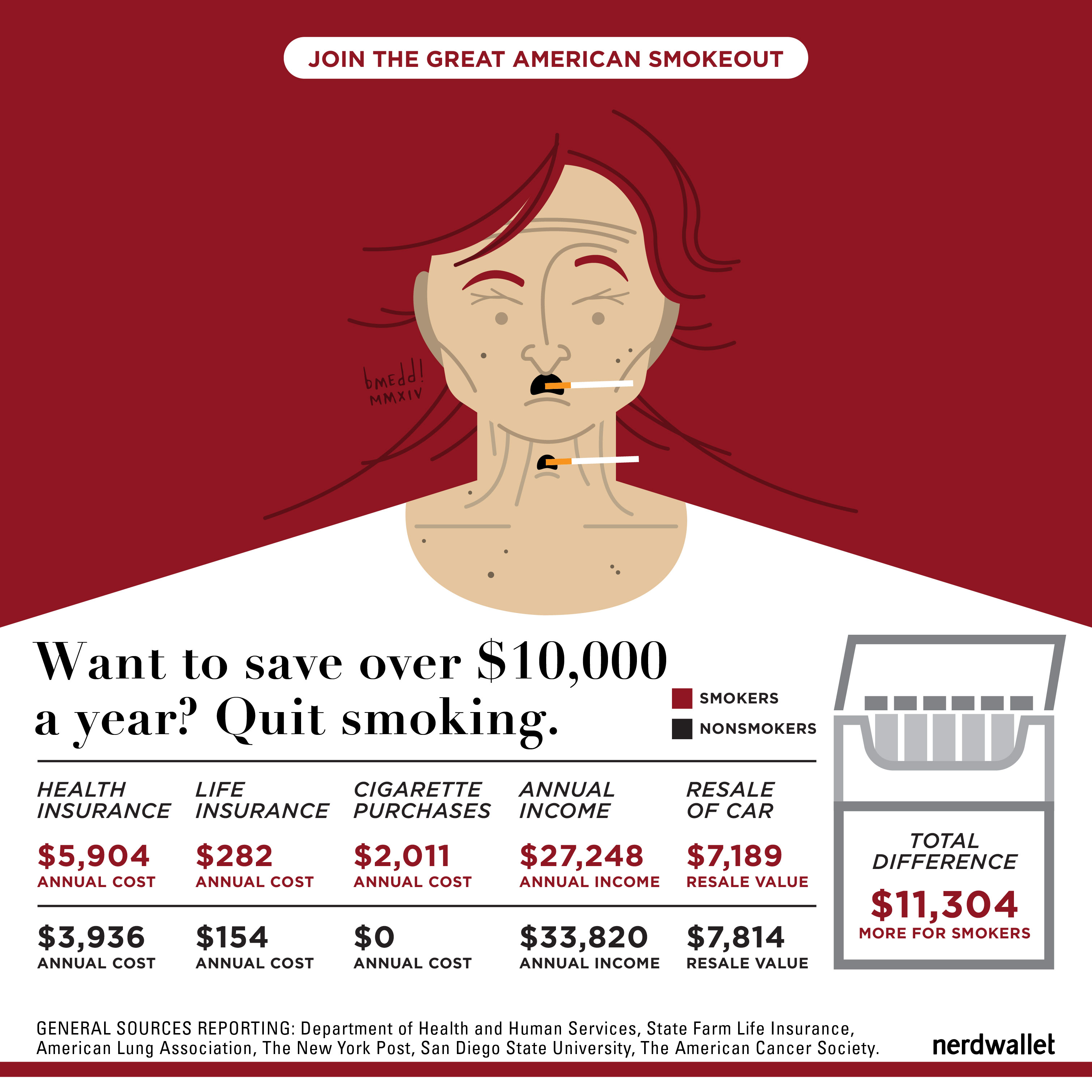 According to the Department of Health and Human Services data, a mid-tier health plan under the Affordable Care Act costs an average of $328 per month, reports NBC. In 2015, the ACA will begin charging smokers up to 50% more.

The average cost of a pack of cigarettes in the U.S. is $5.51 per day, according to the American Lung Association. Some states, like New York, have even higher tobacco taxes, making the addiction even more costly.