Though home repairs are an inevitable cost of being your own landlord, NerdWallet’s analysis found that homeowners who DIY projects large and small may keep costs from going through the roof.

Keeping up with home repairs and improvements can be expensive, time-consuming and a real exercise in stress management, whether you do it yourself or hire a pro. But most homeowners know — or soon discover — that such projects are part of the deal when you trade rent for a mortgage payment.

Whether they’re referring to the money they put into the house or the money they hope to one day get out of it, 85% of U.S. homeowners say their home is their biggest investment, according to a new NerdWallet survey of 2,001 U.S. adults, 1,353 of whom are homeowners, conducted online by The Harris Poll. And they’re definitely putting money into it: Nearly $450 billion went to improving American homes between 2015 and 2017, according to U.S. Census Bureau data from the American Housing Survey.

“Typically, renovations happen just before or just after a home is sold,” explains NerdWallet home expert Holden Lewis. Now, a shortage of affordable homes and higher mortgage rates mean people are staying in their current homes longer. “Mortgage rates have been rising for two years and lots of homeowners are locked into low rates they don’t want to give up by selling their current home, so they’re fixing up instead of moving up. This, paired with first-time homeowners buying homes in need of renovations — because that’s what’s available — seems to be driving a lot of home improvement spending.”

Mortgage rates have been rising for two years and lots of homeowners are locked into low rates they don’t want to give up by selling their current home, so they’re fixing up instead of moving up. This, paired with first-time homeowners buying homes in need of renovations — because that’s what’s available — seems to be driving a lot of home improvement spending.

Many American homeowners are:

Americans worked on 113 million home improvement projects from 2015 through 2017, spending $449.5 billion, according to recently released data from the 2017 American Housing Survey, conducted by the U.S. Census. These projects included unexpected repairs such as roof leaks and busted pipes, and upgrades like new security system installations and kitchen renovations.

While some of these projects were, no doubt, planned, others likely came as a surprise. Of Americans who have ever purchased a home, 44% say they experienced their first unexpected home repair on their most recently purchased home within the first year of ownership; 12% experienced that surprise repair in the first month, according to NerdWallet’s survey.

“Unexpected home repair costs can be a nightmare, especially for first-time home buyers,” Lewis says. Buying a house is expensive, given closing costs, moving and the stuff you fill your new home with. “On top of all those expenses, you’re expected to keep some savings in reserve for emergency repairs. Don’t kick yourself if you don’t have an emergency fund left over after you buy your house. But you’ll be a less anxious homeowner if you make it a priority to build up that fund.”

Nearly half (48%) of all American homeowners say unexpected home repair costs have caused them anxiety, according to NerdWallet’s 2018 Pulse on Homeownership, published earlier this year. That anxiety is understandable given that 31% of homeowners do not have money set aside for home repairs and improvements, according to this latest survey. Simply not having the money set aside could be why 5% of homeowners would wait for a necessary home repair to cause damage before getting it fixed. Six in 10 (60%) say they would get such a repair done “right away.”

Saving by doing it yourself (DIY)

Costs, pop culture and perhaps overconfidence could be driving DIY culture. Eight in 10 (80%) homeowners say professionals charge too much for labor and materials, according to the current survey. And 73% say there is a wide variety of resources available to them that contain enough information that they could do every single one of their home repair and improvement projects themselves, if they wanted to.

DIY projects account for 38% of all home improvement projects, but only 18% of home improvement spending ($81.6 billion), according to census data. Landscaping and bedroom renovations are some of the projects homeowners were most likely to DIY compared with hiring a professional, while roof repair or replacement was the project they were least likely to tackle on their own. And there are substantial differences in project spending for DIY projects.

Comparing median expenses for a DIY kitchen renovation, for example, homeowners who wielded the tools themselves typically spent $22,000 less than those who employed a professional, according to NerdWallet analysis of the census data. See the second tab of the chart below for more savings data.

But improving your home on your own comes with risks: 43% of homeowners say they’ve messed up a DIY home project on at least one occasion, and 35% say a home improvement show influenced them to take on a DIY project that ended badly.

“Have some humility when you think about tackling repairs and renovations yourself,” says Lewis, who had to pay for a previous owner’s DIY screw-up when he purchased his current home. “If it’s a job you’ve never done before, and it’s hard to undo, think really hard whether you should do it yourself, even with the guidance of YouTube.”

Most homeowners draw the line at serious repairs — 78% say they’d be more likely to try small projects themselves than hire a pro, and just 40% say the same about more complex home improvements such as plumbing and electricity. Furthermore, despite their belief that pros charge too much, 68% of homeowners say the cost of hiring a professional for home improvements is worth it over having to do it themselves.

» MORE: 4 Questions to ask before you DIY

Have some humility when you think about tackling repairs and renovations yourself. If it’s a job you’ve never done before, and it’s hard to undo, think really hard whether you should do it yourself, even with the guidance of YouTube.

Younger homeowners picking up the hammer

Homeowners age 34 and younger opt to DIY more often than hire a professional, and their home improvement spending reflects that — median project expenditures among these younger homeowners are the lowest, according to census data.

But younger homeowners are also more likely to run into problems they didn’t expect, which may force them into self-service home repairs — 60% of millennials (age 22-37) who have ever purchased a home say they ran into their first unexpected home repair on their most recently purchased home within the first year after closing, according to the survey, compared with 47% of Generation X, 29% of baby boomers and 26% of the silent generation.

Roughly half (52%) of homeowners who have done a home repair or improvement project over the past two years were easily able to pay for the majority of them, according to the newest NerdWallet survey. As for the others — sacrifices were made, debt was amassed and savings were spent. 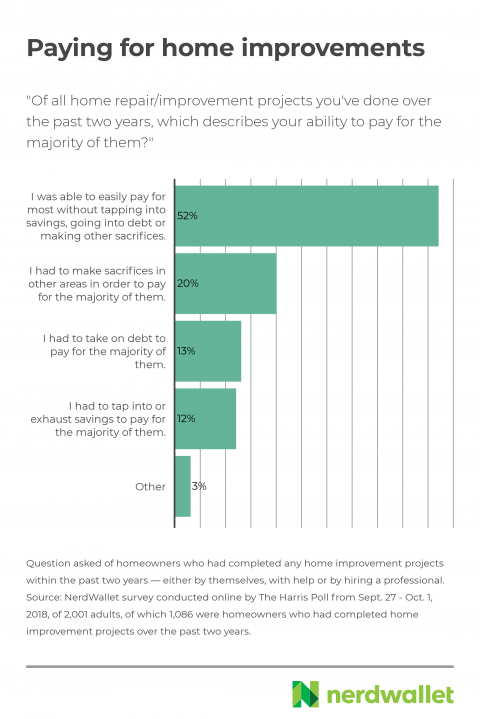 Homeowners are willing to borrow money to invest in their home’s value; 56% said they’d be willing to borrow money, for example from a lender or family member, to do home repairs or improvements that they knew would increase the value of their home. However, they may not always be aware of which projects fall into that category, as 72% said spending money to improve a home always increases the value.

“When paying for home renovations or repairs, I recommend finding the money to pay for it anywhere but your retirement fund, if possible,” Lewis says. “If you have enough equity to get a home equity loan or line of credit, those are fantastic ways to pay to fix up your home, while leaving your retirement intact.”

For homeowners facing repair work or dreaming up lofty home improvements, properly estimating the costs in advance can make execution far less stressful. The calculator below is a good place to start, and includes median costs for popular home improvement projects, whether you’re interested in hiring a professional or doing it all yourself.

Of course, costs vary by project specifics and location, so be certain to call around for several estimates if you plan to enlist the help of a contractor.

» MORE: See how home improvement costs stack up across 15 of the largest metro areas

This survey was conducted online within the United States by The Harris Poll on behalf of NerdWallet from September 27 – October 1, 2018, among 2,001 U.S. adults ages 18 and older, 1,353 of whom are homeowners. This online survey is not based on a probability sample and therefore no estimate of theoretical sampling error can be calculated. For complete survey methodology, including weighting variables and subgroup sample sizes, please contact Maitri Jani at [email protected].

NerdWallet defines generations in the following manner: post-millennials, ages 18-21; millennials, ages 22-37; Generation X, ages 38-53; baby boomers, ages 54-72; silent generation, ages 73-90. When a generation is not listed in results, it’s due to a small reporting base and cannot be considered a representative sample.

The American Housing Survey is released every two years. For the latest release, interviews took place between June and October 2017 and homeowners were asked about the home improvement projects on their home done “in the past two years.” Respondents could have interpreted that to mean since January 2015, or since mid-2015.

The AHS asks homeowners to self-report what they spent on projects in a variety of categories. Beyond defining what constitutes a remodel versus a renovation (as seen below), the survey does not break out projects by scale, scope, quality of materials or finish.

AHS data used in this report is specific to owner-occupied households.

The AHS measures project expenditures. For the purposes of this analysis, project “costs” and “expenditures” are used interchangeably.

It defines remodeling as “a job that made substantial changes to the room. This might include changing the layout of a room, but not tearing down or adding walls.” It excludes “decorating work” such as painting and furnishing.

The AHS defines room additions and renovation as major projects that “altered the room by changing its structure,” including adding or removing walls.