Just as every marriage proposal is meant to feel unique, so too is every ring.

What’s not unique is the pressure that comes with picking the perfect rock for your significant other. You’re not alone — many others have navigated the potentially treacherous waters of ring shopping.

To help you out, we talked to three couples who recently went through the ring-buying process. Here are their stories — and their shiniest pieces of advice. 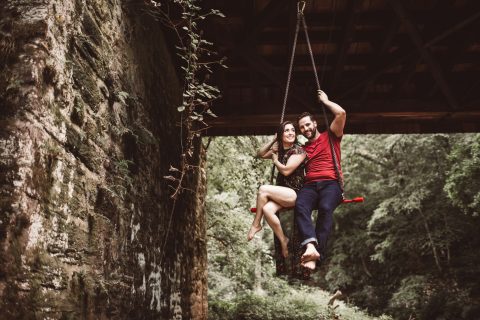 John Olszewski never saw himself as the marrying type. That changed when he met Cassie Grob.

“I never really thought I wanted to get married,” John says. “I was always happy being a bachelor. … Cassie was the one girl who made me change my mind.”

John, 33, of Philadelphia, works in trucking logistics. His bride-to-be is a 29-year-old Seattle native who works in public relations. After being introduced by mutual friends, the two hit it off.

A few years later, John found himself down on one knee in a memorable outdoor proposal in front of Cassie’s parents. But before he popped the question, he had to buy the ring.

Find out what she likes 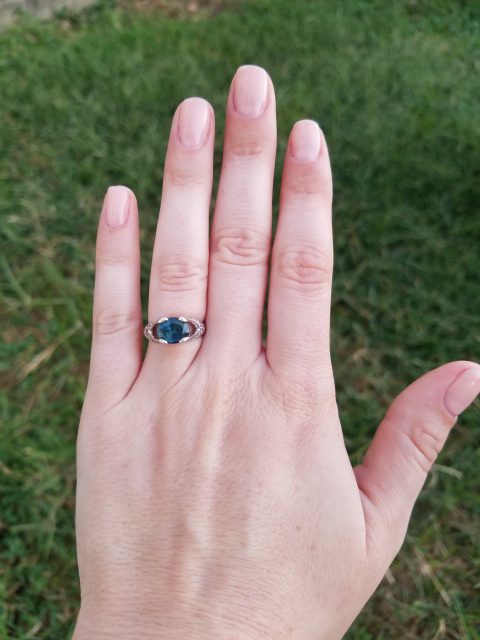 John used his cyber-sleuthing skills to gather intel on what Cassie wanted in an engagement ring.

“I did a lot of research,” he says. “One thing I wanted to do was very subtly see what she likes. A very helpful thing was her Pinterest board. I went through there to see whatever she was pinning just to try to get an idea of what type of stone shape she likes.”

And whenever an engagement announcement would come across his social media feed, John casually asked her what she thought of the rock. That’s how he knew she wanted something she wouldn’t see on anyone else.

Finally, after consulting with Cassie about the stone, he chose an oval blue sapphire surrounded by diamonds and set in white gold.

“Some people, I think, are surprised that you’re showing them something that’s not a diamond, and other people kind of relate to it and like seeing that it’s not the typical diamond engagement ring,” Cassie says.

Cassie didn’t randomly pick a colorful stone. Before she told John she wanted a sapphire, she talked to jewelers to find out which precious stones could withstand daily wear and which weren’t up to the job.

When it came time for the big purchase, John went to a local jeweler and collaborated with the owner to design a ring that was unique to his bride and fit within his budget.

In John’s case, the jeweler was more of an artist than a salesperson. “I would probably recommend working with a local guy — someone who’s gonna take pride in his work,” he says.

Cassie and John will tie the knot in September 2017. 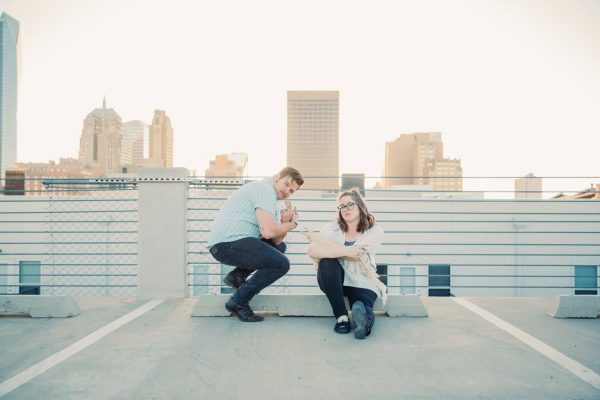 Kayla Sheehan and Baker Pitts of Oklahoma got engaged in March 2016 and married that October, after their ring-buying experience ended with a twist.

Kayla, 25, bought her engagement ring without even knowing it.

When Baker, 26, purchased a ring online from Esty, the checkout process went smoother than expected. He soon realized why — he had missed a step, forgetting to log out of his future wife’s account and log into his own.

“A couple minutes later I sat up and I was like, ‘It never asked me to sign in,’” Baker says. “I realized that I had just made her buy her own engagement ring.”

The subsequent confirmation and cancellation emails might’ve tipped Kayla off to which ring Baker chose, but he managed to still make his rooftop proposal a surprise. 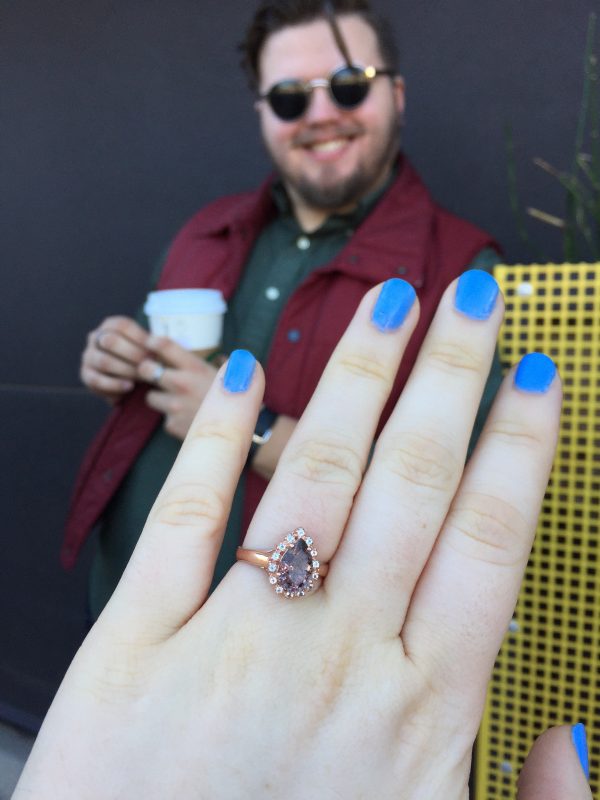 Months before they got engaged, Kayla says she and Baker sat down to talk about money. At the time, Kayla, who now works at a local news station, and Baker, who is a social media manager, were fresh out of college.

“We sat down in January and were like, ‘OK, what do we want to accomplish this year?’” Kayla says. The couple set a time frame for when they wanted to get engaged and married. They used this, in combination with their salaries at the time, to set a baseline budget.

While some couples may prefer to make an engagement a complete surprise, Kayla and Baker made the conscious decision to talk about what they each wanted and could afford. “We’re real aware of the fact that neither of us are mind readers,” Kayla says.

You don’t have to spend thousands

The ring Baker settled on cost around $200, which came in under their budget. It’s also considerably less than the average spent on an engagement ring — $5,000 — according to WeddingWire’s 2017 Newlywed Report.

Kayla’s ring consists of a pear-shaped lepidocrocite stone (which has a purple hue) surrounded by a halo of white sapphires. 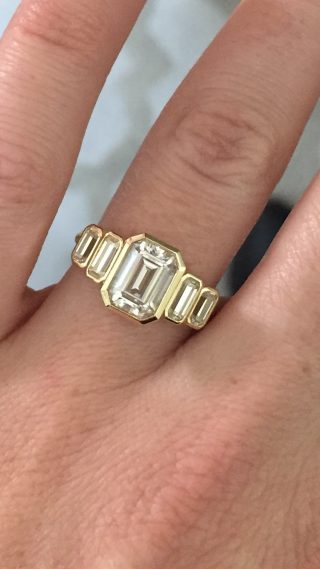 In April 2017, Taylor Coil came home to an apartment full of flowers and her now-fiance, Jeff Farris, down on one knee. The ring he proposed with? A collection of moissanite stones set in a yellow gold band.

It wasn’t the first time Taylor saw the ring she now wears on her left hand; she and Jeff designed it together with the help of a jeweler they found online.

Think beyond the ring

Early in their relationship, Taylor, a 27-year-old from North Carolina who works in marketing, and Jeff, a 28-year-old web developer, traveled abroad together. The couple eventually settled in New York.

Just before their engagement, Jeff received a substantial bonus at work. He and Taylor decided to put some of the bonus toward an engagement ring. While the couple could have thrown the full bonus at an over-the-top ring, they opted to only use a fraction of the money.

She and Jeff did a “gut check” to decide what would be a reasonable amount to spend on a ring. That meant not only how much they could afford, but also how much they were comfortable spending in light of other financial goals.

“My ring would be probably a $20,000 ring if it were diamond, which we were originally looking at doing because we could pay for it outright,” Taylor says. “But we also wouldn’t be able to take this massive trip we’re doing in two weeks to Sweden and Norway.” 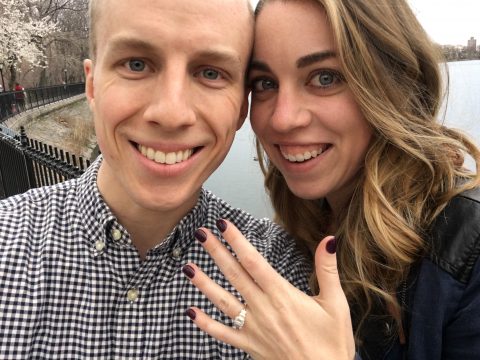 Taylor knew she wanted a yellow gold setting and a clear stone, so she took time to learn about her options.

She also made sure to consider only reputable sellers, zeroing in on the depth and specificity of information they provided. The seller she settled on was familiar with the history of moissanite and provided in-depth explanations of the various cuts and shapes of the stone.

After several months of collaboration with the ring maker — including having a wax rendering of the ring created before the real thing to see how it would look while being worn — she ended up with a piece that she says combines her own taste with her future husband’s, and she couldn’t be more pleased.