Everybody knows accidents happen, but in the eyes of the law (and insurance companies), there’s almost always someone to blame.

If you or your family are responsible for accidental damages to someone else — either property damage or injuries — that person may be able to make a liability claim against you and your insurance. Liability insurance claims can fall under your auto, homeowners or renters, and umbrella insurance, depending on the accident.

Liability insurance is only for damages to someone else — meaning you’re “liable.” It doesn’t pay for your own family’s injuries or damage to your own belongings, and it doesn’t cover intentional injury or damage.

The blame in liability cases is not always clear-cut, and who’s at fault may be disputed. If an insurer denies a liability claim, or an injured person thinks the payout is insufficient, they can hire an attorney and take the case to court.

Here are some common scenarios and who’s likely to blame. 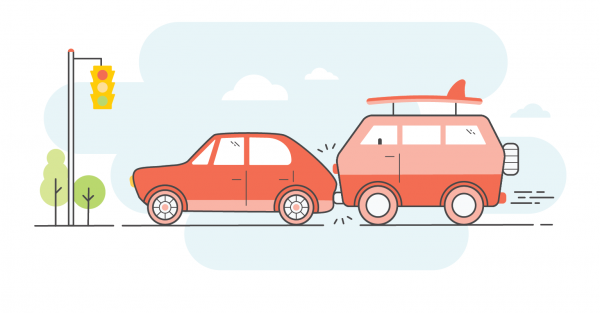 The situation: Jim is driving home in heavy traffic when he’s suddenly cut off by another driver. A second later, the driver slams on the brakes and Jim just doesn’t have time to stop, so he rear-ends the car and damages the back.

Who’s liable: Even if the other driver was being a jerk, Jim is likely liable for the accident because he failed to maintain a safe driving distance. The other driver can make a claim against Jim’s car insurance to pay for damage to her car.

In some states blame can be split if both drivers share fault. For example, if the other driver’s brake lights were out and Jim couldn’t tell she was stopping, she could be found partially responsible in some states.

Another route: The other driver can make a claim for her car damage on her own collision insurance, if she has it.

2. Food poisoning at a barbecue

The situation: The Jacksons decide to throw a backyard barbecue, and Uncle Joe calls a few days later to report he spent the next day in the hospital with food poisoning. Joe blames the potato salad, saying it sat in the sun too long. Nobody else has complained of illness to the Jacksons, who think it was just an unfortunate coincidence.

Who’s liable: It’s hard to say whether the Jacksons caused the illness through negligence, but Uncle Joe can still file a claim with their home insurance company.

“If someone’s coming at you, injured and looking for money, the first thing you should do is look at your insurance coverage,” says Bob Passmore, assistant vice president at the Property Casualty Insurance Association of America.

Home insurance and renters policies typically include medical payments coverage that will pay for medical bills up to a certain dollar amount. Some policies offer only $1,000 in medical payments, but you can usually buy more. Typically, no one has to determine fault or negligence for this coverage to pay out, Passmore says. If medical bills are higher, a claim could be made against your homeowners liability insurance, for which negligence has to be shown.

Another route: Uncle Joe can use his own health insurance for his medical bills. 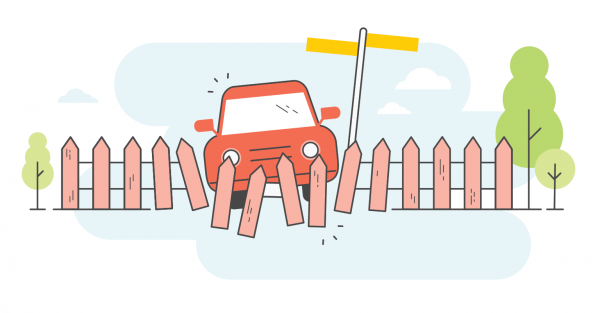 The situation: The Novaks host a family holiday get-together. Aunt Charlene has too many glasses of wine before she gets behind the wheel, and she causes a crash on the way home. She goes through someone’s fence and hits their patio furniture.

Aunt Charlene has property damage liability insurance in her auto policy, as required by her state, but her limits are so low that her policy won’t cover all the damage. The fence owner says that because the Novaks served the alcohol, they’re liable for the costs to fix all the damages. The Novaks think that’s on Charlene, who should have known she was too drunk to drive.

Who’s liable: This one depends on where the Novaks live. They are probably not liable for the costs beyond what Charlene’s car insurance will cover, says attorney Joseph Matthews, author of Nolo’s “How to Win Your Personal Injury Claim.”

Some states have “social host” laws that can hold someone accountable if they provide alcohol to a guest in their home who then gets into a car accident, Matthews says. However, many of these laws focus on alcohol served to minors, he says.

Aunt Charlene isn’t a minor, so the Jacksons are only liable for the damage if they live in a state with social host laws that apply to adult guests. In that case, the fence owner would likely have to prove Charlene was clearly drunk at the party and one of the Novaks knew she would be driving, Matthews says.

Another route: The fence owner can make a claim on their own homeowners insurance. 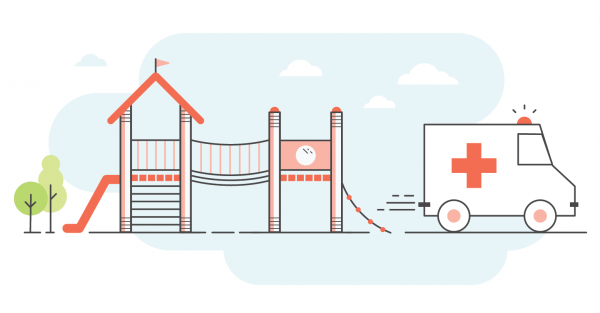 The situation: Some elementary-school-age children are playing at their neighborhood park when little Suzie Smith pushes Johnny Jones at the top of the playground set. Johnny falls off, injuring his head on the way down, and must go to the ER. Johnny’s mother calls an ambulance, then threatens Suzie’s parents with a lawsuit.

Who’s liable: Since Suzie is a child, her parents are liable for Johnny’s injury. Medical payments coverage, part of their homeowners insurance, can pay out up to a small amount no matter who’s at fault — typically $1,000 with the option to buy more.

But if Johnny’s seriously injured, the Smiths’ medical payments coverage through their homeowners insurance may not be enough. Rather than sue, the Joneses can file a claim against the Smiths’ homeowners liability insurance. On top of reimbursement for medical bills, they may also receive compensation for Johnny’s pain and suffering.

Another route: The Jones family can use their health insurance for Johnny’s medical bills, but it won’t pay for pain and suffering.

5. Her tree falls on his roof

The situation: A nasty windstorm causes a large tree in Jane’s yard to fall on her neighbor Ed’s roof. Ed and Jane agree that it really is a lot of damage, but disagree about whose insurance should pay. Ed thinks that since it’s Jane’s tree, she’s at fault and her homeowners insurance should pay for the damage.

Who’s liable: Ed’s homeowners insurance likely covers the damage, even though someone else owned the tree, Passmore says. Ed’s home insurance would pay for the damage because nobody was negligent or careless in this case.

There may be an exception if something was wrong with the tree, such as rot, and Jane knew about it but did nothing. In that case, Ed would have to prove that Jane knew about the rot and was negligent by ignoring it — a difficult case to make, Passmore says. 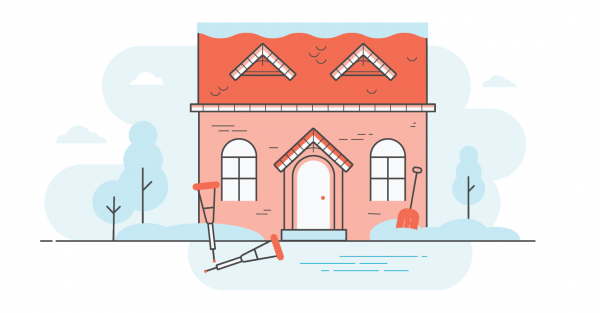 The situation: It’s been a cold and icy winter, but Sally’s neighborhood is starting to thaw and she goes for a walk.

On the sidewalk in front of the neighboring Henderson home, Sally loses her footing on a sheet of ice and fractures her wrist trying to break her fall. When she approaches the Hendersons about her fall, they say they did what they could, but there was just no way they could have prevented ice from forming in that particular spot.

Who’s liable: Who is at fault depends on where the accident took place, Matthews says. In some areas, the city or county has a legal duty to keep sidewalks in a safe condition, including snow and ice removal, he says.

But in many places it is the responsibility of property owners to keep the sidewalk clear and safe. If that’s the case in their neighborhood, Sally can file a claim against the Hendersons’ homeowners insurance, Matthews says.

Property owners can only do so much to clear walks, and Sally should know that one thing that happens in winter is that ice forms on sidewalks, Matthews says. Her claim could be reduced or denied if she were in any way careless, if she knew the ice was there or if the Hendersons took reasonable steps to keep the walk clear.

Another route: Sally can use her health insurance for her medical bills.

The situation: Leonard, who rents an apartment, decides to take his dog to the park to let her burn off some energy. As he’s playing with her off leash, she’s distracted by a Frisbee across the road and runs toward it. Suddenly a car comes racing down the road and hits the dog. The driver stops, gets out and says he’s sorry about the dog. Then he notes the considerable damage to his car, saying Leonard should have to pay.

Who’s liable: “One of the foreseeable consequences of letting a dog off leash is that it might run into the road,” Matthews says. Therefore, Leonard is most likely liable for the damage to the car, and the driver can file a claim against Leonard’s renters insurance. This is especially true if he lives in an area with laws requiring dogs to be on leashes.

Another route: The driver can file a claim on his own collision insurance, if he has it.

The situation: While walking through his neighborhood, Arnold sees a dog rushing at him, snarling and barking. Startled, Arnold falls back and sprains his ankle. The dog never reaches Arnold because the owner, Jen, has installed an invisible electronic fence to keep the dog on her property. Jen thinks she’s not to blame because Arnold and the dog never made contact.

If that is not sufficient, Arnold will have to prove Jen was negligent. In any liability claim, “you’re going to have to show that there was something the owner should have done that would have prevented your injury from occurring,” Passmore says.

Another route: Arnold can use his own health insurance for his medical bills.

If you’ve been injured or your property was damaged and you think someone else is to blame, the first step is talking to them, Passmore says. Discuss what happened and ask about their insurance.

Follow these steps to initiate a claim against them:

Ask for their insurance company’s name, the full name of the person who owns the policy and their policy number. You can write a letter directly to the insurance company to notify them that you’ll be a pursuing a claim.

If you didn’t get the name of the insurer, or the person responsible won’t give you the name, send them a letter by certified mail that notifies them that you’re seeking compensation for the incident. They have a duty to notify their insurer, and if they don’t they could lose their coverage.

Snap some photos of injuries or visible damage with a time and date stamp.

Expect a call from an insurance adjuster or investigator, who must determine if your injury or damage was caused by negligence. They’ll want to talk to you, the insured person and any witnesses, and see any photos you took or medical records of your injury.

Typically, you can determine who was at fault by asking some basic questions, Matthews says:

If someone wants to file a claim against your insurance, contact your insurer immediately, Passmore says. Let your insurer or agent know what happened from your point of view, and tell them to expect a claim.