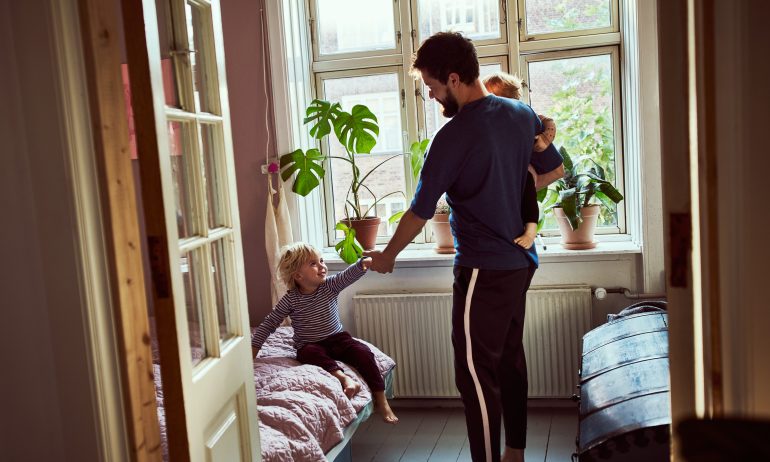 It’s one thing to dream about living in completely new surroundings; it’s another (sometimes costly endeavor) to pack up and move.

About one-fourth (26%) of Americans would prefer to live in a different location type — be it a city, suburb, small town or rural area — and many cite financial reasons as primary obstacles to getting there, according to a NerdWallet survey of over 2,000 U.S. adults conducted online from July 30 to Aug. 1, 2019, by The Harris Poll.

“When it comes to where we live, some are cursed with more options than opportunities — it’s not as simple as packing up and going,” says NerdWallet mortgages expert Holden Lewis. “We long to leave our sleepy suburbs for the exciting city, or we dream of ditching the city for a quiet small town. But moving is expensive — you have your job and a new cost of living to think of, and you’re often leaving friends and family behind.”

Note: Throughout this report, references to living location, surroundings or area refer to the four location types in the survey — city or metro area, suburb, small town and rural area.

To uncover Americans’ sentiments, the survey didn’t define location types and instead asked respondents where they lived versus where they would like to live based on what they think is a city, suburb, small town or rural area.

» MORE: How does the cost of living compare in your ideal location?

Some people live where they were born and raised. Others may have relocated for college, a job, a relationship or personal preference. Our survey found that Americans are most likely to report living in suburbs. 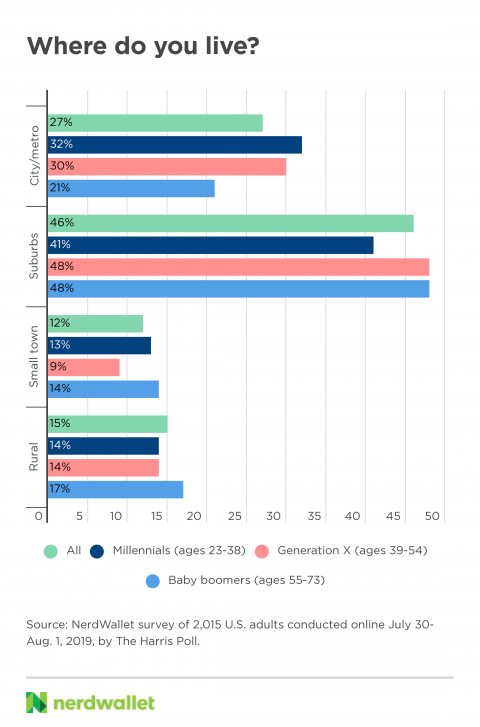 For additional survey data, including why people choose these locations, contact Thomas McLean at [email protected]

But where you currently live isn’t necessarily where you want to live. Over one-fourth (26%) of Americans say they aren’t living in their ideal location type. Small-town Americans are most likely to be unsatisfied with their location — 44% of people in small towns don’t want to live there, compared with 30% of rural residents, 23% living in cities and 21% of suburbanites. 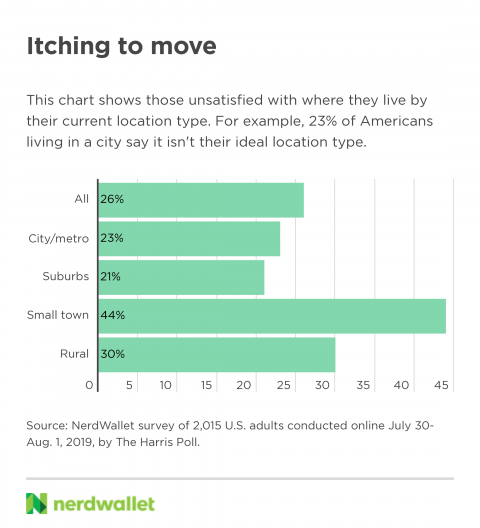 Of the generations surveyed about their current locations, millennials (ages 23-38) living in small towns or rural settings are most likely to be unsatisfied — about half (49%) say they’re not living in their ideal location, compared with 30% of Gen X (ages 39-54) and 26% of baby boomers (ages 55-73) who live in those areas.

Affordability is a top barrier to moving

Moving is expensive, and moving to an entirely new neighborhood, let alone a new location type, can change how much you’re spending on housing, commuting and even groceries.

When asked what’s holding them back, 45% of Americans not currently living in their ideal location say they can’t afford homes in their preferred area. As well, 1 in 5 (20%) say they have too much debt to be able to afford the move and still have enough for rent or mortgage payments.

“The places with the most jobs — cities — also have the most expensive housing,” Lewis says. “On the other hand, incomes are higher, too. Still, even if you find a higher-paying job to make the housing costs manageable, relocation costs are daunting.”

» MORE: This step could save you thousands on your next house

Homes in cities are particularly out of reach

Those who would rather live in a city instead of their current location are most likely to cite the affordability of homes they prefer as a blocker — 62% say they can’t afford homes they like in a city (compared with 41% of those who would rather live in the suburbs, 36% of small-town hopefuls and 45% of those with their sights on a rural location). [1]

In 2019, close to half of the biggest 25 metros — which include a main city and some outlying suburbs — have home prices at least five times the estimated median income, according to NerdWallet’s analysis. In the San Francisco metro area, with the highest home-price-to-income ratio, homes are selling for over 10 times the median income.

Most would make sacrifices to move

Nearly 7 in 10 (69%) of those not living where they would prefer would take action to move to their ideal location, the survey found. 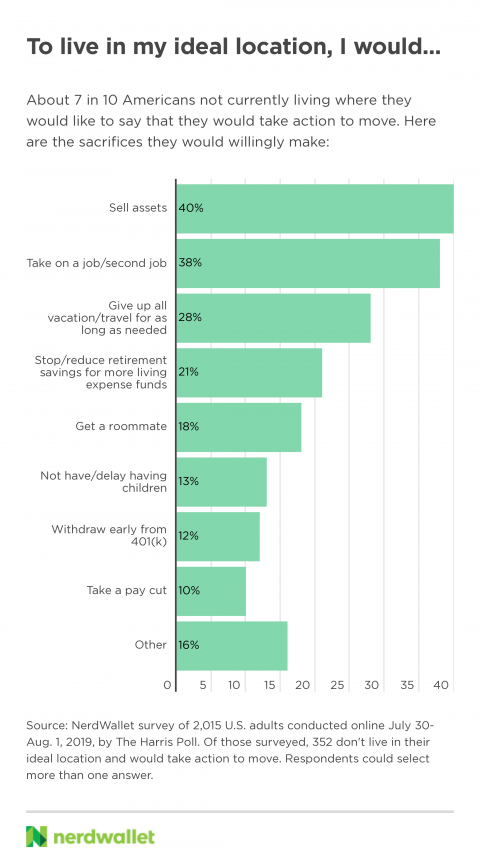 “Moving forces you to change the way you save and spend,” Lewis says. “That goes double if you’re buying a home in the new place. If relocating is a top priority, you might have to sell a car, take a part-time job or cut your spending. But these sacrifices may be totally worth it if you end up in your dream surroundings.”

One sacrifice renters may be willing to make to move to their ideal location: homeownership.

Homeowners, on the other hand, aren’t willing to make the switch to renting. More than three-fourths (78%) of homeowners not living in their ideal location say they would rather stay put and continue owning than move and become a renter.

“Once you’ve owned your home, it is difficult to give that up,” Lewis says. “Homeownership is still part of the American dream for many, so selling your home and becoming a renter can feel like downward mobility — even when renting is the better option. I recommend silencing that internal voice and doing what’s best for you.”

The survey of U.S. adults ages 18 and older was conducted online July 30-Aug. 1, 2019, by The Harris Poll. Of the 2,015 in the survey, 512 don’t currently live in the location type where they want to be at this time in their life. This online survey isn’t based on a probability sample and therefore no estimate of theoretical sampling error can be calculated. For complete survey methodology, including weighting variables and subgroup sample sizes, contact Thomas McLean at [email protected]

Throughout the report, living location and location type refer to the place a home is in, as characterized by each respondent — a city/metro area, suburb, small town or rural area.

For metropolitan area affordability ratios, we analyzed 2017 median incomes from the U.S. Census Bureau’s American Community Survey one-year estimates adjusted to Q2 2019 using the Employment Cost Index of the Bureau of Labor Statistics, and Q2 2019 single-family home prices from the National Association of Realtors for the 25 most populous metro areas, excluding Detroit due to a lack of available data.

[1] Caution, low base size (n=97) – data should be interpreted as qualitative and directional in nature.