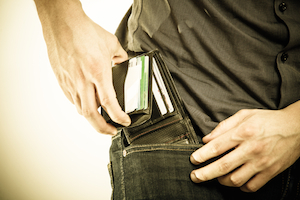 Let’s face it: Retail data breaches have left a lot of us worried about credit card security. As a result, card issuers and networks are stepping up measures to prevent theft and fraud.

For instance, Visa recently introduced a system known as Visa Transaction Advisor to help detect credit card theft at gas stations. Wondering how it works? Take a look at the details below.

Why are gas pumps a target for thieves and fraudsters?

Historically, the pump has been a magnet for credit card crooks. In fact, if you’ve ever been the victim of credit card theft, the first fraudulent purchase made with your purloined card may have happened at a gas station.

There are two primary reasons for this. For one thing, popping into a gas station and pumping a few gallons is a simple way for criminals to see if your credit card is valid. Assuming the transaction goes smoothly, they’ll feel confident about moving on to other retailers.

But also, gas pumps are usually unattended. This makes them an easy mark for villains. A thief can roll in, fill up his or her tank with a stolen card, and roll out without much notice.

The major credit card networks have long recognized that gas stations are an easy target for thieves, and now Visa is taking steps to address this problem.

With Visa Transaction Advisor, unattended card terminals at the pump can do a quick check to judge the likelihood that you, the legitimate cardholder, are completing the transaction before it’s allowed to proceed. This is accomplished by software that analyzes nearly 500 pieces of information, including location, other purchases you’ve recently made and whether your card has been involved in breach. The data analysis happens as soon as you dip your card and is completed in about one second.

The software then produces a score between 0 and 99. The lower the score, the more likely the purchase is authentic. According to an article in The Washington Post:

“Each gas station gets to set a risk threshold, say 50 on that zero-to-99 scale. If your card generates a risk score that exceeds the threshold, a message will flash at the pump for you to see the attendant inside the station.”

Obviously, a crook isn’t going to risk getting caught by a gas station employee. He’ll probably just hit the road. This is what’s supposed to happen – the fraudulent transaction was essentially over before it started.

So far, Visa Transaction Advisor seems to be effective. According to the Post, which reported on the new software in August 2014:

“Roughly 25,000 gas stations have already signed on, with Chevron, an early test case, reporting a 23 percent drop in fraud at the pump.”

Other ways to protect yourself from credit card theft and fraud

Systems like Visa Transaction Advisor are a great step toward helping stop credit card criminals in their tracks. But it’s unlikely that they’ll be used en masse by merchants for some time to come. In the meantime, there are steps you can take to protect yourself from credit card theft and fraud:

The takeaway: Visa Transaction Advisor is helping stop credit card thieves at the pump. But remember, you are also empowered to prevent theft and fraud — be sure to also take precautions to keep your card information safe.