A "housing crash" and a "housing correction" differ in how they’re caused, and the severity of their effect on home prices and sales.

When Canada’s housing market moves so fast it leaves expert projections and home buying budgets in the dust, it can feel almost dangerous, as if all that’s needed to send it flying into a ravine is a single bump in the road.

Between our conservative lending practices, stable economy and favourable demographic trends, the Canadian real estate market is somewhat insulated against a catastrophic bottoming out like the one that squashed U.S. real estate values from 2007 to 2013 .

But the market’s not immune to the odd correction. When sales fall and prices stall after an intense period of growth, a correction — a return to whatever “normal” means for Canadian housing — is the likely explanation.

While there’s no technical definition of a housing crash, Phil Soper, president of national real estate brokerage Royal LePage, says they differ from corrections in terms of severity and duration.

“In America, the [last] real estate crash lasted about six years. A market correction should take somewhere between six and 18 months,” Soper says, adding that prices typically fall by double-digit percentages during a crash and by single digit percentages in a correction.

The most infamous housing crash most people will remember is the one that mangled the U.S. economy from 2007 until 2009. During that time, unemployment in the U.S. rose from 5% in December of 2007 to 10% in October of 2009, and the real estate market felt the consequences.

“In the United States, during the collapse of their financial system, [home buyers] didn’t have the capacity to purchase. Even dual-income families were unable to get a mortgage,” Soper says.

In a similar situation, when the Canadian economy entered a two-year recession in the second quarter of 1990, unemployment rose dramatically, peaking at 11.3% in 1992.

By August 1993, the average home price in Toronto, for example, had dropped by 28% from its April 1989 peak, bottoming out at $189,000. That’s legitimately crash-y, especially when you consider Toronto’s prices had jumped 175% in the five years before the recession. Persistent layoffs and pessimism led to a drop in home buying activity and prices for much of the next decade.

In contrast, a housing market correction doesn’t typically involve widespread job losses, which is why they don’t last as long, or do as much long-term damage as crashes. Canada’s unemployment rate, for example, was at a record low when its mid-2022 correction set in.

A correction can be thought of as a rapid cooling of buying and selling activity, one that’s typically triggered by internal factors like escalating home prices, housing policy and rising interest rates.

Crashes, on the other hand, require some sort of external fuse to be lit.

In the Canadian housing market crash of the 1990s, a combination of inflation, recession and job losses spilled over into the housing market.

It was shady subprime mortgages, as explained in the book (and later Oscar-winning movie), The Big Short, that put U.S, homeowners into loans they had little chance of paying back. Once the foreclosure dominos started falling — around 6 million ultimately people lost their homes during the crisis — the U.S. economy followed suit.

Without these outlying events — a historic, recession-triggering battle with inflation, a (hopefully) once-in-a-lifetime scamming of mortgage borrowers — it’s fair to wonder if these crashes would have occurred at all.

The housing market is largely predictable. Historically, prices have risen slowly, then a little faster, then they’ve slowed down. Rinse and repeat.

Corrections are baked into this process. Whenever interest rates rise or stricter lending guidelines are introduced, economists can predict with some accuracy the downward effect these measures will have on home buying and home values. It’s important to remember that these effects, even when they feel extreme, are temporary — and expected.

Crashes, though, have tended to blindside the market, which may be part of the reason why the repercussions last longer. In The Big Short, for example, one gets the feeling only a handful of people in the entire world saw America’s real estate crash coming in 2007. Getting people to believe them was near impossible, too. That’s because crashes are hard to predict.

Why a Canadian housing crash is unlikely

There are three reasons people don’t currently need to worry about a housing market crash.

First, our economy is growing and diversified — and supported by government stimulus when it isn’t. These characteristics help prevent mass job losses among Canadian homeowners in times of economic stress. If people can afford to pay their mortgages, they shouldn’t need to sell their homes for far less than they paid for them, which is typical behaviour in a housing crash.

Second, Canada’s mortgage lenders are exceedingly careful when evaluating borrowers. Rigorous lending standards help prevent the delinquencies and foreclosures that feed a housing crash. There’s also the mortgage stress test and mandatory mortgage default insurance for buyers putting down less than 20%. The former is designed to give borrowers breathing room in case mortgage rates rise during their mortgage terms; the latter ensures lenders get paid so they can keep financing new buyers.

The result of all these mechanisms? Canada’s mortgage delinquency rate was 0.16% as of the second quarter of 2022. Even if that increased by a factor of 10, fewer than 2% of homeowners would be delinquent and desperate to sell.

Canada’s population grew by 1.8 million people between 2016 and 2021, faster than any other G7 nation. The government’s ambitious immigration targets could add another 1.3 million new arrivals by 2024.

In a housing crash, bad economics and low consumer morale make the housing market seem toxic, and demand dries up. With Canada’s population growing so quickly, demand won’t be falling off anytime soon — among end-use buyers or investors — and that’s a good thing.

We have to view market conditions from mid-2020 until the spring of 2022 as they really were: an aberration, a freak occurrence spurred on by the lowest mortgage interest rates Canadians have ever seen. Rates and prices are currently much higher than they were two years ago, and fewer people have access to the market. It’s only natural for things to cool down, even if they’re cooling faster than expected.

Think of the market as a baseball player who decided to take steroids to get over an injury suffered in March of 2020. By June, not only had his injury healed, but he was hitting home runs at a blistering pace. He finished with 80 homers in 2020 and another 78 in 2021.

But in 2022, he decided to go clean. Without the juice, he hit 55 home runs in 2022 — still more than most players have hit in a single season, and enough to get him to the All-Star Game. But it wasn’t enough to keep many of the team’s fans, now accustomed to his unnatural feats at the plate, from screaming “You’re finished!” whenever he hit a single.

Even though today’s market might make buyers and sellers want to scream, we aren’t seeing the marks of a crash. Unemployment is historically low. The drop in prices and sales activity, while extreme, is an expected result of internal market forces.

It may be sudden, but a return to something resembling “normal” for Canada’s housing market is ultimately a good thing for everyone involved.

Clay is a NerdWallet authority on mortgages. He has covered Canadian real estate since 2015, with bylines in Mortgage Broker News and Canadian Mortgage Professional, among others.

First-time home buyer tips, like saving the right down payment, preparing for the mortgage stress test and looking for assistance programs, can reduce stress and save you money.

How Does a Mortgage Work in Canada?

A mortgage is a loan that’s specifically used to purchase a home that is paid over many years. There are different types and interest rates.

8 Mistakes to Avoid When Buying Your First Home

When buying your first home, it’s easy to be worried about making a mistake. Here’s how to avoid common errors like not budgeting for closing costs and failing to compare lenders.

A mortgage lender provides your home loan. Know your credit score and income to determine eligibility. Compare to find the best interest rate. 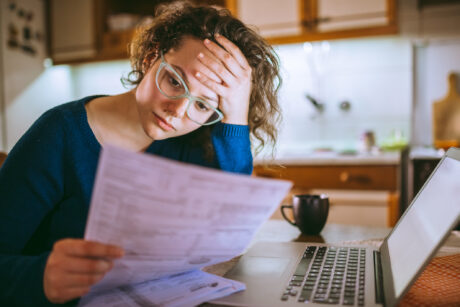 Here's What Happens If You Miss a Mortgage Payment

How to Search for Real Estate

These Upgrades May Shrink Your Home Insurance Costs