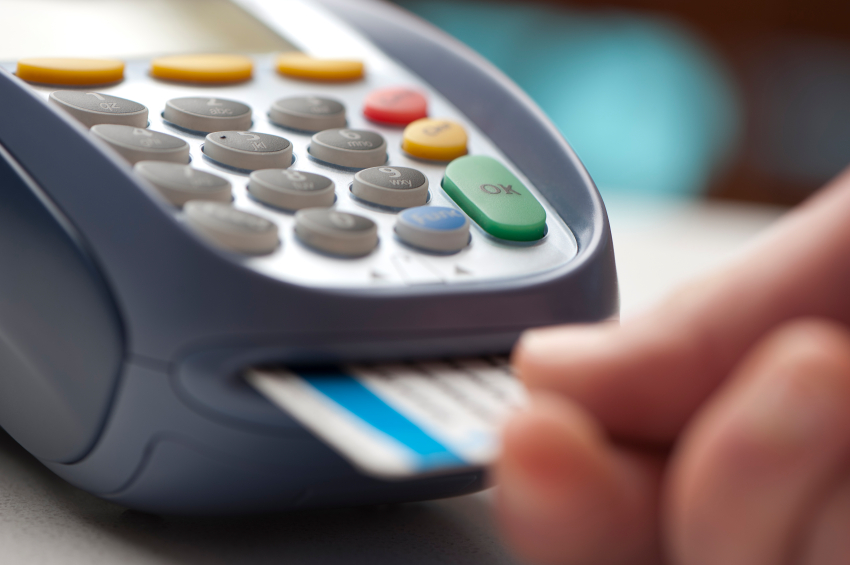 The last time you unexpectedly received a new credit card in the mail, it was probably because your bank was worried about a recent security breach.

This time, you’re getting a new card because your card issuer is adopting an international standard that will make some types of fraud much harder to pull off. If you haven’t received a chip card yet, it will probably hit your mailbox in the next few weeks.

Here’s what you can expect when you receive your new card.

What is an EMV chip card?

Credit cards with microprocessors embedded in them use EMV technology, named after the companies that developed it — Europay, Mastercard and Visa. EMV cards handle transactions much differently from traditional cards that store data only on a magnetic stripe. It’s harder for thieves to skim private information from an EMV card, and harder for them to duplicate your card to commit fraud.

“When you use the EMV chip, every transaction is creating unique, dynamic data,” says Jon Krauss, who manages the card reissue team for Discover. “If that transaction data is stolen by criminals, it can’t be replicated and reused the way a magstripe transaction could.”

Although some transactions will be more secure with EMV chip cards, the change won’t solve all security problems involving credit cards. Online transactions will work the same way, and your card will still have a magnetic stripe in addition to the chip, since retailers won’t all have equipment capable of handling EMV transactions (at least, not right away). If you use your card by swiping it the old way, the EMV technology won’t be involved, and your card will be vulnerable to the same security risks as before.

This technology has been widely used in Europe and other parts of the world for several years, but EMV chip cards have been relatively rare in the United States.

That’s changing fast. On Oct. 1, new rules go into effect that shift liability for fraudulent transactions. Currently, the card issuer is stuck with the bill if somebody steals your credit card data and goes on a spending spree. After Oct. 1, merchants can also be held responsible — if they haven’t adopted EMV technology. That deadline means credit card issuers and retailers alike are rolling out the new technology rapidly.

Some consumers have been surprised to get their new cards in the mail.

“It just showed up out of the blue,” says Brendan Byrne, a bartender who lives in Queens, New York. Byrne says he had heard that the new technology was coming, but expected that he’d be able to opt in if he wanted to.

Adoption at the store

If you have received a new chip card, you may not have had many chances to use it yet. Jennifer Fidlon-Bugat, a freelance writer in Montclair, New Jersey, says she has been able to use her chip card only once — at Target.

“The bigger the merchant, the bigger the incentive to comply with the shift,” Krauss says. That’s because large retailers have more exposure to liability since they have a greater number of point-of-sale transactions than smaller stores.

Fidlon-Bugat is hoping her new card makes it easier to travel internationally. When she and her husband visit his native France later this month, they’re expecting that the chip card will make for smoother payments at stores and restaurants. On their previous trips, not having a chip card made some transactions difficult.

“We’d get super-frustrated because we only had our regular magnetic strip cards, and there were certain things we weren’t able to do,” she says.

But Fidlon-Bugat was disappointed when she realized she’d still have to sign for many purchases. She had been hoping for a chip-and-PIN card, which are common in Europe. These have an added layer of security, because the cardholder must enter a PIN for every purchase. Whether the card you get is chip-and-PIN or chip-and-signature is up to the card issuer.

“We’re in the process of evaluating chip-and-PIN,” Discover’s Krauss says. “In the long term, we want our card members to have a choice.”

For now, don’t be surprised if you still have to sign for purchases with your new chip card.

How to get one

You may receive an EMV card from each issuer in the near future, if you haven’t already. If you don’t want to wait, you can request a new card right away. “We’re sending out millions of cards,” Krauss says.

Even though she already has a credit card with a chip, Fidlon-Bugat plans to stop by her bank before she travels to France and get an EMV-enabled ATM card as well.

EMV chip readers may take some getting used to. For one thing, you’ll insert your card into the reader and leave it there for a few seconds while the terminal communicates with the chip, rather than swiping quickly as with a magnetic stripe card.

“We’re trying to make this transition as seamless and as positive as possible for our customers,” Krauss says.

Ultimately, if EMV chips do their jobs and reduce fraud overall, you should experience fewer problems with your card than you do now.