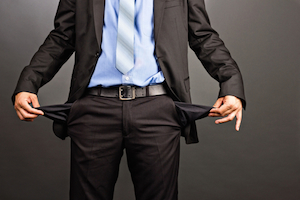 Experts agree that declaring personal bankruptcy is devastating – emotionally and financially. In addition to losing your savings and wrecking your credit, you’ll have to face the embarrassment that comes with being found insolvent.

So why does U.S. law allow individuals to declare bankruptcy? You might be surprised to learn that bankruptcy protection plays an important role in helping our economy operate optimally. If you’re not sure how, take a look at the details below.

First, it’s important to understand what bankruptcy allows from a legal standpoint: Depending on the type, moving forward with the process could wipe out almost all of the individual’s outstanding debts (see Nerd note below). This means that creditors are no longer permitted to go after the person to try to collect their unpaid bills. Many people view this as a “fresh start” after struggling for years with cripplingly large debts.

But declaring personal bankruptcy is a big deal and it has serious consequences, including:

Nerd note: It’s important to remember that not all obligations are dischargeable in bankruptcy. Alimony, child support payments and student loans are examples of debts that the court will not forgive. If your debt is coming from one of these sources, bankruptcy won’t provide relief.

A common question surrounding personal bankruptcy protection in the United States is why it’s allowed in the first place. Many believe it relieves irresponsible spenders of debts they rightly owe, while others think the consequences are so extreme that we shouldn’t permit people to go down that path.

But the truth is that bankruptcy protection helps our economic system function. For help in explaining this, the Nerds reached out to Todd Zywicki, law professor at George Mason University and senior scholar at the Mercatus Center. In an email statement, Zywicki emphasized that in allowing individuals to declare bankruptcy under very specific circumstances, we’re increasing the odds that both lenders and borrowers will take reasonable risks.

For example, people are more likely to purchase homes and start businesses because they know that if the worst happens, there is a way out. But at the same time, declaring bankruptcy isn’t so easy that lenders have to be very selective about who they lend to. Zywicki succinctly summed up the role that bankruptcy plays in managing risk: “We want risk-taking but not recklessness …bankruptcy balances these goals.”

Zywicki also noted that bankruptcy provides an incentive for people to stay in the workforce, which preserves our economy’s productivity. If we didn’t have the option to discharge unpayable debts and move forward, many people would simply quit working. He stated:

“[Bankruptcy] eliminates the ‘debt overhang’ problem so people have incentives to work by letting them keep some of their money rather than paying everything to creditors for prior purchases.”

So although bankruptcy might seem unfair or unwise, it actually provides some substantial benefits to our economy.

How to avoid going down this path

It’s clear that bankruptcy is a helpful tool for our macro-level economic system. But that doesn’t mean you shouldn’t take steps to avoid it. Again, the effects of bankruptcy on the individual are significant.

To avoid heading down this path, be sure to:

The takeaway: Declaring bankruptcy has serious consequences, but it serves an important purpose in our society. Still, you should take steps to avoid it if you can!