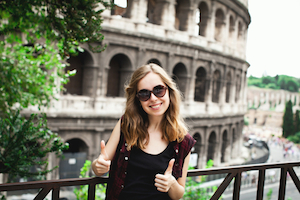 If you’re planning a trip overseas, you probably think you have everything covered. You’ve booked your tickets, found a friend to watch your dog and learned a few phrases in the local language. All that’s left to do is pack!

But have you considered how much it will cost to use your credit card while traveling abroad? Foreign transaction fees can add up, so the Nerds want you to understand what they are and how to avoid them. Here’s what you need to know.

While 3% might not seem like much, remember that this fee will apply every time you use your card. If you jet off to Europe for a month and charge $5,000 on a card that carries a 3% foreign transaction fee, you’ll have to pay an extra $150 when the bill comes due just for using your plastic.

What’s more, you could get hit with a foreign transaction fee even if you’re not physically using your card overseas. Remember, these fees apply whenever you make a purchase with your card from a non-U.S. retailer, so if you buy something online from a company based in another country, you’ll be charged the fee.

So if you frequently travel or shop abroad, it’s a smart idea to opt for a card that allows you to dodge foreign transaction fees. After all, paying this fee again and again could get pretty expensive.

Watch out for currency conversion fees, too

Most people who have taken trips abroad know how costly it can be to exchange their cash for the local currency. Whether you go to an airport kiosk or an international ATM, you’ll usually have to pay up in order to get your cash. But what most people don’t know is that when you swipe your credit card, you’re also likely being charged a currency conversion fee – it’s just not always obvious.

Unlike foreign transaction fees, currency conversion fees aren’t charged by the bank that issued your card – they’re assessed by your card’s payment processor. Visa and MasterCard both charge about 1% of each dollar you spend overseas, depending on which country you’re traveling in. The processors charge this 1% to the issuing bank, and most banks pass on the fee to you. This means that if you’re using a card that carries a foreign transaction fee, you’ll have to pay both it and the currency conversion fee on every purchase you make.

What’s tricky about currency conversion fees is that they often don’t appear as separate charges on your credit card statement the way a foreign transaction fee would. Usually, they’ll show up on your statement built into the transactions you’ve made. Also, it’s not always clear from your credit card’s disclosures how much currency conversion fees will cost you. Many consumers find that they have to compare the totals on their receipts to the transaction costs that appear on their statements or contact their card issuers to find out how much they’re being charged.

So should I travel just with cash?

By now you might be thinking that using cash instead of credit might be the smarter choice when you’re traveling in another country. But cash can be risky, especially because pickpocketing is more common in other countries than it is in the United States Plus, most banks charge hefty fees for taking cash out of foreign ATMs.

All things considered, the Nerds still advise using a credit card overseas, as long as you take the following precautions:

The takeaway: Foreign transaction fees can be pricey, so be sure to look for a card that doesn’t charge them if you travel or shop overseas frequently, and you’ll also want to keep an eye out for currency conversion fees. All in all, using a credit card for your international spending is still a smart move, as long as you keep the Nerds’ tips in mind!

Trip to Europe image via Shutterstock