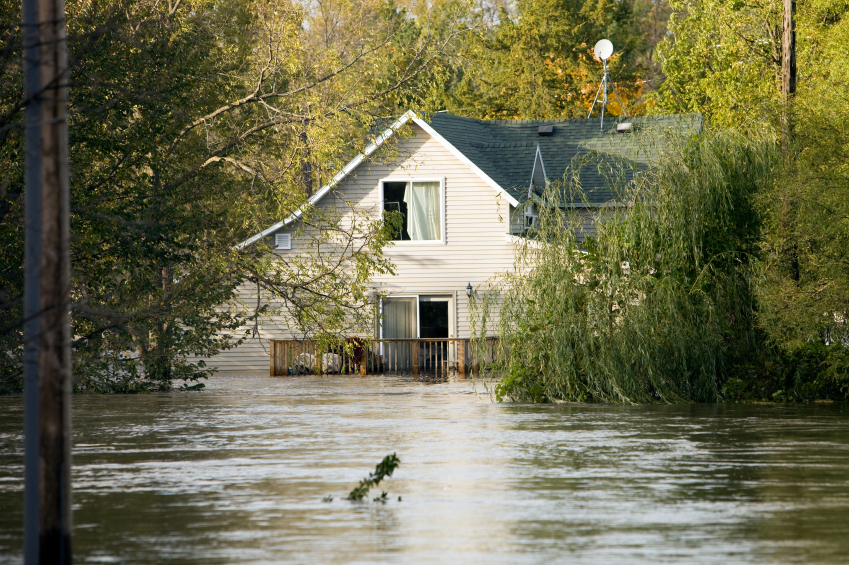 When Nicholas Pinter and his wife were shopping for a home, they avoided high-risk flood zones “at all costs.”

As Pinter puts it: “Why pick a potential disaster if you have a choice?”

Pinter would know, given that he’s a geology professor who studies flooding at Southern Illinois University.

“We’ve gone in and dealt with communities where the water’s been up to the third floor,” he says.

Flood insurance is essential protection in high-risk areas, but the price is going up, despite recent congressional action to ease the increases.

“There are some places where the insurance premium can significantly exceed the mortgage cost,” Pinter says.

The government subsidizes rates for about 20% of flood insurance policies. But it started eliminating these subsidies April 1, while also imposing a new surcharge on all policyholders as part of an effort to reduce the program’s massive debt.

Meanwhile, in the aftermath of superstorm Sandy, which hit in 2012, some lawmakers favor dismantling the federal flood insurance system, Newsday reported recently.

While the future of the flood insurance program is uncertain, there are some things you should know before you consider buying a home in an area at high risk for flooding.

Standard homeowners insurance doesn’t cover flooding. That’s where the National Flood Insurance Program comes in. People can buy insurance from one of the more than 80 private companies that sell policies on behalf of the federal government.

Consumers also can buy from NFIP Direct, the program the government established to work with outside agents, although this is not well publicized.

“I’ve been told directly by people in the flood-insurance program that they don’t do that because it makes the insurance companies unhappy,” says Bob Hunter, director of insurance for the Consumer Federation of America and former director of the National Flood Insurance Program.

Flood insurance rates are set by the Federal Emergency Management Agency based on federal flood zones. Homes in high-risk areas get subsidized rates if they were built before there was a detailed flood map in their area. Some other homes can be “grandfathered” into their old zone when maps change.

The government requires people to buy flood insurance if they’re in a high-risk zone and have a mortgage from a federally regulated or insured lender, which includes almost anyone with a mortgage. The average flood insurance policy costs about $700 a year.

Flood insurance generally covers your home and possessions, with important exclusions, such as finishings and furniture in basements. You can insure a home structure only up to $250,000. Owners and renters can also buy up to $100,000 of coverage for their contents. Beyond these limits, you’d need excess flood insurance on the private market.

With the flood insurance program $24 billion in debt, Congress acted in 2012 to eliminate subsidies quickly on many homes and phase out grandfathering when flood zones change. A backlash spurred Congress last year to restore grandfathering, maintain subsidies with home sales and policy renewals, and cap rate increases at 18% a year for primary residences and 25% for second homes. It also imposed a new annual fee of $25 for all primary homes and $250 for all second homes, subsidized or not.

So rates will continue to increase, but more slowly than under the 2012 law, unless Congress acts again.

“I’m sure they’ll try to tie income level into the subsidy at some point and make it go away for certain households,” predicts F. Michael Conte, a partner at the Honig Conte Porrino Insurance Agency in New York. “It’s too dangerous politically to make it disappear.”

David Marlett, a professor of insurance at Appalachian State University in North Carolina, notes that the flood insurance program will be up for reauthorization again in 2017.

“We’ve got a couple hurricane seasons between now and then, and we’ll have a new political environment,” he says, adding that he doesn’t expect rates to go down.

Following reports that private companies administering flood insurance underpaid victims of superstorm Sandy, Democratic Sens. Kirsten Gillibrand and Charles Schumer of New York and Robert Menendez of New Jersey say they want to consider dismantling the current system, according to Newsday. They’re not yet saying what might take its place.

While the federal government provides flood insurance, private companies get as much as 65% of premiums in any given year to cover commissions and expenses, according to a 2007 report from the Government Accountability Office. The GAO reported that FEMA doesn’t have data on companies’ actual expenses.

What you should do

One thing experts agree on is that you should understand the risks and get flood insurance if you do buy a home in a high-risk area.

“You’ve got to know what you’re getting into when you’re living near the water,” Conte says. “At any minute you could have the ocean in your basement.”

If you’re looking at a home in a flood zone, find out its elevation, that is, how high it is relative to the ground and to potential floods. This affects premiums for newer homes now and will be a factor for older ones as subsidies go away. People buying a home along the coast may need to raise the structure further at some point, Marlett adds.

Climate change is another factor to consider, according to Marlett. “With the rising sea levels, that’s just going to put more pieces of property into the higher-risk flood zones.”

Conte advises people living within a mile or two of the water to get flood insurance even if they’re not in a high-risk zone, adding: “The storms up here are getting more violent.”

People also should find out whether a home is protected from flooding by a levee, Pinter says. Although they don’t appear on high-risk flood maps, such homes are vulnerable. When the Mississippi and Missouri rivers flooded in 1993, for instance, 69% of the levees in affected areas failed or were overtopped by floodwater.

Ultimately, whether you think buying a home in a high-risk flood area is worth the cost and risk is a personal decision.

Pinter believes people should avoid floodplains if they can. Conte says he would buy waterfront property “in a heartbeat,” adding: “At the same time, I’d protect it.”

Aubrey Cohen is a staff writer covering insurance and investing for NerdWallet.