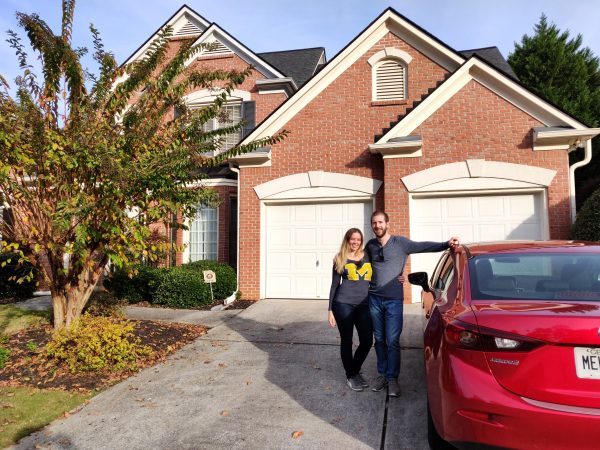 Kelly and Daniel Vaughn closed on their home outside Atlanta at the end of 2018.

In this series, NerdWallet interviews new homeowners across the country about their unique homebuying journeys and the financial decisions that helped them along the way. Email [email protected] to share your first-time homebuying story.

First-time home buyers Kelly and Daniel Vaughn didn’t sleep on Atlanta’s housing market. The couple, both 28, purchased their house in Smyrna, a suburb northwest of the city, at the end of 2018.

Vaughn runs her own company, The Taproom Agency, which helps e-commerce brands with site design, development and digital marketing. Being a self-starting entrepreneur helped her mentally (and financially) prepare for any unknowns. Even so, she says a few unexpected expenses caught her off guard and that she wishes she had saved more.

We asked Vaughn about her homebuying process, including why she would have budgeted even more and one obstacle she ran into as a business owner. (This transcript was lightly edited for clarity and length.)

What brought you to Atlanta?

I’ve been in the Atlanta area for almost five years now. I moved down to Georgia from Michigan when I was 16 but lived in other areas. My husband and I moved to Atlanta because of his job.

There is so much to do here; it’s an ever-changing city. The food scene is amazing and there are always events on the weekend. The cost of living here is pretty low compared to other major cities. It’s also a major travel hub, and we travel a lot.

Why did you decide to buy a home in Atlanta?

We first rented in Vinings, Georgia, for three and a half years before buying. We rented for that long because we wanted to afford a house we could stay in for at least 10 years (i.e., not a starter home) and didn’t want to be house poor. We ended up buying in Smyrna, a suburb outside of Atlanta.

We bounced back and forth between getting a townhouse or a stand-alone home. We ended up doing a single-family home because we didn’t want to share walls.

We also wanted a four-bedroom with a two-car garage within 10 miles of the Perimeter [Interstate 285, which surrounds most of Atlanta], because Atlanta traffic is terrible. We were looking for an open floor plan and a lot of natural light.

We are fortunate to do well for ourselves financially, so our house budget was on the bigger side, especially for Atlanta. It started in the $250,000 to $300,000 range, but ended up in the $400,000 to $450,000 range as we started doing more house visits and realized that the initial range was more suitable for a townhome. Once we changed our focus to a single-family home, we increased our budget. We factored in all of the costs, from escrow to furnishing costs and more.

We started talking about buying a house in loose terms about two and a half years into renting in Atlanta, around August of 2017. At that point, we weren’t ready to buy but wanted to at least discuss it. We started getting serious about saving for a house around May 2018. We had around $10,000 in inheritance money, but the vast majority of what we needed had to be saved. We saved a little over $60,000 ourselves and borrowed another $10,000 from parents.

I have a family friend who is a real estate agent, so in September 2018, we started going with her to see what was out there. We found the house we wanted the following month and started negotiating, which was easy since we had an agent who knew the process very well, and closed on Dec. 12, 2018.

It was fast for the market. I had a lot of friends who had a difficult time finding a house and getting an offer accepted, but this was our first offer after looking at close to 15 houses.

We ended up staying within our budget and purchased it for $432,000. It was more than I expected to spend on a house initially. It took some getting used to the idea of paying over $400,000 for a house at my age. 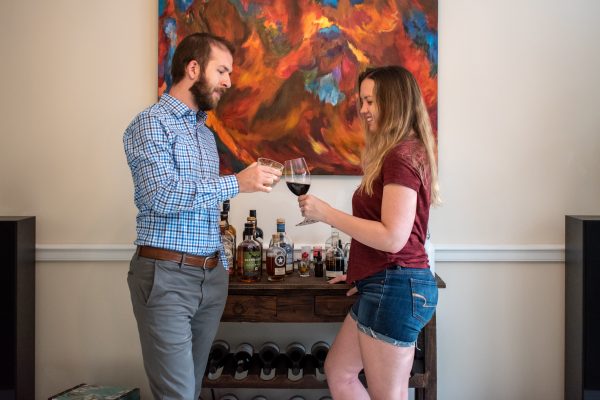 The Vaughns liked the natural light in their home and the neighborhood in Smyrna, a suburb of Atlanta.

We liked the neighborhood when we were driving into it. When we walked in, we saw all of the natural lighting, which was a big win for us. The house is big (around 3,600 square feet). It was built in 2000 and hadn’t been updated, but it had been well-kept and provided a nice template for us to do whatever we wanted with the house.

We were toying between that house and another one on the west side of Atlanta, which was smaller and farther away. For those two houses, we made a long list of pros and cons.

Both of us are savers, which definitely helped. We are self-taught when it comes to personal finance, but most of what I learned was from trial and error and taking on some debt from graduate school. I am a coder and freelanced throughout college and graduate school to help pay for my tuition, but I still had to take out student loans. When the six-month grace period for my loans ended, I received a letter saying that I still had $55,000 to pay off. That propelled my savings habits forward. For example, I put a line item in my budget specifically for paying off student loans that I keep increasing over time. (Right now it’s at $600 per month, and I’m on track to pay them off by this December.)

Since March 2018, Daniel and I have used a spreadsheet to track everything we purchase. We list out joint and individual expenses and set aside money for expected costs. We keep track of the remaining budget for the month and how we’re allocating that money. If I want to go shopping for new clothes or if he wants to buy a bottle of scotch and it’s within our budget, that’s OK.

We have multiple savings accounts, including one for our house as well as a joint travel account, and our own emergency funds. We feel comfortable splurging on travel, experiences and dining out with friends, but we’re not much for having a lot of stuff. We tend to put money aside for larger purchases, like replacing a TV or repainting our kitchen.

When we talked about buying a home, I was at a point where I felt secure in my finances. I built my business making sure that I paid myself a salary, and setting up my business that way helped the homebuying process.

» MORE: How much house can I afford?

Were there any surprises? Would you have done anything differently?

We had a positive buying experience, but I would have saved $20,000 more and started saving sooner to get our down payment up to 20% and cover moving costs. Between closing costs and paying for [a homeowners association], we exceeded our budget pretty dramatically for the first few months. We spent around $4,800 over our monthly budget in December because we had to keep buying things for our house and didn’t recover until May. (Doubling your square footage and the number of rooms will do that!)

Another thing I learned is that it’s very hard to get a home loan as an entrepreneur. The banks just don’t see entrepreneurs’ salaries as steady, so we got a loan based on my husband’s salary even though we split the cost of the house. I’ve had friends who are entrepreneurs who had to have family members co-sign their loans.

What advice would you give for buying a home in Atlanta?

Consider where you’re working. That is key because everyone in Atlanta knows how bad the traffic is, and the location can make or break your commute.

And for couples: Try to be as open and honest with each other as possible. This is one of those life-changing events you can categorize with having a child, starting a job, etc., so agree on what you’re both looking for.

Lisa Brennan, who helped the Vaughns buy their home, shared her thoughts on the first-time homebuying market in Atlanta.

Good news: Inventory is up. Brennan says that home inventory in Atlanta has increased since last year, which means that it may be a good time for first-time home buyers to jump in and see what’s available. “It’s a vibrant, exciting market right now,” she says.

There are a few neighborhoods to keep tabs on. “The Vinings area, where SunTrust Park [home of the Atlanta Braves] is located, is really up-and-coming, along with communities along the BeltLine,” Brennan says.

Get a leg up by figuring out financing. “One common mistake is not being totally prepared with a loan,” she says. “Having financing in order is huge, especially if you’re in a multiple-offer situation.”