Sean Pyles is a writer on NerdWallet’s consumer credit team. But there was a time not long ago when he was a college student just starting to figure out how to use credit. The ground floor for his credit-building effort was the Journey® Student Rewards from Capital One®. The card filled a major need during Pyles’ senior year, but there are several reasons why he graduated to another card after graduating from college.

With an annual fee of $0 and a pretty good rewards program as far as student cards go, the Journey® Student Rewards from Capital One® is a solid starter card. The ongoing APR is 26.99% Variable APR — so it’s a good idea to pay your balance in full each month. Before applying, though, understand that simply being a college student is usually not enough to qualify for any student card.

Is the Journey® Student Rewards from Capital One® your primary credit card?

“It used to be. I got the card in college because I wanted a new iPhone,” Pyles says. “The Journey® Student Rewards from Capital One® was the only card I qualified for. At the time the iPhone was about $200 — less expensive than it is now. So I just bought that and paid it off over time.” He adds, “I didn’t know that much about credit cards. … I just knew that I didn’t have enough for the iPhone all at once.” 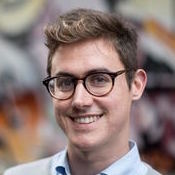 Pyles admits that financing the phone on his credit card may not have been the most responsible decision. (The Journey® Student Rewards from Capital One® doesn’t have a 0% APR period, so he did end up paying some interest.) But the purchase was made out of necessity. “I had to have something,” he says. “My old phone was crumbling, literally. The iPhone 4 had that double-sided glass.”

Did you use the card regularly after buying your iPhone?

“Not really,” he says. “I basically used it for that one purchase — I had a little bit of income from my college job, but I didn’t want to rack up debt. It was when I was out of college and had a full-time job that I’d use it for things like groceries occasionally, a pair of shoes, whatever. I didn’t really have a well-thought-out strategy for how I was using the card.”

Do you have any credit cards beyond the Journey® Student Rewards from Capital One®?

“I got the Chase Sapphire Preferred® Card a few months back because I was going on a trip abroad and wanted something with all the benefits. I actually found it after I started working for NerdWallet,” Pyles says. “Even six months prior, I had stopped using the Journey® Student Rewards from Capital One® entirely — it just wasn’t doing anything for me. I had a really low limit, and I wasn’t getting many benefits.”

Pyles’ experience is common. Student credit cards aren’t designed to be used for the rest of your life. They’re for people getting started with credit. Student cards, as well as alternative cards for those with bad or limited credit, are pretty bare-bones: low or nonexistent rewards, low credit limits and few to no perks. That makes the decision to jump to a better card — once you’ve established a credit history — easy.

Among student cards, though, the Journey® Student Rewards from Capital One® actually has a decent rewards program. It offers 1% cash back on all purchases, which rises to 1.25% for any month in which you pay your bill on time.

How do your experiences with the Journey® Student Rewards from Capital One® and the Chase Sapphire Preferred® Card compare?

“I’m a much more engaged and informed consumer now, so that changes how I use it,” Pyles says. “I think if I had the knowledge base I have now when I had the Journey® Student Rewards from Capital One®, I would’ve acted a lot different with it. Now, I take advantage of the perks. I do what I can to get the most out of the card. I know what I’m getting, and I know how to do it in the right way. That’s the biggest difference.”

So you don’t use the Journey® Student Rewards from Capital One® anymore?

“No. Two points as to why I don’t use it now: There aren’t a lot of great rewards. There aren’t really big incentives for me to keep using it,” Pyles says. “That’s made more undesirable by the fact that the credit limit is really low. It was my first credit card, so they obviously weren’t going to give me much, but the limit is like $300. It just doesn’t take you really far.”

Having a low credit line isn’t only inconvenient, it can hurt your credit score, too. If you hold a high amount of debt relative to the amount of credit you have available, your credit utilization ratio goes up.

Because your credit utilization ratio is used, in part, to determine 30% of your FICO score, the fact that Pyles limited the amount of debt he added to the card beyond the iPhone purchase more than likely improved his credit — or at least prevented it from dropping.

Do you have any final thoughts? Any clear benefits to the Journey® Student Rewards from Capital One®?

“It was a good introductory card in a way because I didn’t have access to credit, and it fulfilled that need. And I learned how to use a credit card from this card — late fees, interest, all that,” he says. “This card was kind of my training wheels for the whole process: How do you get a credit card? What do you use it for? How do you pay it off? What happens if you don’t?”

How much cash back did you earn with this card, anyway?

“I think I’ve earned about $15 cash back over three years of using it,” he says. “You just reminded me; I have that check in my drawer.”

I apply for a new credit card with limit of: