But if you switch to the cheapest insurer in your state, you may find better rates.

The bottom line: To get cheap car insurance after an accident, it’s time to shop around.

How an accident affects your car insurance rates

NerdWallet compared average car insurance rates nationwide for 40-year-old drivers with a recent at-fault crash and those with no recent accidents, keeping all other factors the same. We used full coverage policies for a 2016 Toyota Camry and a hypothetical accident that resulted in $10,000 worth of property damage and no injuries.

Our analysis found that:

See how your state fares.

Car insurance companies have wildly different viewpoints on how much to raise rates due to a crash. In some states, a few companies in our analysis didn’t charge more after a small accident.

At the other extreme, several companies showed rates more than twice as high for a driver who’d caused an accident than for an identical driver who hadn’t. And in a few cases, average rates were more than $1,500 a year higher after an at-fault accident.

State Farm, Geico, Progressive and Allstate, the nation’s four largest car insurance companies, together make up more than half of the auto insurance market.

To see how they price policies after at-fault accidents, we looked at average rates across 48 states and the District of Columbia, areas where all four companies have a significant presence.

Geico returned the lowest average rates for drivers who’d caused an accident, as well as for drivers who had not, while State Farm showed the smallest percentage increase in rates between drivers with a clean record and those with a recent crash.

The fifth-largest car insurance company, USAA, is available only to active military members, veterans and their families. For drivers who qualify, USAA frequently has the lowest rates we find — both before and after an accident.

But in some cases, USAA is no longer the cheapest option once a driver has caused an accident. In Alaska, Connecticut and Indiana, for example, USAA is cheapest for drivers with a clean record — but other companies return the lowest rates after an at-fault crash.

So if you’re insured with USAA and you get in an accident, it’s smart to check rates.

It’s possible to get a lower rate after an accident

Shopping around after an accident is the best way to ensure you are getting the cheapest rate, and our analysis shows why:

There are other ways to ensure you are getting the lowest rate possible. You may be able to lower the rates on your current policy by:

What if the accident wasn’t your fault?

If you weren’t to blame for an accident, you might see an increase in your auto insurance rate anyway. A study by the Consumer Federation of America found that some companies raise rates 10% or more for not-at-fault accidents.

In the 12 no-fault states, everyone involved in an accident files a claim to their own insurance policies for injuries. Because of this, residents of those states are more likely to see rate increases after an accident no matter who is at fault.

If you have accident forgiveness on your policy and this is your first accident, it’s likely that your rate may not go up. And a few states, including Oklahoma and California, don’t allow insurers to increase your rates if a crash was not your fault. Some companies, such as USAA, even say they won’t raise rates if you aren’t responsible for an accident.

But regardless of whether it’s your fault, it’s always a good idea to compare car insurance quotes to make sure you’re getting the lowest price.

If you have multiple accidents or other serious marks on your record, it could be hard to get car insurance.

If no one will sell you a policy, you may need to look for a state-run assigned risk plan. To find your state’s high-risk insurance pool, locate your state in the directory of the Automobile Insurance Plan Service Office, an industry organization, or ask your auto insurance agent for help.

To rank states for rate increases after at-fault crashes: NerdWallet averaged rates for 40-year-old men and women for 20 ZIP codes in each state and Washington, D.C., from the largest insurers, up to 12 in each state. “Good drivers” had no moving violations on record and credit in the “good” tier as reported to each insurer. For the other profile, we added one at-fault accident, resulting in $5,000 worth of property damage and no injuries, keeping everything else the same. Sample drivers had the following coverage limits:

In states where required, minimum additional coverages were added. We used a 2015 Toyota Camry in all cases.

To rank the largest companies for rate increases after at-fault crashes: For the nation’s four largest insurers, we averaged rates for each company for 20 ZIP codes in 30 states and Washington, D.C., for drivers with no moving violations and credit in the “good” tier as reported to each insurer, and for drivers with one at-fault accident resulting in $5,000 worth of property damage and no injuries, keeping everything else the same. The same vehicle and coverage limits were used as listed above. The 30 states, in which each insurer had a significant presence, are Alabama, Arizona, Arkansas, California, Colorado, Connecticut, Florida, Georgia, Hawaii, Idaho, Kentucky, Louisiana, Maine, Maryland, Nevada, New Hampshire, New Jersey, New Mexico, New York, North Carolina, Ohio, Oregon, Pennsylvania, South Carolina, Tennessee, Texas, Utah, Virginia, Washington and West Virginia.

These are sample rates generated through Quadrant Information Services. Your own rates will be different. 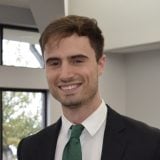 Ben Moore is an insurance writer at NerdWallet. Read more