As a real estate appraiser, Elvia Mota estimates the value of a building or piece of land. Her expertise came in handy when time arrived for her and her husband, Rob Van Sciver, a chemical engineer, to buy their first home.

The couple, who met in Los Angeles and moved around for Van Sciver’s job before relocating to Salt Lake City, had only a few days to house hunt in the area. They bought a bungalow for $287,000 in November 2016, a few months after getting married.

We asked the couple about their whirlwind homebuying experience and also got some tips for first-time home buyers from a Salt Lake City-based Realtor. (This transcript was lightly edited for clarity and length.)

What brought you to Salt Lake City?

Rob: We moved from Santa Barbara, where we had been living for a year and a half. My job brought us to Salt Lake City. I lived here for six months about five years ago, and I liked it. I’m an avid skier.

Elvia: I was looking forward to moving here. We lived in a rural area of Santa Barbara County, so I was welcoming the change of living in a city. We’re now in the Liberty Wells neighborhood of Salt Lake City, close to downtown.

Why did you decide to buy in Salt Lake City?

Elvia: Since we were doing a lot of moving, it was never practical to buy a home. When we moved to Salt Lake City, we expected it to be a long-term move, so it seemed to be the right time to purchase our first home. I’m also a real estate appraiser, so I had some knowledge about how hot the market is here, and it certainly hasn’t disappointed. We’ve already gotten quite a bit of equity on the home.

Elvia: We definitely were looking at character and functionality, but we weren’t too focused on size since it’s just the two of us. We wanted it to be at least two bedrooms and two bathrooms. We also cared a lot about walkability.

Rob: I didn’t care too much about what it looked like. Elvia has more of an eye for style. I just cared about the price range. Our budget was $300K.

Elvia: He was definitely more focused on the budget than I was. I was looking at places just a bit over. Luckily we found something under our budget, and it’s great in terms of location and character. We found a 1920s bungalow. It’s fairly updated but has some fun old features.

Rob: Once we found out we were moving to Salt Lake City, Elvia started looking at houses. That gave us a feel for what we were looking for and what I was willing to pay. I would have been clueless without her research.

Elvia: As a real estate appraiser, I do have a leg up on real estate lingo and the homebuying process. It was a relocation, so we had a very limited amount of time. We came out in October 2016 and had less than a week to look at homes. Our Realtors, Shawna and Kristy, bent over backwards for us. We looked at 20 or so, and ours was the last house we looked at. I happened to be up late the night before and saw it come onto the market, so I brought it to our Realtors’ attention.

Rob: We were here for five days. We actually had to leave the day we put in our final offer. We were spending the night in Las Vegas, on the way back to L.A., when we found out that they chose our offer. If they hadn’t taken our offer, we would have been stuck with renting until we were able to close somewhere else since we had to be out here the following month. It was the only house we put in an offer for.

Elvia: I think they had three offers. Our Realtors wrote a sweet letter for us. The sellers liked our story and went with our offer even though it wasn’t the highest. We really lucked out. It was an incredibly smooth process. We had nice sellers, and our Realtors were phenomenal.

Rob: It was listed at $285K and we first offered $280K. Within 48 hours, the sellers asked us for our best offer, so we landed on $287K. I believe we were only $1K below the highest offer, although I can’t confirm that.

How did you know this house was the one for you?

Rob: It’s on a nice, quiet street in a quaint neighborhood; it’s also so close to downtown and Liberty Park. You get that homey feel without the city noise.

Elvia: It’s a bungalow-style four bedroom and two bathroom, but two of the bedrooms and a bathroom are in the basement, which is quirky; it has a 6-foot ceiling. One special thing was an archway that divides the dining and living area, as well as wood framing around the doors and chimney. But what sold us was the neighborhood, which was up-and-coming. Once we got a full understanding of different areas, we realized we were a few blocks away from a really great park, cute shops and restaurants. Once we dialed into these blocks that were affordable — the other side of Liberty Park is out of our price range — it was really just this house that was available at the time. 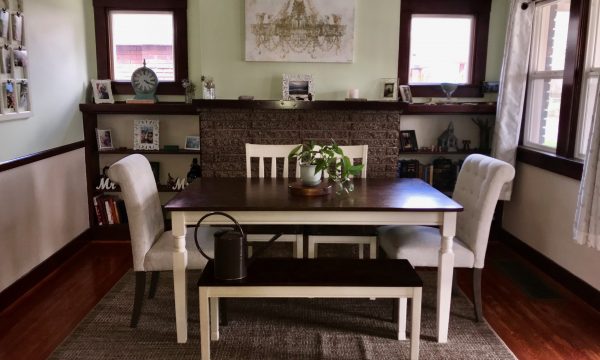 What’s your approach to finances, and how did you save for the home?

Rob: We didn’t combine finances before getting married, so it was the first time we looked at each other’s accounts and had a shared checking account. It led to a couple of battles, but in the end we came up with a defined budget to reach a common goal. My parents gave us $20K, which I wanted to use for the down payment. Our budget for the home was $300K, and our real estate company gave us a couple of offers for financing. We wanted to get in the range of $1,500 a month for payments. We’ve been able to put away extra money because most of my paycheck goes toward monthly expenses while Elvia’s goes directly into savings.

Elvia: My husband was firm on the budget, which was realistic for our income and the fun we like to have. We definitely enjoy going out, but it’s all budgeted for. We have a certain goal every month for savings. It’s a pretty happy medium. One thing we got out of this neighborhood is that I don’t need to use my car very much. Rob does commute to work, but I work from home and hardly ever drive. I have an old car, a beater, but I don’t need to get a new car just yet.

Rob: A year into the house, the electrical went out in a corner of the room. One of the previous owners had done some work that was not up to code. We were fortunate that the house didn’t burn down. It’s not something you would find in a typical home inspection.

Elvia: Maybe we should have done an electrical inspection. Aside from that, we had some work to do, but it was all work that we knew about when we purchased the home. It is an older home, so there is more to maintain in that sense.

What advice would you give to someone considering moving to Salt Lake City?

Rob: Do it! It really is a great and beautiful area and it’s growing financially. Even if you’re not a skier like I am, you’re going to love it here. The mountains are so close to the city that you can see them from anywhere.

Elvia: The housing market was hot when we moved, and it’s even hotter now. Our neighbor just sold a home for $390K, which is a good indicator of the value of this neighborhood. It’s pretty incredible how much it’s appreciated.

We spoke with Daryn Edmunds, a principal broker at High Road Properties in Salt Lake City, about what first-time home buyers in the area should know. Here are his insights:

Salt Lake City is currently a tough housing market, especially for first-time buyers. “2018 is the most competitive year we’ve seen so far,” Edmunds says. “We’re seeing a supply shortage on homes in the typical price range for first-time buyers ($200K to $325K). Inventory has gotten squeezed in the range.” The median price for a single-family unit in Salt Lake City was $325,000 for the first quarter of 2018, he says.

Don’t just look for a deal. He’s seen many first-time home buyers make the same mistake. “They look for a deal instead of the home they truly want, and deals don’t really exist right now,” he says. “It’s typical for first-time buyers to lose two to five homes in a row because they made offers that weren’t strong.”

Make your offer stand out. As in a lot of other cities, many sellers in Salt Lake City receive multiple offers the first day they list their home. Edmunds emphasizes the importance of sending “a complete package,” which includes a preapproval letter, a deposit and a personalized letter explaining who you are and why you love the home, in addition to partnering with a strong real estate agent.

Choose your advice carefully. He says that many first-time home buyers rely heavily on advice from family and friends who may live in different states, which can hurt more than it helps. “Getting advice from folks who aren’t experts in your area can cause problems,” he says, citing examples of friends who recommended a lowball offer. “Buyers can waste time and lose out on homes they otherwise would have won. Listen to local experts and make sure you’re connected with people who know the area.”