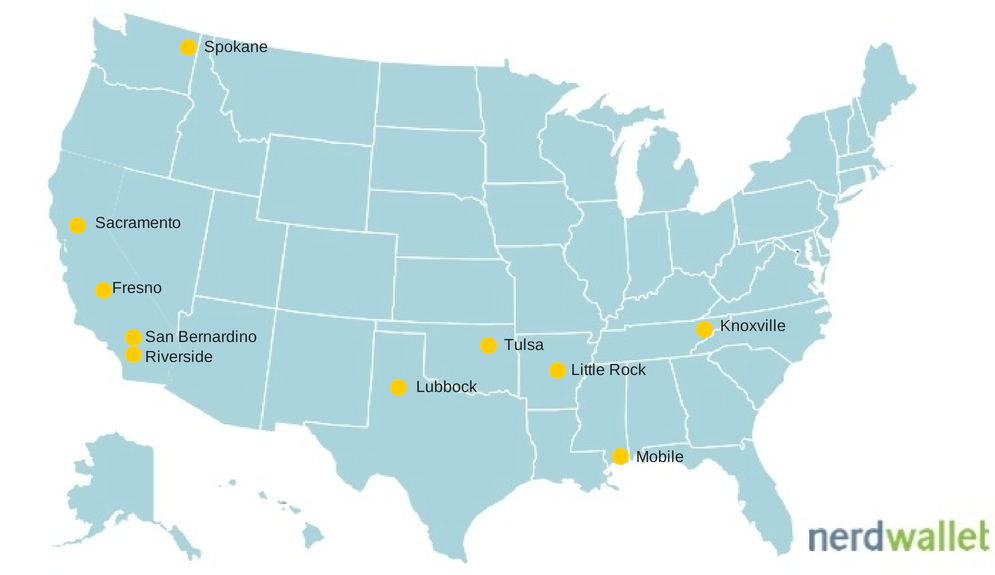 DUIs have a high cost, both human and financial. In 2012 alone, 10,322 people were killed in alcohol-related vehicle accidents. There’s also the staggering economic cost of drunk driving — an estimated $199 billion a year in the U.S. And the financial burden after receiving a DUI can be crippling for drivers, who have to pay expensive fines and court costs, then pay again after their car insurance premiums increase.

Drivers in some cities are disproportionately affected by these costs. For example, you are more likely to encounter a drunk driver in Tulsa, Oklahoma, than in San Francisco, California. Even so, the cities with the highest number of fatal alcohol-related vehicle crashes per capita aren’t the cities where drivers see the steepest auto insurance increases after receiving a DUI.

Using data from the National Highway Traffic Safety Administration, NerdWallet analyzed the 150 largest U.S. cities and found the places with the most fatal alcohol-related car accidents per capita. We also used NerdWallet data to find the average car insurance premium increase drivers will have to pay after receiving a DUI. At the national level, we found no correlation between cities with high rates of fatal crashes involving alcohol and cities where drivers experience steep car insurance increases after they receive DUIs.

For a full ranking of the 150 cities analyzed in this study and to download the raw data, click here.

Cities with the most alcohol-related fatal crashes per capita

San Bernardino residents who get DUIs also face hefty car insurance increases. On average, they can expect to pay $1,282.43 more a year, or about $400 more than the national average of $857.53 a year, for car insurance after a DUI.

Drivers in Riverside who receive DUIs will face slightly steeper car insurance rate increases than San Bernardino drivers. The average Riverside driver pays $1,001.94 a year for car insurance. After a DUI, that number jumps 140.16% to $2,406.25.

Drivers in Tulsa face below-average insurance rate increases after they get a DUI. Tulsa drivers can expect to see a 42.34% increase in their yearly car insurance rates after a DUI. The average driver pays $1,472.03, and will see yearly premiums increase to $2,095.36 after a DUI.

All motor vehicle crash data comes from the National Highway Traffic Safety Administration. Population data comes from the 2010 U.S. Census. To determine average insurance premium increases, we received quotes for eight driver profiles: 27-year-old single men and women, and 40-year-old married men and women each driving either a Toyota Camry or a Ford Escape. For the driver profiles, we picked each city’s three cheapest car insurance quotes — before and after a DUI — to mimic consumer behavior and to determine our overall average. In our study, we use preferred ZIP codes only, so three Nevada cities — Spring Valley, Sunrise Manor and Paradise — were left off the list. The actual insurance increases you face will vary depending on your insurance carrier, your location and other factors.

Cities with the Most Fatal Alcohol-Related Car Crashes per Capita

Cities with the Fewest Fatal Alcohol-Related Car Crashes per Capita