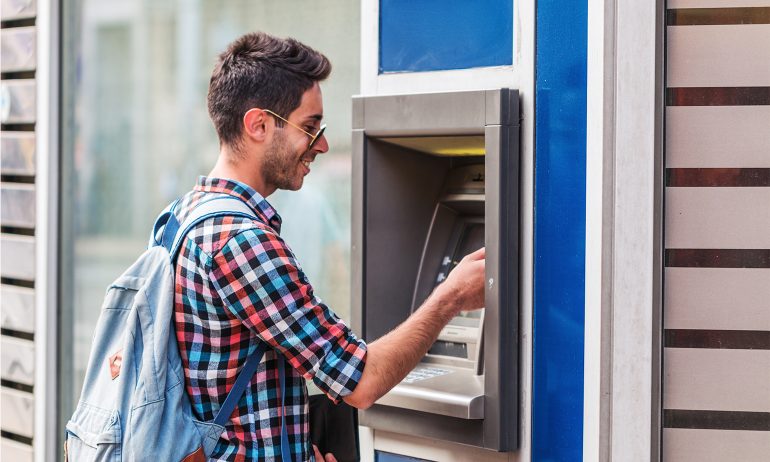 The best national banks are available across the country and offer extensive ATM networks as well as features like sign-up bonuses and strong interest rates. Some have brick-and-mortar locations, and others are available only online.

+ Looking for the largest national banks instead?

If you’re most interested in being able to visit a bank branch, you might want to explore the largest national banks instead. Here are the top six in the U.S., based on their assets, that also have at least 1,000 branches across 15 or more states. You can read more about each in our reviews.

Click on each bank’s name to read NerdWallet’s review.

» If you’re interested in the best banks and credit unions overall, check out NerdWallet’s picks

Its checking sign-up bonus sets Chase apart from other large banks, and it has locations and ATMs across the U.S. Accounts come with monthly fees that are fairly easy to avoid, but interest is low on checking and savings accounts.

Bank of America offers good accessibility and communication channels, but like other large brick-and-mortar banks, interest rates are minimal.

Discover is an online bank with high yields on savings and certificates of deposit, and a rewards checking account.

Ally has no physical branches, but fees are low and interest rates are high.

Keep in mind that having branch access usually means paying more in fees and earning less interest. If you’re curious what you’d be giving up in returns, run your balance through our calculator.

What does it mean to be a national bank?

For the purposes of this roundup, national banks are financial institutions with a presence in at least 15 states. For banks with branches, we considered only those that had at least 1,000 locations, but some of the banks are online and have no branches. Accounts at these online banks are available to people living in almost every state.

National banks tend to have more technological resources and a wider variety of products than a smaller bank; on the other hand, smaller banks can offer more personalized service.

How much interest do the best big banks pay?

And like other online banks, the best national online banks often have higher APYs. It’s not hard to find rates of 2% or above.

Are national banks better than other kinds of banks?

That depends on what you’re looking for. If your biggest priority is in-person accessibility, a national, brick-and-mortar bank might be a good fit. You’re more likely to find a branch no matter where in the U.S. you are. If you’re interested in the best rates and large ATM networks, one of the best national online banks might be a good fit.

If having access to a branch far from home isn’t a priority and you really value in-person, personalized service, a regional or community bank might be better for you.

» Find out what sign-up bonuses banks are offering this month

Many online banks allow people to sign up from almost anywhere in the U.S., while most brick-and-mortar banks have some states they don’t serve. For example, Chase has branches along the East and West coasts, but doesn’t serve some Western states.

What makes the best big brick-and-mortar banks different from the best online banks?

While both are open to many people in the U.S., brick-and-mortar banks have more in-person accessibility, while online banks have long call-in hours for customer service or large ATM networks.

» Learn more about the pros and cons of online banking

Is my money safer in a national bank?

Your money is equally safe in any bank that’s insured by the Federal Deposit Insurance Corporation. As long as your bank has this protection — and most banks do — you’re insured for up to $250,000 per person, per ownership category, per bank.

» Read up on FDIC insurance

What is the #1 bank in America?

Currently, the largest bank in America by deposits is Chase Bank. It has branches in about 30 states and about 16,000 ATMs, as well as 24/7 customer service via phone.

That doesn’t necessarily mean Chase is the bank you should choose, though. Weigh its interest rates, fees and additional factors against other options in your area before making a choice.

» Learn more: How to choose a bank

Which bank is the best rated in America?

There are many ways of rating a bank, but customer satisfaction is an important one. According to the J.D. Power 2019 U.S. Retail Banking Satisfaction Study℠, Chase is the only one of the country’s top five largest banks to win any region.

Chase is the bank best rated for customer satisfaction in California and Florida. It earns a rating of “better than most” (or 4 out of 5 stars) or better in nearly every other region.

What are the top ten banks in the United States?

According to the most recent Federal Reserve data, the top ten retail banks in the U.S. by assets are:

These banks typically have large branch and ATM networks and offer lots of different products, as well as long customer service hours. But before signing up with one, you should consider your priorities, including interest rates and accessibility.

Which is better: Chase vs. Wells Fargo? Wells Fargo vs. Bank of America?

The country’s biggest banks have similar offerings. However, there are some differences. For example, Wells Fargo makes it slightly easier than Chase or Bank of America to waive fees on basic checking. And Chase doesn’t charge fees for overdraft protection transfers, while the other two do.

The best bank for you depends on which specific services you use the most and which bank has the most branches and ATMs nearby — so it’s worth digging into the details.

You can read more at NerdWallet’s head-to-head comparisons of the country’s biggest banks:

Chase vs. Bank of America

Wells Fargo vs. Bank of America

Which national banks will pay me a bonus?

Some banks offer a sign-up bonus for new customers who open accounts. These days, it’s not unusual to find bonuses of around $200.

To determine the best accounts, we took a close look at 70 financial institutions, including the largest U.S. banks based on assets, debit card volume, internet search traffic and other factors; the nation’s largest credit unions, based on deposits as well as broad-based membership requirements; and other notable and/or emerging players in the industry. For this roundup, we considered only those brick-and-mortar banks with at least 1,000 branches in at least 15 states and broadly available online banks.

How we rate banks and credit unions