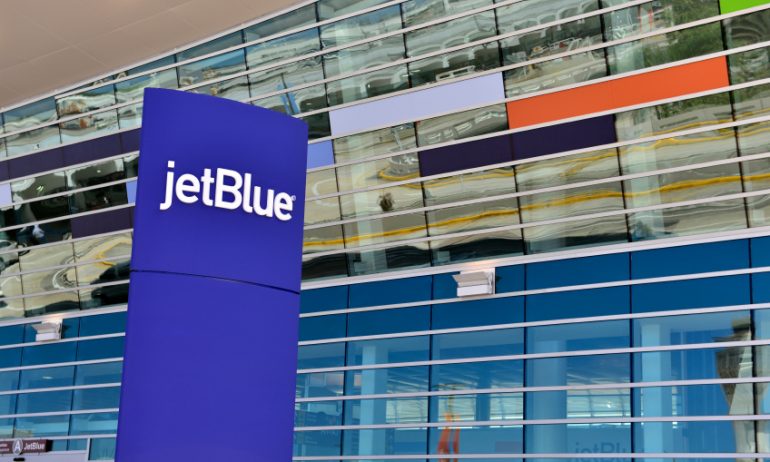 JetBlue Airways is known for its affordable fares and frequent flights to beach destinations. From its early focus on the eastern U.S., the airline has gradually expanded operations to more areas of the country. Hub cities include Boston, New York (JFK), Orlando, Fort Lauderdale, Florida, and Long Beach, California. It also flies to dozens of locations in the Caribbean, Mexico and South America, including Turks and Caicos and St. Thomas.

If you fly JetBlue frequently, or you could do so, the airline’s fares can become even more appealing when paired with JetBlue’s TrueBlue rewards program.

How much JetBlue TrueBlue points are worth

Based on our most recent analysis, NerdWallet values JetBlue TrueBlue points at 1.3 cents apiece. To determine the value of reward miles, we compared cash prices and reward redemptions for economy roundtrip routes across several destinations and dates. We divided the cost of the cash ticket by the cost of the reward ticket to determine a “cent per mile” value for each flight, then averaged this value across several flights and dates. Read more about how we arrived at these figures.

This is therefore a baseline value for JetBlue points, based on real-world data collected from hundreds of economy routes, not a maximized value. In other words, you should aim for award redemptions that offer 1.3 cents or more in value from your JetBlue points.

To determine the value of your points for specific flights, divide the cash value of the ticket (less any applicable taxes/fees if you redeem miles) by the number of miles required for the flight. So if the ticket would cost either $100, or 15,000 miles + $10 in taxes/fees, the math would be as follows:

How to earn JetBlue TrueBlue points

JetBlue’s program gives rewards called TrueBlue points. Joining the TrueBlue program is free and you can start earning points by booking flights online. Points do not expire, according to JetBlue’s website.

EARNING TRUEBLUE POINTS when you fly

Earning on JetBlue: The number of points you earn depends on three factors.

Full details about what you get (or don’t get) with JetBlue’s fare classes are available on JetBlue’s “Our Fares” page.

Other flight programs offer additional points: Purchasing an “Even More Space” seat earns you an additional 200 TrueBlue points. Flying with your pet gets you 300 extra points, and booking a JetBlue vacation package (airfare plus hotel) earns 6 points per dollar spent.

According to JetBlue’s website, there are no blackout dates on flights operated by JetBlue, so you can use points for any seat at any time, and points don’t expire. In addition, JetBlue offers the option of pooling points with family and friends.

Earning on other airlines: JetBlue has partnerships with a handful of other airlines, such as Icelandair, Hawaiian Airlines and Emirates. In general, the number of points you earn with partners is based on distance flown.

Learn More
NerdWallet’s favorite co-branded credit card for the airline is the JetBlue Plus Card. It earns 6 points per $1 spent on JetBlue purchases, 2 points per dollar at restaurants and grocery stores and 1 point per dollar on all other purchases. It’s the rare airline card that offers bonus points at merchants other than the airline itself. You start off with a nice sign-up bonus: Earn 40,000 bonus points after you spend $1,000 on purchases within the first 90 days.. And cardholders earn 5,000 bonus points on their account anniversary every year. The annual fee is $99.

JetBlue partners with dozens of retailers, hotels and other merchants, allowing you to earn additional TrueBlue points. A sampling of offers available as of January 2020:

Search for partners and get details about earning at the TrueBlue partnerships page.

You can buy additional TrueBlue points through the website, but they are expensive. If you buy 1,000 points, which NerdWallet values at $13, you will pay $37.63 — so you are paying nearly triple what they are worth.

How to redeem JetBlue TrueBlue points

You can use TrueBlue points to book flights or vacation packages online. The number of points required for a free flight depends on the fare, according to JetBlue. When you search for flights at JetBlue.com, you have the option of seeing the fare displayed in either dollars or points.

You can also donate points to charities, buy magazine subscriptions with them or use them to book JetBlue vacation packages or flights on Hawaiian Airlines.

Unlike other airline loyalty programs, TrueBlue doesn’t offer any redemption options that give you less than 1 cent of value per point, so you’ll likely get a decent return on your rewards no matter how they’re spent. Purchasing vacation packages, which include flights bundled with hotel accommodations, can be a more valuable redemption option than booking flights alone. An even more valuable option is redeeming points for magazine and newspaper subscriptions, which comes out to around 4 cents per point.

Given the good value of TrueBlue points regardless of how you redeem, your only truly bad option would be to fail to use them.

Anyone can sign up for TrueBlue for free; once enrolled, you’re a basic member. The program has an elite status level, known as “Mosaic.” There are two ways to qualify:

As of January 2020, JetBlue lists the following airlines as partners that allow you to earn TrueBlue points on their flights:

The following credit cards allow you to earn TrueBlue points: