Here’s some bad news for your bank account: Savings interest rates will begin to fall. The Federal Reserve’s announcement on Wednesday that it’s cutting the federal funds rate a quarter of a percentage point will likely lead banks to lower their savings account yields.

But there’s still a way to take advantage of today’s higher interest rates: CDs, which may start to look more attractive given the Fed’s decision. A CD, or certificate of deposit, is a type of savings account with a fixed term and typically a fixed rate. It’s generally best for savings you can leave untouched for a few months or years.

Rates on new CDs dipped in previous weeks, partly in anticipation of the Fed rate cut, but they still remain high — and your rate will remain locked in for the full term of any CD you get.

“The change of the interest rate environment could impact the cost-benefit analysis” people make when choosing whether to get CDs, says Katie Miller, senior vice president of savings products at Navy Federal Credit Union.

If CDs are right for your money goals, it’s better to open them sooner than later. There’s no guarantee that high rates will last.

» Ready to compare? Check the best CD rates this month

When CDs have an edge

CDs generally have fixed interest rates. This means the rate for your CD, once opened and funded, stays the same until the term ends. Regular savings account rates are variable, meaning they can rise and fall at the bank’s will.

There are already hints of a downward trend. Two online banks, Ally and Goldman Sachs, recently lowered the rate on their high-yield savings accounts.

“Many financial institutions have adjusted rates, in part due to the impact of a potential Fed rate cut on the market,” says Brandon Frank, assistant vice president of savings and membership at Navy Federal Credit Union. But “there are exceptions to the rule.”

In July, the military-focused credit union went against the industry trend by raising its five-year rate to 3.50% APY, one of the industry’s highest. (If you aren’t affiliated with the military, you can still find high CD rates elsewhere.)

In a falling-rate environment, the certainty of a CD rate can become more appealing. Navy Fed, the nation’s largest credit union, has seen this play out recently.

“We’ve actually seen members coming to us with an urgency since they are recognizing that rates are dropping,” says Navy Fed’s Miller.

Rates on new CDs are dipping

In May, the national average rate for a five-year CD climbed to 1.28% APY, the highest it’s been since 2011, based on data from the Federal Deposit Insurance Corporation. One-year and three-year rates had similar trajectories, rising to 0.67% APY and 1% APY, respectively. But those national averages have begun dropping.

The trend has been more dramatic at online banks and credit unions, which typically have the highest yields on CD rates. One-year, three-year and five-year rates peaked early this year, with a five-year yield of 3.14% APY as the average across 10 institutions, according to a NerdWallet analysis. 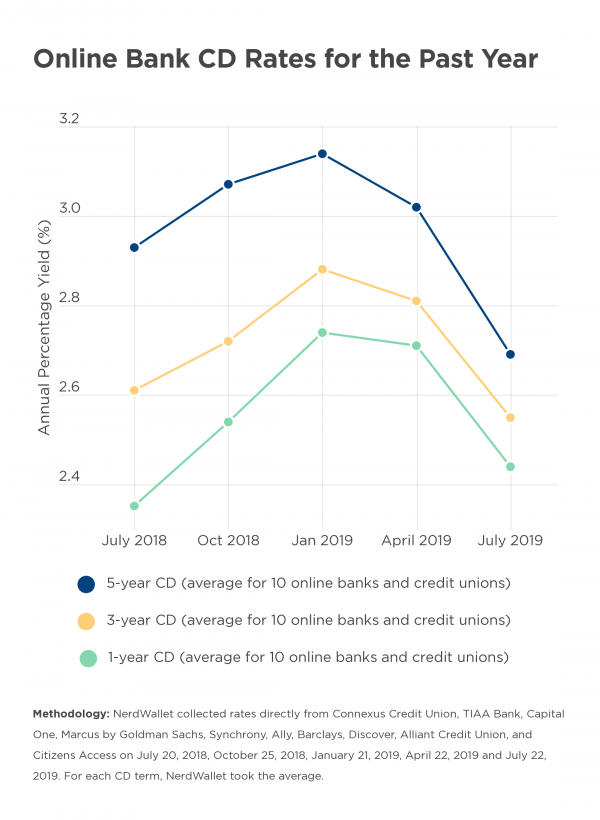 Generally, if some CD rates start to drop, other rates will follow, says Michael Kealy, education coach at the brokerage firm TD Ameritrade.

When rates are falling it’s better to lock in CDs, especially terms of three years or longer, at today’s rates, says Derek Brainard, director of financial education at AccessLex Center for Financial Capability.

But you first want to ensure CDs fit into your overall financial plan.


» See how much you can earn using NerdWallet’s CD calculator

When CDs may be right for you

Think of CDs as savings accounts for certain occasions. The money in a CD is locked for a set term, typically from three months to five years. Here are two scenarios when CDs may be a better fit than a regular savings account:

When CDs aren’t the right choice

Not everyone needs CDs. Here are two scenarios where CDs aren’t the solution:

» Curious about these accounts? See our explainer on cash management accounts

2. If you want to grow your retirement fund and you’re decades away from retiring, CDs aren’t as effective as stocks. Younger investors have more time to weather fluctuations from the stock market than investors within a few years of retirement. While CD rates generally max out between 2% and 3%, the average annual return from the stock market, adjusted for inflation, is around 7% to 8%.

Choose CDs based on your savings goals more than the rate environment, says Brainard of AccessLex. Given the many factors that go into the Fed’s rate decisions, “it’s just not possible to know what’s going to happen” in the long term, he says.