Learn More
It doesn’t offer traditional rewards, and the razzle-dazzle it does provide — a 5% discount — is limited to eligible purchases at Target. But if you already do most of your household spending there (entirely possible at a retailer of Target’s size), that’s a lot of potential savings, which is why it’s among NerdWallet’s best store credit cards.

Still, as with any card, you should use a Target card smartly and responsibly.

Mistake No. 1: I used it outside Target — frequently

Target’s REDcard products include a debit card and two credit cards, all of which have an annual fee of $0 and offer the same 5% discount. But there’s a key difference in where you can use these cards:

I got into trouble with the second one.

I opened the Target REDcard™ Credit Card in the mid-aughts, after some salesmanship from the checkout clerk who promised me I could save money immediately on that day’s purchase by filling out an application in store.

The clerk may have mentioned the ongoing 5% discount, but it didn’t even register for me at the time. All I heard was “upfront savings today!” — and all I knew was that I now had another way to pay for things at Target.

I was approved and got that one-time upfront discount, and all went well at first. I didn’t shop at Target much, so the risk of overextending myself was low. But after some time as a Target REDcard™ Credit Card cardholder, I got upgraded to the open-loop Mastercard.

I used my card almost anywhere BUT Target — and had nothing to show for it except a high ongoing interest rate.

Again, the notice in the mail may have reemphasized the 5% discount at Target, but all I took away from it was that I now had another way to pay for things anywhere!

And that I did, using the card almost anywhere but Target, which defeated its purpose and left me nothing to show for it except a high ongoing interest rate. The ongoing APR is 25.15% Variable.

» MORE: Before you get a retail credit card, consider your options

Learn More
Applying for a store card didn’t make a lot of sense for me. I wasn’t a frequent Target shopper then, and I’m still not today. I would have been much better off applying for a general rewards credit card, which might have offered me a sign-up bonus I could eventually use to defray my Target purchase from that day and would have rewarded me for all the spending I was doing elsewhere. Plus, the interest rate would probably have been lower. The Chase Freedom Unlimited®, for instance, covered those bases for me, and by 2017 — when I’d gotten to a better place with my credit and my scores — I applied for it. The card features a sizable welcome offer: Earn a $150 Bonus after you spend $500 on purchases in your first 3 months from account opening. More importantly, it earns 1.5% cash back on all purchases, no matter where. It features an intro 0% APR for 15 months on purchases and balance transfers, and then the ongoing APR of 14.99% - 23.74% Variable APR.

As you might imagine, by putting so many everyday purchases on my Target card, I bumped up against its credit limit — often. I treated the card as if it were money I actually had in my own bank, and I carried large balances from month to month.

So not only was I not getting the 5% discount on my purchases that is the single selling point of the card, and not only was I incurring massive interest charges, but I was also running up my credit utilization.

I was well above the 30% credit utilization threshold on my Target card for years, and my credit scores suffered as a result.

Credit utilization is the amount of debt you owe as a percentage of your available credit, and it’s one of the largest factors in your credit scores. Typically, you want to aim for 30% or below.

I was well above that threshold on my Target card for years, and my scores suffered as a result.

Learn More
Quite simply, I used my Target card to make purchases I couldn’t afford — everything from furniture to emergency vet and car repair bills — and I made only minimum monthly payments. That’s a perfect recipe for staying in debt. Even if my card had been earning me rewards beyond a 5% discount, the ongoing interest I was paying would have far outstripped that value. But I was young, often stretched for cash and fairly new to credit cards. I barely grasped what an APR in the high 20s even meant. If I needed to make emergency purchases, I should have turned to a card that would have allowed me to finance such expenses over a long period of time. A good example would have been the U.S. Bank Visa® Platinum Card, which was NerdWallet’s award winner for 2020’s best 0% intro APR credit card. It offers an intro 0% on purchases and balance transfers for 20 billing cycles, and then the ongoing APR of 13.99% - 23.99% Variable APR.

I should have paid off purchases immediately after making them, but I barely grasped what an APR in the high 20s even meant.

Mistake No. 3: I used retirement money to pay it off

Any financial advisor will tell you that this is a big no-no. Even if you’re deeply in debt thanks to sky-high credit card APRs, it’s almost never a good idea to withdraw retirement funds early, thanks to taxes and withdrawal penalties. Plus, you’ll sacrifice future gains from that money, and future gains are the entire point of such funds.

At the time, in 2012, I had more than $10,000 of debt on my Target card alone. I’d just moved from South Carolina (low cost of living) to Los Angeles (extremely high cost of living), and bills were piling up like cars on the 405. I felt quite frankly like I was drowning.

It was certainly not the smartest money decision I’ve ever made, and I paid for it dearly at tax time the next year.

To my younger and less financially educated self, the ability to pay off a large and extremely high-interest debt in one fell swoop felt worth it, especially since it didn’t completely drain my IRA. The truth is, I was so happy to be rid of that debt that I didn’t care about the consequences.

It was certainly not the smartest money decision I’ve ever made, and I paid for it dearly at tax time the next year.

Learn More
A much wiser move would have been to open up a balance transfer credit card with a lengthy 0% intro APR offer and move the Target card debt there. And in fact I’ve since taken that route for some other unrelated credit card debt. In 2016, I applied for the Citi Simplicity® Card - No Late Fees Ever, which offers an intro 0% on Purchases for 12 months and 0% on Balance Transfers for 21 months, and then the ongoing APR of 14.74% - 24.74% Variable APR. That’s a promotional APR approaching two years, and it would have been a more prudent option than raiding my IRA. But to be honest, while I don’t recommend that approach, it’s hard for me to say I regret it exactly, and it’s here that I want to make a point that tends to go underappreciated or unacknowledged in cases like mine: For someone with little knowledge of or experience with credit cards, opening yet another card when you’re already struggling so mightily can seem daunting and counterintuitive. I was barely treading water back then — scrapping to pay monthly bills — and so wiping out $10,000 in high-interest debt came as a big relief. I can’t say I knew enough about any other options; I can’t say I was ready to juggle another credit account; I can’t say I would have been able to pay off the debt in full, even in two years’ time; and I certainly can’t say I was sorry to see that debt go away. Seventy-year-old me? He may beg to differ.

» MORE: How to choose a balance transfer credit card

Mistake No. 4: I cut up the credit card and stopped using it

It didn’t register as a “mistake” to me at the time — quite the contrary. I was so proud of destroying the card that I joked about it on Facebook:

I wince every time I see that post pop up in my “Memories,” because closing an existing credit account — or allowing it to be closed for lack of use — may not be the best move. By 2012, my Target card had been open for a healthy amount of time. Losing it reduced the average age of my active accounts, which is another factor in credit scores.

I should have kept the account open, although at least now I recognize it as a teachable moment: 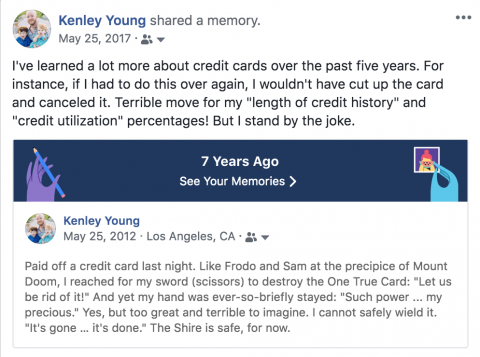 And while I don’t really miss the Target credit card itself, I do kick myself for cutting it up and never looking back. As a father of two young children, I’m much more likely to walk into a Target now than I was in 2005. And a 5% discount on diapers, clothes, toys and snacks? That sure would come in handy right about now.

» MORE: Read some other #CreditCardFails from our experts 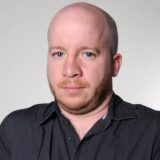