The Blue Cash Preferred® Card from American Express is revamping its rewards structure and its look, making it potentially even more useful as an everyday card — although it may depend on what kind of spender you are.

Starting May 9, 2019, the card will offer the following additional rewards categories — on top of its existing rewards at U.S. supermarkets and U.S. gas stations — with no changes to its $95 annual fee: 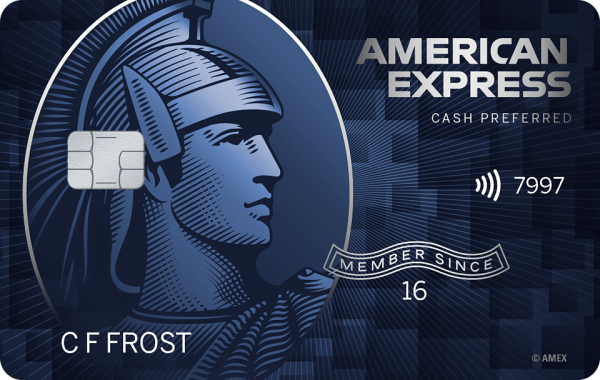 The card is also discontinuing U.S. department stores as a bonus category. (Cardholders acquired before May 9 will continue to earn 3% back in that category until July 31, 2019, AmEx says.)

The revamp will include a new card design, shown in the inset photo. Existing cardholders who want the new look must request it.

AmEx notes that the card, which was launched in 2011, is changing because customers’ everyday spending habits have changed.

“What ‘everyday’ meant in 2011 means something different today,” says Liz Bergman, vice president of U.S. lending products for American Express. “Today the average millennial has three streaming services, and one in five has cut the cord. This is the card for cord-cutters.”

With the revamp, the Blue Cash Preferred® Card from American Express will also feature an increased welcome offer: a $250 statement credit after you spend $1,000 in purchases on your new Card within the first 3 months. Terms Apply. Previously, the offer was $200 for the same amount of spending in the same time frame.

Again, the annual fee is not increasing and will remain $95. The card will continue to earn:

Is this a good deal?

The Blue Cash Preferred® Card from American Express has long been one of NerdWallet’s favorite cash-back cards, as well as a standout in several specific categories, including:

The addition of streaming services and transit as bonus categories further cements the card’s reputation as an excellent pick for everyday household spending — unless, of course, U.S. department store spending is a significant part of your budget.

But if you’re one of the many households with a subscription to Netflix, Hulu or another eligible streaming service, or if a daily commute is a regular part of your life, these changes should come as welcome news, especially since there’s no increase in the annual fee.

“Millennials are growing up, they’re busy, they’re time-strapped, and they’re trying to figure out how to maximize that routine,” Bergman says. “Where they spent five years ago is different than how they’re probably spending today.”

How the card will stack up now vs. others

That card also rewards spending at U.S. supermarkets and U.S. gas stations — though not as handsomely. Transit and streaming aren’t among its bonus categories.

The Blue Cash Preferred® Card from American Express will now more closely resemble the rewards structure of the Wells Fargo Propel American Express® card, which also offers elevated rewards on eligible streaming services, as well as gas stations and transit. Its annual fee is $0, and it’s the better restaurant card, earning triple points on dining in or takeout. Groceries, though, aren’t a bonus category for it.

If you cook at home a lot, the Blue Cash Preferred® Card from American Express is a more rewarding option, despite its annual fee. And its impending rewards rate on eligible streaming services will be best in class.

Robin is a personal finance writer at NerdWallet. Her work has been featured by USA Today, Bankrate, Business Insider, The Seattle Times, The Philadelphia Inquirer, International Business Times and other media outlets. Read more