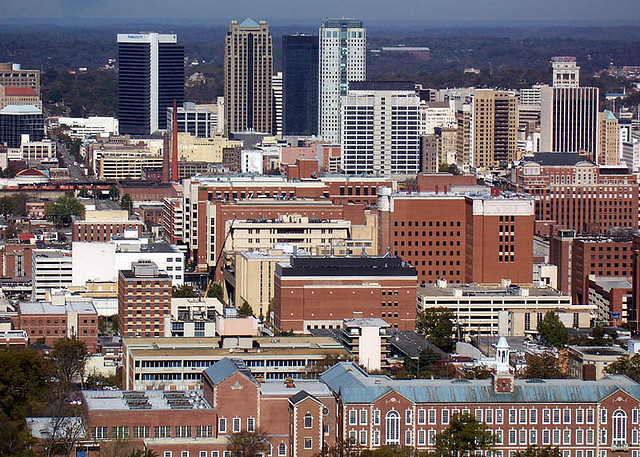 There are many bright spots in Alabama: Analysts expect the state’s economy to grow 2.4% this year, adding about 25,000 new jobs in the fields of manufacturing, business services, health care and social assistance.

In 2013, more people moved to the Cotton State than left, according to a survey by Atlas Van Lines.  Personal income in the state increased 1.8% from 2012 to 2013, to a per capita income of $36,501, according to the Bureau of Economic Analysis.

For homebuyers who need help, many agencies statewide are certified by the U.S. Department of Housing and Urban Development as approved housing counseling agencies.

For more details on our methodology, see the section at the end of this study.

Best Cities for Homeownership in Alabama

From 2010 to 2012, Chelsea’s population grew 10.4% to reach 10,161 residents, a population more than double what it was in 2000, according to census data. Chelsea is in Shelby County, about 20 miles southeast of Birmingham, the largest city in the state. Residents who live near Birmingham have access to job opportunities all over the region. Birmingham is a center for banking, insurance, construction and engineering companies.

This fast-growing suburb of Birmingham had the highest population growth rate on our list. Calera’s population increased by 11.6% from 2010-2012, bringing the city’s population to 11,579 residents at the end of 2012, according to census data. Calera High School was recently named the 15th best high school in Alabama by U.S. News and World Report. Calera is also home to the Shelby County Airport and features weekly summer farmers markets.

Helena, another suburb of Birmingham, boasts the second-highest homeownership rate on our list with 91.7% of homes in Helena occupied by owners rather than renters. Vulcan Materials Co. is one of the city’s largest employers and the company describes itself as the nation’s largest producer of construction aggregates — crushed stone, sand and gravel.

The list of growing Birmingham suburbs includes Trussville, where the median home value is $229,200, the second highest on our list. When it comes to shopping and recreation, Trussville’s residents are served by two large shopping centers built in 2000, and an 120-acre youth sports complex.

Located about 21 miles south of Birmingham on Interstate 65, the city’s population increased by 4.8% from 2010 to 2012. Pelham is nestled in the foothills of Oak Mountain and is close to Oak Mountain State Park. The Pelham Civic Complex features an ice-skating rink, banquet hall and arena.

Many people who live in Moody, where the population grew 5.3% from 2010 to 2012, commute to Birmingham, about 21 miles west. The city was the first in the state to have a Miracle League field, a place where kids and adults with disabilities can play baseball. The league recently celebrated its 10th anniversary. Moody also has a senior center which hosts events and delivers meals to local homebound seniors.

In this city south of Birmingham, homeowners spend just 23.4% of their monthly household income on monthly mortgage and utility costs. Alabaster is home to the Colonial Promenade Alabaster, the largest retail center in Shelby County.

Pleasant Grove, about 10 miles west of Birmingham, has the highest rate of homeownership, 92.2%, on our list. Officials in 2010 unveiled a new Pleasant Grove High School — which is part of the Jefferson County School District, the second-largest school district in the state.

Homes in Madison are valued at $230,500 — the highest median home value on our list. Intergraph, a software company with headquarters in Madison, employs the most Madison residents. Additionally, many residents of this growing suburb of Huntsville in northern Alabama commute to military jobs at Redstone Arsenal, which houses the Army’s center for rocket and missile programs, and science and technology jobs at Cummings Research Park in Huntsville.

At $1,121 a month, homeowners in Leeds pay the second-lowest median monthly homeownership costs on our list. In 2010, The Outlet Shops at Grand River opened in this Birmingham suburb, adding more than 70 stores to the retail roster. Leeds High School has earned a reputation for athletics, with state championships in football and basketball in recent years.

Only places with 10,000 or more residents were included in the study. Cities with higher than average crime were excluded from the top 20 ranking.