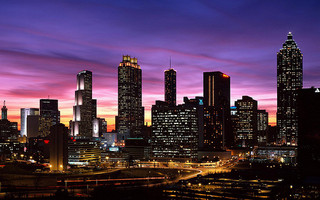 The Peach State is an up-and-coming spot for job seekers. Georgia’s Department of Labor forecasts that the state will be adding 480,690 jobs in the next 10 years, including 120,130 in healthcare and 63,790 in education. NerdWallet crunched the numbers to find the best places for job seekers in Georgia.

The Best Places in Georgia for Job Seekers

Johns Creek, the tenth-largest city in Georgia, is located in Fulton County, northeast of Atlanta. The Chattahoochee River runs along the southern border of the city, and the surrounding Chattahoochee River National Recreation Area provides plenty of outdoor activities for residents in the summer. Johns Creek saw a population growth of 21.9 percent between 2009 and 2011 alone, and households in the city earned a median income of $110,648. The top employers include State Farm, Alcon and Macy’s Systems and Technology. The Johns Creek Economic Development Corporation has recently launched the Johns Creek Advantage program, the first economic development initiative for Johns Creek. It will focus on attracting new businesses, expanding existing local businesses and supporting the entrepreneurs in the city.

Located in Fulton County, Alpharetta is a northern suburb of Atlanta. The city saw 12.8 percent growth in the working-age population between 2009 and 2011, and the median household income is $92,149. Alpharetta is known as the Technology City of the South, with employers like Comcast, Verizon and Hewlett-Packard. Other major employers in Alpharetta include McKesson, Automatic Data Processing and Lexis Nexis. DeVry University has a campus in Alpharetta that offers job seekers help in their Career Resource Center, which offers online technology and business tutorials, a Networking Center and resume writing and interviewing tools. Additionally, Reinhardt University has an adult-education program in Alpharetta that focuses on providing evening classes on an accelerated schedule so everyone can gain the education they need. It offers programs in business, management and healthcare administration, amongst others, and a dedicated Career Services Center to help students and alumni with resume writing, interview practice and networking events.

Located north of Atlanta, Dunwoody is a young city in DeKalb County that incorporated in 2008. The city saw 15.7 percent growth in the working-age population between 2009 and 2011, and the unemployment rate is only 6.4 percent. Principal employers include Six Continents Hotels, Walden Security and ER Solutions. Georgia Perimeter College’s Dunwoody campus has an Advising, Counseling and Retention Services office that helps students obtain the career help they need with sessions on professional presence, job searching and interviewing practices.

Located in the Piedmont region, Peachtree City is the 21st-largest city in Georgia and is situated approximately 30 miles southwest of Atlanta. Peachtree City was founded in 1959 as a planned community with a blend of residential and commercial neighborhoods – it has all the conveniences of a large metropolitan while being surrounded by nature. Households earned a median income of $91,045 while the city’s unemployment rate is a low 6.6 percent. Major employers in the city include NCR Corporation, Cooper Industries and Hoshizaki America. Point University’s Peachtree City Campus is home to the Access Program for adult education; the Access program uses StrengthQuest, Gallup’s strength development program that helps all students build up their core qualities.

Roswell, Georgia’s eight-largest city, is located in the Atlanta metropolitan region, approximately 20 miles north of downtown Atlanta. Between 2009 and 2011, Roswell saw 3.4 percent population growth in the working-age population, and the median household income is $77,173. Principal employers in Roswell include Kimberly-Clark, Verizon and North Fulton Hospital. Roswell’s residents are well-educated – 40.3 percent of the population over 25 have obtained a bachelor’s degree and another 18.8 percent have obtained a graduate or professional degree as well. Roswell has a branch of the Atlanta-Fulton Public Library System, which provides an online LearningExpress Library, which has career and employment resources for job seekers, and Learn4Life, an online continuing education certificate program for professionals.

Warner Robins is located 10 miles south of Macon, in central Georgia. Warner Robins is one of the fastest-growing municipalities in the region, with a 10.2 percent growth in the working population between 2009 and 2011 alone. Warner Robins is home to the Robins Air Force Base, one of the largest employers in the region with 22,911 employees. Other top employers in the region include the Medical Center of Central Georgia, GEICO and Houston Healthcare. The city is home to Houston County Career Academy, which provides courses to prepare students for several career paths, including business technology, engineering and healthcare-science technology. The Robins Region Chamber of Commerce has other online resources for job seekers on their website.

Athens-Clarke is a consolidated city-county in northeastern Georgia and is the fifth-largest city in the state. Athens-Clarke saw 3.1 percent growth in the working-age population between 2009 and 2011. Top employers in the region are the University of Georgia, Athens Regional Health System and Pilgrim’s. The University of Georgia, located in Athens, has a Small Business Development Center designed to help small businesses and their employees exceed. There, businesses can find trained consultants, training courses and other resources. Athens is a bustling hub of culture, as the birthplace of bands such as R.E.M. and the B-52s – Rolling Stone Magazine named Athens the top college music scene in America.

Sandy Springs, the sixth-largest city in Georgia, is located in northern Fulton County, approximately 16 miles north of Atlanta. Sandy Spring’s residents have year-round access to 20 miles of the Chattahoochee River, 11 parks city-wide and a growing downtown. The city saw 10.4 percent growth in the working-age population from 2009 to 2011. Additionally, the unemployment rate is a low 6.7 percent. Top employers in Sandy Springs include Children’s Healthcare of Atlanta, Northside Hospital and IBM. Sandy Springs is home to the North Fulton Service Center, where job seekers can find career counseling services and job search assistance.

Hinesville, the seat of Liberty County, is located in eastern Georgia, approximately 40 miles southwest of Savannah. Hinesville is located approximately 30 miles from the ocean, and residents enjoy moderate weather year-round. It is one of the fastest-growing cities in Georgia – from 2009 to 2011, Hinesville saw 10.9 percent growth in the working-age population. The largest employers in Hinesville include Fort Stewart, SNF, Inc. and Liberty Regional Medical Center. Hinesville Library provides online career assistance for job seekers, including online tutorials of popular programs, job directories and resume builders.

Duluth is located 26 miles northeast of Atlanta, in Gwinnett County. Duluth is home to many cultural attractions such as the Gwinnett Center and the Hudgens Center for the Arts. Duluth saw 2.4 percent growth in the working-age population between 2009 and 2011. Major employers in Gwinnett County are Gwinnett Medical Center, Cisco Systems and Primerica. Duluth is the headquarters of companies like AGCO, the U.S. branch of GravoTech and the North American branch of Merial.

32 communities designated as places by the U.S. Census were included in this analysis. Only places with a population greater than 25,000 were considered.