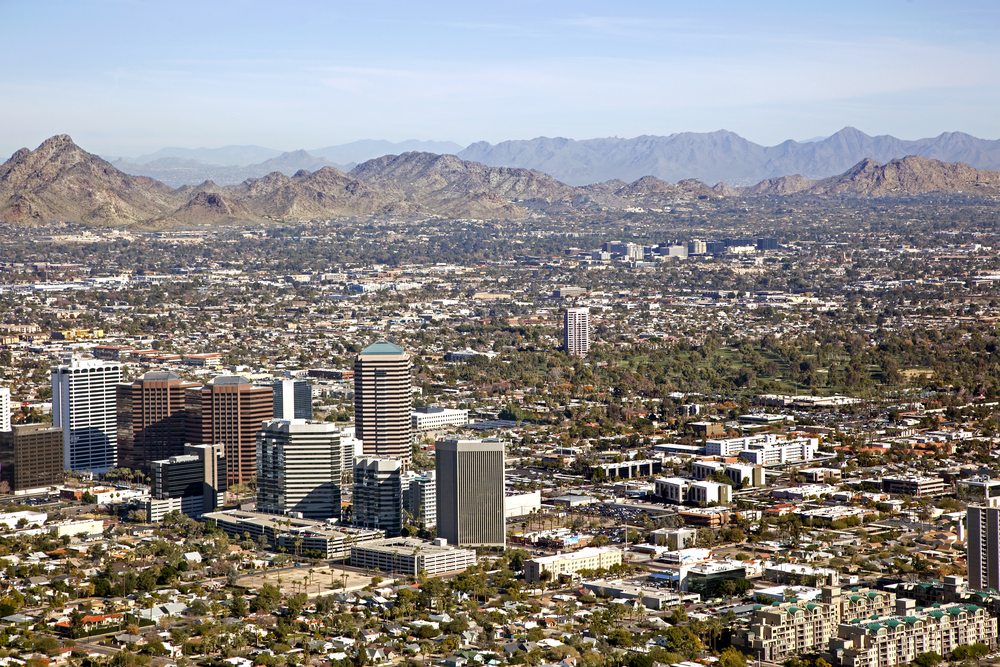 Arizona is bouncing back. Once the symbol of the nation’s housing crisis, the Grand Canyon state is now beating the national average in population growth — 3.7% for the past 31 months versus the U.S. average of 2.4% — and housing permits are expected to double by 2016.

Income and job growth are looking equally positive. According to the University of Arizona’s Economic and Business Research Center, employment increased 2.1% and personal income climbed 2.7% in 2013.

As with most rosy economic news, there is another, less optimistic, side. Arizona still has a long way to go before it replaces all the jobs lost in the Great Recession. A recent report from the W.P. Carey School of Business places blame on an economy centered on construction. It will just take longer to gain all of those jobs back.

To complete the picture, NerdWallet crunched the numbers in Arizona to find the cities “on the rise,” and help residents and newcomers learn about the places that are growing. Our analysis examined the following variables:

In researching Arizona, certain trends became apparent. Here’s what our top places had in common:

NerdWallet crunched the data for 56 communities in Arizona with populations of 4,000 or more. To see full data set, click here.

Florence topped our list for its broad-based strength across a variety of economic indicators. From 2009 to 2012, its working-age population jumped more than 30%, its employment grew 32% and median income rose a healthy 15%. The corrections industry, the leading employer in town, has kept the economy relatively healthy throughout the national downturn. In 2010, Florence began construction on Territory Square, an award-winning project designed to provide economic and engineering opportunities on 623 acres along the Gila River.

Queen Creek, a town outside Phoenix, saw one of the highest three-year income gains on our list at 10.5% as it recorded employment growth of 29.3% compared with the state as a whole. Town officials have identified specific industry clusters, including aerospace and advanced financial services, around which it plans to focus marketing and recruitment efforts. They are already seeing that strategy bear fruit — its Mesa Gateway airport generates more than $251 million a year and is expected to continue with strong future growth.

What isn’t a surprise is this community’s exceptionally strong commercial base and leap in working-age residents — 30% growth from 2009 to 2012. It recently became the U.S. corporate headquarters for Spanish companies Rioglass Solar and Gestamp Solar Steel, which represent a combined $150 million, according to the Greater Phoenix Economic Council. In 2007, the city approved construction of Prasada, a 1,755-acre regional mall to provide a stable tax base for the city for decades to come.

With a working-age population growth of 36% from 2009 to 2012, and covering over 600 square miles, Buckeye is a rising town with a big foundation. The Greater Phoenix Economic Council predicts Buckeye’s population will reach 419,000 by 2030, and it will be part of a regional investment of $35 trillion over the same period. Buckeye has unveiled several master planned communities over the past decade, including at least 21,000 homes at the Sundance and Verrado communities.

Located in Yuma Valley, Somerton is a longtime agricultural town making gains in light industry. Many Somerton residents work in the citrus farming industry, while others work at the Somerton School District and for the city. Residents also find jobs at the Cocopah Nation’s entertainment and cultural attractions, which include a casino, resort and conference center. The city recently developed the Yepco Industrial Park, a 27-acre light industrial zoned site.

It’s all about location in El Mirage. Just 26 miles outside Phoenix, El Mirage is part of the Northern Parkway Transportation corridor project that will connect Loop 303 to Highway 60 and interstates 10 and 17. The city has developed a commerce and industrial park to support a range of businesses from mining and construction to aerospace and high-tech farming. El Mirage saw the third-highest working-age population growth, 34.2%, on our list from 2009 to 2012.

Casa Grande benefits from its location between Tucson and Phoenix and at the intersection of interstates 8 and 10 in “Arizona’s Golden Corridor.” With a working-age population that grew 27% to 36,000 from 2009 to 2012, Casa Grande has one of the largest labor forces in our top 20. Residents in the city saw their median income grow 9.5%, as employment got a 15.6% boost after the construction of a Wal-Mart supermarket and distribution center, which provides over 1,000 jobs.

Like Casa Grande, Eloy is a city in Pinal County that benefits from its location halfway between the state’s major cities. The 44% growth in Eloy’s working-age residents from 2009 to 2012 was the highest on our list. Its population is likely to continue growing — there are plans to add over 175,000 homes in master planned communities in the next decade. The city’s economic development is keeping pace with a dual-track rail system being installed by Union Pacific Railroad.

Even though it has a modest working age population of less than 18,000, Sahuarita isn’t small when it comes to growth. The town saw its employment grow 21.8%, and its working-age population rise 22.9% from 2009 to 2012. According the Sahuarita Economic Commission, the population growth is largely because of three developments with over 17,000 homes. The city plans to sustain its growth by doubling its size through annexations to the east and west.

Coolidge, in Pinal County, recorded balanced growth across the board, with double-digit gains in its working-age population and employment from 2009 to 2012. The city, which is at the crossroads of highways 87 and 287, is focusing on improving shopping options at home. While Coolidge remains the commercial center of the cotton industry in Arizona, the city is branching out to light manufacturing and tourism —over 100,000 people each year visit the city’s Casa Grande Ruins National Monument.

Check out our interactive map for “Cities on the Rise in Arizona”. The darker the color of the point, the higher the growth rate of the working age population. Click on data points for more information.

We evaluated 56 cities and communities in Arizona for this study. Certain places were omitted because of age restrictions for residency.