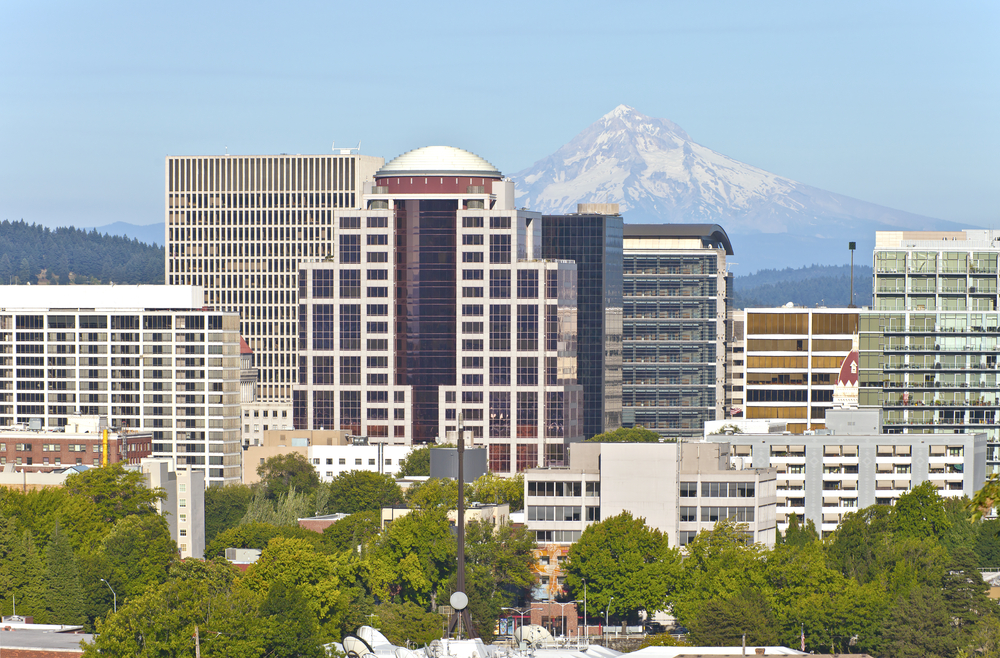 Oregon’s economy has seen its ups and downs.

About two decades ago, the state transitioned from an economy rooted in timber, fishing and agriculture to a mixed manufacturing and market economy. Oregon saw steady growth in the technology sector, driven by companies such as Intel and Tektronix. The state has also had a recent boom in biotechnology and life sciences, with the Oregon Bioscience Association citing $7.1 billion in bioscience development.

But Oregon’s economy was hit hard by the recession as construction jobs disappeared with the end of the housing bubble. Unemployment peaked at 11.6% in May 2009, and remained in double digits through the end of 2010. Recovery has been slow, with a current unemployment rate of 6.8% that outpaces the national average of 6.2%. Oregon still hasn’t seen a return of the manufacturing jobs lost during the recession, and the state’s economic diversity means recovery has been largely uneven.

Still, things are looking up. Four out of five Oregon counties saw job gains in 2013, and Oregon is currently growing 1% faster than the average U.S. state.

NerdWallet crunched the data to provide a more in-depth look at the places in Oregon that are currently “on the rise.” Here’s what we examined:

In researching Oregon, certain trends became apparent. Here’s what our top places had in common:

The Portland area is hot. While Salem and Bend both made appearances on our list, the Portland metro area accounted for five places in our list’s top 10.
The recession is lingering. Even though growth trends are improving in Oregon, the state still hasn’t recovered from the recession. Seven of the top 10 places on our list had negative changes in employment from 2009 to 2012.
The technology industry is spreading. The technology and life sciences businesses that used to be primarily clustered around Portland and Hillsboro now account for job creation in many of the cities on our list.

NerdWallet analyzed 53 cities and communities in Oregon with populations of 10,000 or more. To see a full data set, click here.

Oak Grove is a fast-developing census-designated place outside Portland. It posted a 19.3% growth in its working age population from 2009 to 2012. While it’s primarily a bedroom community, Oak Grove residents enjoy good schools and the outdoors at places Oswego Lake. According to Dick Jones, who sits on the board of the North Clackamas Chamber of Commerce and is a longtime resident of Oak Grove, the community’s growth has been the result of a steady influx of people over the past decade.

Hermiston’s growth is fueled at least in part due to its attractiveness as a regional hub for large corporations. Seed manufacturer DuPont Pioneer added a $35 million research facility 2011, and in 2012, ConAgra Foods Lamb Weston announced a $225 million expansion at the nearby Port of Morrow. FedEx Freight also opened a new $12 million terminal in southern Hermiston in 2011. The city continues to grow, with four new subdivisions under construction.

Redmond is known as “the Hub” of central Oregon’s transportation system, and it also serves as a center for the region’s telecommunications. Diverse local employers, including St. Charles Health Care System, Wal-Mart and the Central Oregon Truck Co., all keep the Redmond economy healthy. Redmond’s low-utility costs and reductions for local enterprises attract businesses to the area, while affordable housing brings in workers. Although housing construction slowed during the recession, Redmond approved over 2,000 new units from 2004 to 2007, and saw its working-age population grow 11.9% from 2009 to 2012.

Lebanon is a city that prides itself on its economic diversity. According to Community Development Manager Walt Wendolowski, Lebanon’s employment “extends from blue collar construction all the way through the life sciences.” Major employers in the city range from ENTEK, a manufacturing company, and Samaritan Community Hospital to the Lowe’s Regional Distribution Center. Anticipating future growth, Lebanon set aside a “Biosciences & Technology Overlay Zone,” 50 acres of fully serviced land reserved for the bioscience industry. The city has the added draw of being the home of the Medical College of the Western University of Health Sciences and the Linn Benton Community College.

The industry in Corvallis centers around two powerhouses: Oregon State University and Hewlett-Packard. The university, which employs over 12,000 people, has recently expanded its student body by 1,000, which accounts for part of the 8.2% working-age population growth in our study. Corvallis weathered the recession better than most cities in Oregon, largely because of steady employment at the university. HP, which employs 1,500 in Corvallis, has also been a mainstay since the 1990s.

Sherwood is a small city in Oregon’s prosperous Washington County. The area has seen its population grow as more residents seek Sherwood’s small-town feel, and close proximity to the county’s business hubs. Sherwood is about 17 miles from Portland, and even closer to Beaverton and Hillsboro, the homes of Nike and Intel. Construction slowed during the recession, but the town announced the opening of 100 housing units last year at Cannery Row. Sherwood plans to continue its growth over the next decade, as it looks to annex the 260-acre Brookman area for residential development.

Business planners in Pendleton understand it’s all about location. The city lies right on I-82 en route to a crucial juncture in Hermiston, where I-84 splits into I-82, which means Pendleton sees all the trucking traffic going from Salt Lake City to Portland and Seattle. The city’s economic expansion helped it record a 5.7% increase in employment from 2009 to 2012 — the highest in the state — and a 2% bump in median income over the same period. The city is incentivizing future growth with a three-year property tax exemption for qualified businesses, and in 2007, it set aside 527 acres for industrial parks.

Damascus’ economy is changing. Historically an agricultural town, the biggest growth in employment in Damascus in the past decade has been in professional and business services, now the largest industry segment. The city also anticipates its strong retail sector will continue to grow along with the city’s population. The city, about 20 miles from Portland, saw one of the highest working-age growth rates in the state at 12.7% from 2009 to 2012.

This one should come as no surprise. While the state’s largest city is well known for its eco-friendly culture and a plethora of microbreweries, Portland has also gained recognition for the influx of technology businesses to the area. The greater Portland area has earned the moniker “Silicon Forest” for the array of tech companies, including Integra Telecommunications, Triquint Semiconductor, a communication chip manufacturer, and Radisys, a producer of electronic components. While unemployment remains slightly high after the recession, Portland is likely to continue growing strong. Organizations such as the Portland Development Commission are working to keep innovation and entrepreneurship alive in a city that saw its working-age population increase 7.6% from 2009 to 2012.

Nestled between Hillsboro and Portland, the census-designated place of Aloha is a commuter destination. The working-age population grew 9.5% from 2009 to 2012, and is considered by many residents to be one of the few remaining “affordable yet desirable housing markets left in the Portland metro area.” The community’s lure is enhanced by two highly-ranked school districts: Beaverton and Hillsboro. The city has benefitted from Washington County’s recent growth and had a three-year median income growth of 2.8%.

Check out our interactive map for Cities on the Rise in Oregon. The darker the color of the point, the higher the growth rate of the working-age population. Click on data points for more information.

We evaluated 53 cities and communities in Oregon for this study.

Cities on the Rise in Oregon (Full Rankings)