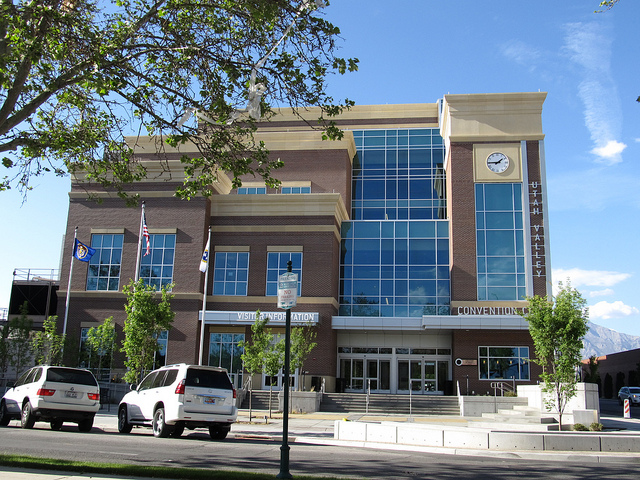 Utah is growing fast: the state’s population has doubled in the past 30 years, and planners expect the state will add another 2.5 million people by 2050. The fastest-growing areas are concentrated in the 90-mile stretch along Interstate 15 from Ogden to Provo, where new residents and businesses are arriving at some of the fastest rates in the country.

Two cities in this region, Lehi and South Jordan, are among the 10 fastest-growing cities in the nation, according to the U.S. Census Bureau. The statewide growth is coming from migration and high birth rates, according to state demographers.

NerdWallet crunched the numbers for the 33 cities in Utah with more than 20,000 residents to find the cities experiencing growth in jobs, income and population. Our analysis examines the following growth metrics from census data:

Top 10 Utah Cities on the Rise

Located southeast of downtown Salt Lake City, Holladay, an affluent suburb, saw the median income for full-time workers increase 31.5%, the highest percentage increase on our list, from $40,640 in 2009 to $53,444 by 2012. New businesses are opening in Holladay, including retail and restaurants at the new Holladay Village Square development. This year, more than a dozen new business licenses have been filed each month, according to city records. The city also won a special endorsement last year when former Republican presidential candidate Mitt Romney and his family bought two homes in Holladay.

Provo, the home of Brigham Young University, is a destination for creative entrepreneurs. Income for full-time, nonseasonal workers increased 12.3% to $33,762 in 2012, up from $30,069 in 2009. The city supports local businesses through grants to small downtown stores for façades, new signs and sidewalk restorations. In the past couple of years, Provo welcomed the Utah Valley Convention Center, a $42 million facility that helps bring in revenue to local businesses. Much of the community’s business activity begins at Brigham Young University’s Marriott School of Business, where its Rollins Center for Entrepreneurship and Technology has produced dozens of successful startups and helped students secure $500,000 in startup funding last year.

The city, located between Ogden to the north and Salt Lake City to the south, saw growth in population, incomes and jobs from 2009 to 2012. Anchored by the city’s Freeport Center, Clearfield is a hub for manufacturing, warehousing and distribution for food, lifestyle and materials companies. The Freeport Center is home to 70 companies and more than 7,000 employees. Clearfield has committed to sustainable growth and attracting more businesses to the city by expanding the Freeport Center, creating a pedestrian friendly downtown and building new developments around the commuter rail station. The city is also marketing its proximity to Hill Air Force Base to attract aerospace companies to the area.

Riverton is getting to work: the number of residents in the workforce grew 5.9% from 2009 to 2012, the largest percentage increase on our list. New retail and housing developments planned over the next few years are expected to revitalize downtown Riverton. The city’s largest employers are the Church of Jesus Christ of Latter-day Saints, Jordan School District and Riverton Hospital.

Roy, which is north of Clearfield and south of Ogden, saw a 5.4% population increase, and an 8.3% increase in median income for full-time, nonseasonal workers from 2009 to 2012. The city borders Hill Air Force Base and is considered one of the most affordable places in Utah to own a home, according to the Ogden Weber Chamber of Commerce. Notably, of the more than 2,300 businesses in Roy, women own 35.1% of those businesses, according to census data.

Located about 80 miles south of Roy, Springville’s working-age population expanded 9.2% from 2009 to 2012, and its median income for full-time, nonseasonal workers increased 6% during the same time. Springville is a young city with a median age of 25.9 years old while the state’s median age is 29.6 years old, according to census data. The self-described “arts city” features museums and annual festivals celebrating local artists.

Lehi, north of Springville on Interstate 15, was the fifth-fastest growing U.S. city from July 2012 to July 2013, according to census data. From 2009 to 2012, the city’s working-age population grew 7.8%, and its median income for full-time workers grew 16.6%. People are coming to Lehi for lucrative job opportunities at Microsoft, Adobe, Intel and Micron and the other large technology companies that have given the area the nickname “Silicon Slopes.” City administrators want that growth to continue, and Lehi City Administrator Derek Todd said in April 2013 that the city was “only 36% built out,” and was committed to bringing in more companies and new residents.

The city between Clearfield and Roy saw the median income for full-time, nonseasonal workers increase 7.2% to $46,893 in 2012. As part of the Ogden metro area, jobs are plentiful at companies such as Northrop Grumman and Esurance. Clinton is also moving ahead with major traffic projects to better accommodate new businesses and residents in the city. The working-age population increased 2.9% from 2009 to 2012 in Clinton.

Spanish Fork’s working-age population grew the fastest of any city in our top 10, increasing 15.5% from 2009 to 2012 to reach 22,620 residents ages 16-64. Spanish Fork lives up to Utah’s friendly reputation: the Spanish Fork/Salem Area Chamber of Commerce and local youth groups present each new business and new resident with a welcome bag of special deals and informational materials about the community. Spanish Fork also made NerdWallet’s list of best places for job seekers in Utah.

To view the full ranking of all 33 cities evaluated for this study and to download the data, click here.