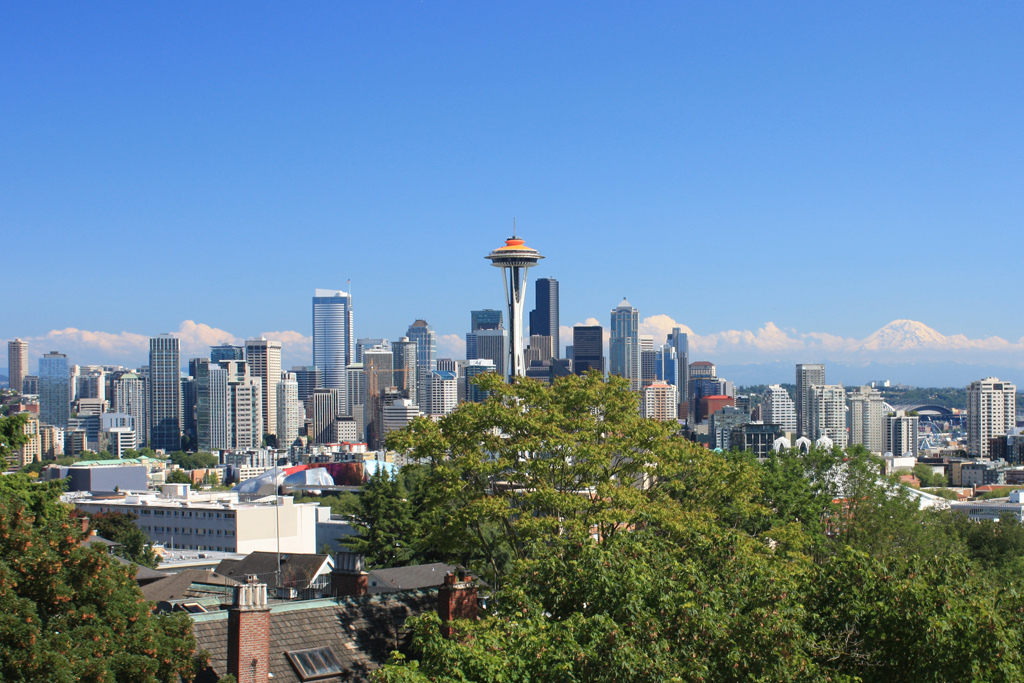 In jobs, population and income, Washington is on the upswing. Washington’s per capita personal income ranked 13th in the nation in 2013, and income growth between 2012 and 2013 was the 8th highest in the country, according to the Bureau of Economic Analysis.

The growth isn’t centered just in Seattle, the state’s largest city. The southeast part of the state, near Oregon’s and Idaho’s borders, saw tremendous population and economic growth from 2009 to 2012. The Tri-Cities region was the fastest-growing area in the country from 2010 to 2011, according to U.S. Census Bureau data.

Jobs are on the rise, too: State economists forecast that employment in Washington will grow about 1.8% a year through 2017. Careers in precision manufacturing, technology and scientific research defined the job markets in most of our featured cities.

NerdWallet crunched the numbers to find the cities in Washington with more than 20,000 residents demonstrating growth in jobs, income and population. Here’s what the top 10 cities had in common:

Our analysis examines the following growth metrics from census data:

Top 10 Cities on the Rise in Washington

Large gains in population and income earned Richland the top spot on our list. But it’s not only the fastest-growing city in the state, Richland — along with its sister cities of Pasco and Kennewick — was also part of the fastest-growing metro area in the nation from 2010 to 2011, according to census data. People flock to the Tri-Cities for jobs with the U.S. Department of Energy’s Pacific Northwest National Laboratory and other companies cleaning up radioactive materials at the Hanford Nuclear Reservation, where scientists made plutonium for the bomb that ended World War II. Later, workers helped produce nuclear weapons during the Cold War. Years of nuclear waste clean up has sent billions in federal dollars and top scientists flowing into Richland, where 42.2% of residents have a bachelor’s degree or higher compared with the statewide average of 31.6%, according to census data. Residents can join the ranks of the highly educated by taking classes at Washington State University Tri-Cities, which offers science-heavy coursework along with liberal arts degrees.

Bellingham’s 25% increase in personal income launched this northwest Washington community toward the top of our list. The median earnings for workers rose from $17,018 in 2009 to $21,271 in 2012, an increase of more than $4,000 in just two years. While median earnings for workers in Bellingham are still lower than the state average of $32,111, the median in Bellingham increased while the statewide average decreased from 2009 to 2012, according to census figures. The largest industries in Bellingham are education, social services and health care, which made up more than 20% of the jobs in town, according to census data. The city’s largest employers include Western Washington University, St. Joseph Hospital and the Bellingham School District. Bellingham is also encouraging growth in small businesses through the university’s Small Business Development Center and the startup incubator at the Big Idea Lab, a shared space for workers and a hub for local technology companies.

This central Washington city saw its population increase 10.4% between 2009 and 2012, and incomes rise 15.7% during the same period. The area has agricultural roots and ample supplies of hydroelectric power, thanks to its location in the Columbia River Basin. This power source has fueled industrial growth in the area, and it was a key factor in BMW’s decision to build a carbon fiber plant in Moses Lake to produce panels for the company’s i3 electric car. Manufacturing companies now provide most of the jobs in the area and more companies, like Aviation Technical Services, which expanded to Moses Lake last year, are moving to the city.

It was a 12.6% increase in population from 2009 to 2012 that earned Bremerton the No. 4 spot on our list. The city, located on the Kitsap Peninsula, and west across Puget Sound and downtown Seattle, saw jobs grow 4.6% in the same period. One of the largest employers in the area is the Navy, which operates Naval Base Kitsap and the Puget Sound Naval Shipyard. Nearly 30% of residents work for the government, according to census data. Residents can also find jobs in downtown Seattle and commute via the Washington state ferry system. City planners anticipate more commuters will continue to move to Bremerton and commute to Seattle to the east, or south to Tacoma.

This Eastern Washington city’s 12.5% population growth from 2009 to 2012 earned it a spot on our list. The college town, located less than 10 miles from Idaho’s border and the University of Idaho, is home to Washington State University, which had a student enrollment of nearly 20,000 in fall 2013. Students made up nearly half of the population, and the university is the largest employer in this city where 45.5% of residents work for the government, according to census data. Agriculture is another major economic engine in Pullman, which is located in the Palouse region that is known for its rich soil that produces large crops of lentils, chickpeas and dry peas. Manufacturing and technology companies are also setting up shop, including Schweitzer Engineering Labs, which was founded by a Washington State University Ph.D. graduate.

This city, located north of Seattle, saw median earnings for workers rise almost $4,000 between 2009 and 2012, making it one of the fastest-growing cities in the state in terms of income. The median income for workers in Mountlake Terrace was $36,532 a year in 2012, higher than the statewide median of $32,111 a year, according to census data. The city is also seeing a wider economic recovery, and in 2013, sales taxes brought over $2 million, the highest ever for the city. Officials attribute the growth to new construction, such as the Arbor Village apartments and storefronts, and Diamond Knot Brewing’s new restaurant in town. For the future, the city is focusing on revitalizing its downtown Main Street by building condominiums, upgrading sidewalks and utilities and focusing on transit-oriented development. The city estimates the project will create 1,400 new jobs.

Continuing a decade of growth, Issaquah’s working-age population grew 35% from 2009 to 2012, to 25,294, according to census data. Issaquah has been growing quickly since 2000, when the city had just over 11,000 residents. Through a series of annexations and housing expansions, this suburban community, about 17 miles east of Seattle, more than doubled in size. In response to the growth, the city has taken steps to limit its carbon footprint by opening an office of sustainability. The office, housed within city government, is responsible for green building, sustainability, urban agriculture and energy use, as well as keeping the city on track for meeting its sustainability goals, such as promoting dense, walkable developments and preserving open space.

It was Redmond’s population and income growth that earned it a spot on our list. This city, northeast of Seattle, is the corporate home of Microsoft, and just as the company’s fortunes have grown since the opening their headquarters in 1986, the community also has expanded. Along with Microsoft, technology companies in Redmond include Nintendo of America’s corporate headquarters and AT&T offices. The city is also the state’s designated Interactive Media and Digital Arts Innovation Partnership Zone, an economic development initiative to support entrepreneurial development in these fields.

Renton’s massive 52.7% population increase from 2009 to 2012 put it on our list. The city is home to a Boeing commercial airlines facility, where workers build Next-Generation 737s. Renton is close to Seattle — just 12 miles south of downtown — and the more affordable home prices have made it a destination for people looking for a suburban lifestyle with shorter commutes to the city. City planners predict Renton’s fortunes will continue to grow as new housing and new retail options, plus growth at Boeing, are projected to add another 5,000 jobs and 8,800 new residents by 2016.

A mix of population and income growth earned Sammamish, which is south of Redmond and north of Issaquah, a spot on our list. The city of Sammamish has officially been in existence only since 1999, but this former logging town quickly has become a coveted suburban Seattle spot. The city’s working-age population increased 14.7% from 2009 to 2012, and it reached 34,258 by the end of 2012. Median earnings for Sammamish residents were more than double the statewide median, clocking in at $75,644 in 2012. In their plans for the future, city officials recently updated the Sammamish Comprehensive Plan 2035 to include an outline for environmental and economic sustainability, the development of a town center and preservation of the city’s environmentally critical areas.

3. Income growth from 2009 to 2012 made up 33.3% of the total score. Data for the median earnings for workers comes from the 2009 and 2012 U.S. Census American Community Survey 3-year estimates for all places in the state, Table CP03. Earnings include full, part time and seasonal workers.

We evaluated the 53 cities, towns and census-designated places (CDPs) in Washington with more than 20,000 residents for this study. Marysville was excluded from the top 10 ranking for inconsistent municipal boundaries between 2009 and 2012.

For the full ranking of all 53 cities, click here.