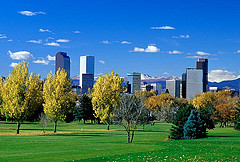 Is the city growing? We assessed growth in the working age population, ages 16 and older, from 2009 to 2011 to ensure that the city was attracting workers and exhibiting a trend of upward population growth.

Can you afford to live there comfortably? We measured a city’s median household income to see if workers made a good living. We also analyzed the monthly homeowner costs, including mortgage payments, to see if the city had a reasonable cost of living.

Are most people employed? We looked at the unemployment rate.

The Best Places in Colorado for Job Seekers

Castle Rock is located in Douglas County, in central Colorado, approximately 30 miles south of downtown Denver and 40 miles north of Colorado Springs. The city is situated along the Front Range of the Rocky Mountains and has mild temperatures year-round. Castle Rock saw an impressive 10.7 percent increase in the working-age population between 2009 and 2011, and the town’s unemployment rate is a low 5.3 percent. Top employers in town include Castle Rock Nursing & Rehabilitation, Brookside Inn and AluWind. One program in town, Castle Rock Economic Gardeners, works to provide local small businesses and start-ups with expert business resources such as experienced mentors, group training sessions and workshops for all employees and the latest business research.

Located along the Cache La Poudre River in northern Colorado, Fort Collins is the seat of Larimer County and the fourth-most populous city in Colorado. Fort Collins saw 5.1 percent growth in the working-age population, and its unemployment rate is a low 5.2 percent. Top employers in Fort Collins include Colorado State University, Poudre Valley Health System and Hewlett-Packard. Colorado State University and the City of Fort Collins are funding partner of the Rocky Mountain Innosphere, a non-profit incubator for scientific and technology start-ups – they are currently incubating 39 entrepreneurial companies and providing access to academic and government institutions as well as educational and networking opportunities.

Loveland is located 13 miles south of Fort Collins, in Larimer County. The Sweetheart City is known for its love of art — there are over 200 sculptures throughout the city and three major annual art shows. Loveland saw 4.8 percent growth in the working-age population between 2009 and 2011, and its unemployment rate is 6.0 percent. The city’s top employers include Lutheran Health Network, Hach Company and LPR Construction. Larimer County Workforce Center provides job seekers with access to networking opportunities, job postings and job training workshops. Young professionals in northern Colorado can find professional development service at Stir Loveland, hosted by the Loveland Chamber of Commerce. The local Aims Community College has a special Continuing Education program that provides corporate education for community members. There are enrichment courses, job-training certifications and other workforce tools.

Situated in Arapahoe County, Centennial is approximately 13 miles southeast of Denver. Centennial is a young town — it was established in 2001. Since then, the city has been on the rise. From 2009 to 2011, Centennial’s working-age population grew 2.6 percent. Additionally, households in the city earned a median household income of $88,474. Centennial’s top employers include Comcast, Oppenheimer & Co. and United Launch Alliance. Arapahoe/Douglas Works! Workforce Center provides job seekers in Arapahoe and Douglas Counties workshops for job searching, one-on-one counseling and job training programs.

Broomfield is a part of the Denver metropolitan area, approximately 18 miles northwest of Denver and 13 miles southeast of Boulder. Broomfield is surrounded by Pikes Peak to the south, Mount Evans to the west, Longs Peak in the northwest and the plains in the east, and the city itself is located over one mile high, at 5,344 feet above sea level. Broomfield’s households earned a median income of $76,531 while the city’s unemployment rate has remained low at 6 percent. Top employers included Level 3 Communications, Oracle and Ball Corporation. The Broomfield Workforce Center offers job postings, workshops on job searching and special employment services for veterans.

Located 20 miles southeast of Denver, Parker is a highly educated community — 33.2 percent of all residents have received a bachelor’s degree and 14.3 percent have received a master’s degree or higher. Parker’s households earned a median income of $92,917, and the town’s unemployment rate is a low 6.2 percent. Major employers in Parker include OraLabs, Rocky Vista University and Parker Adventist Hospital. Arapahoe Community College has a campus in Parker that offers Community Education in both academic and business-oriented courses. Residents can find courses in personal development, technology and finance.

Thornton is located 10 miles northeast of Denver and is one of the fastest growing cities in Colorado. The city offers easy access to the Rocky Mountains’ numerous recreational areas for activities such as skiing, hiking, rafting and camping. The city saw 3.6 percent growth in the working-age population between 2009 and 2011, and its households earn a median income of $66,827. Thornton’s top employers include DISH Network, North Suburban Medical Center and SunGard Availability Services. Everest College is a career-oriented school that has a campus in Thornton. All its instructors have had previous professional experience in their fields, and all graduates work with the Career Placement Services staff to find a job.

Northglenn is located seven miles north of Denver, bordered by the Rocky Mountains to the west. The city boasts 300 days of sunshine per year and is connected to the Greenway Trail System, 28 miles of walking and biking paths in the Denver metropolitan area. Northglenn saw 4.9 percent growth in its working-age population from 2009 to 2011 and is a fast-growing community in Colorado. Major employers in Northglenn include Ramada Plaza, O’Meara Ford and Lowe’s. Metro Denver Economic Development Corporation offers job seekers a full list of online resources to find positions in the Denver metropolitan region, including Northglenn.

Located in Boulder County, approximately 16 miles northeast of Boulder, Longmont is a great community for outdoor lovers, with easy access to the Rocky Mountains and 1,500 acres of parkland. Longmont’s households earn a median income of $56,278, and the city’s unemployment rate is a low 5.6 percent. Top employers in the city include Longmont United Hospital, Seagate Technology and Intrado. Workforce Boulder County is a part of the Colorado Workforce Center program that focuses on providing job seekers with a Computer Resource Center, career information and personalized counseling. Additionally, the Longmont Entrepreneurial Center is a not-for-profit organization that supports local entrepreneurship. Experienced advisors volunteer their time to foster small businesses into sustainable enterprises that create jobs.

The Best Places in Colorado for Job Seekers

This analysis examined 26 communities. Only places with working-age populations over 20,000 were considered.