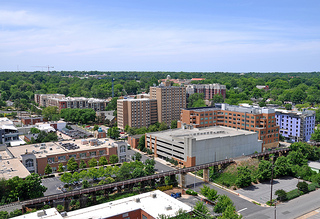 The economies of North Carolina’s metropolitans are on the rise. The Charlotte metropolitan area’s economy grew nearly 5 percent in 2012 while both Raleigh and Greensboro’s economies grew more than 2 percent. To find the places in North Carolina with the most promising economic prospects, NerdWallet crunched the numbers.

NerdWallet analyzed the best cities for job seekers by asking the following questions:

The Best Places in North Carolina for Job Seekers

Located 15 miles southeast of Charlotte, Indian Trail is one of the fastest growing areas in North Carolina, with a 44.2 percent population growth between 2009 and 2012. Households in Indian Trail earn a median income of $63,619, and the unemployment rate in the town is a low 5.4 percent. Indian Trail’s government is working hard to accommodate this high growth by adopting a new Unified Development Ordinance to implement a plan for a revitalized downtown area. Many residents of Indian Trail work in the Charlotte area, with top employers such as the Carolinas Healthcare System and the Wells Fargo Company. Radiator Specialty Company is headquartered in Charlotte and operates a manufacturing plant in Indian Trail.

Located in Wake County in central North Carolina, Holly Springs saw a 19.0 percent population growth between 2009 and 2012. Its median household income is a high $89,421 while the median monthly homeowner costs are only $1,665. Holly Springs is part of the Research Triangle, which is home to top health and life science employers such as Rex Healthcare, GlaxoSmithKline and WakeMed Health & Hospitals. Principal employers in Holly Springs include the Wake County Public School System, Town of Holly Springs and Novartis Vaccines and Diagnostics. The Council for Entrepreneurial Development provides mentorship, information and capital to companies in North Carolina and the Research Triangle.

Wake Forest is located just north of Raleigh in the northeastern region of North Carolina. Residents enjoy Wake Forest for its 220 sunny days per year, mild winters and warm summers – perfect for going boating in Falls Lake. The town saw a 15.2 percent population growth between 2009 and 2012, and the unemployment rate is a low 5.0 percent. Wake Forest’s top employers include the Wake County Public School System, Southeastern Baptist Theological Seminary and CenturyLink. Wake Forest is a hub of technology – it is home to the Wireless Research Center of North Carolina, a non-profit research organization that serves as a center of innovation for wireless and antenna technology. Additionally, Wake Forest Economic Development’s Business Expansion and Retention Program helps businesses obtain local, state and private resources to grow; they even help businesses find and train new employees.

Greensboro saw a high population growth of 39.7 percent between 2009 and 2012 and is now the third most populous city in North Carolina. Top employers in Greensboro include Cone Health, the University of North Carolina at Greensboro and High Point Regional Health System. The Greensboro Partnership Entrepreneurship Initiative equips businesses with the right resources to grow, from providing business education to locating investors. The University of North Carolina at Greensboro focuses on developing the local business community through the Center for Business and Economic Research, which uses high-quality research to assist the economic development of the region, and via the North Carolina Entrepreneurship Center, which offers entrepreneurial mentoring and consulting opportunities.

Situated 30 miles north of Charlotte, Mooresville saw a huge population growth of 33.8 percent from 2009 to 2012. Race City USA is known for its NASCAR teams as well as its racing technology. Top employers in the racing industry are NGK Automotive Ceramics U.S.A., Roush Yates Racing Engines and Penske Racing, and other top employers in the town include Lowe’s Companies, Lake Norman Regional Medical Center and the Mooresville Graded School District. The local Centralina Workforce Development Board supports the Centralina region, including Mooresville, with workforce training and funding – job seekers can find training courses, networking events and local career centers.

Located in Wake County in central North Carolina, Cary is part of the Research Triangle. Cary’s workforce is well-educated, with 61 percent holding a bachelor’s degree or higher, and the median household income is high, at $91,997. There are many technology and life science companies in Cary, and principal employers include SAS Institute, Verizon Communications and WakeMed Health & Hospitals. Cary’s Chamber of Commerce has helped the economic development of the town by helping companies relocate and expand.

Concord, located in Cabarrus County, is a fast-growing city approximately 20 miles northeast of Charlotte. While its population grew 18.0 percent between 2009 and 2012, Concord’s unemployment rate has remained low, at only 6.5 percent. The top employers in Cabarrus County include the Carolinas Medical Center, Cabarrus County Schools and Connextions. The Rowan-Cabarrus Community College offers a Small Business Center to help local businesses expand through business courses, classes and seminars on everything from developing business plans to maximizing profits. Additionally, small business owners should sign-up for the Center’s free one-on-one consultations with an experienced counselor who provides industry and financial analysis.

Cornelius is part of the Lake Norman region, around 20 miles north of Charlotte. Cornelius’s median household income is $79,572, and the town’s unemployment rate is only 5.6 percent. Major employers in the Lake Norman region include Charlotte-Mecklenburg Schools, Michael Waltrip Racing and the Curtis Screw Company. Nearby Davidson College encourages local entrepreneurs, students and alumni to launch and expand sustainable ventures through the Entrepreneurship Initiative. The program hosts a special Davidson College Venture Lab, a two-month full-time, immersive model that provides entrepreneurs with mentors, education and networking opportunities in a close-knit community.

Located in the Research Triangle, Apex is a part of the Raleigh-Durham-Chapel Hill metropolitan area, around 7 miles southwest of Cary. Apex boasts a high median household income of $86,782 and a low unemployment rate of 5.5 percent. The town’s principal employers include Wake County Public School System, Cooper Industries and EMC Corporation. Small businesses looking to grow can find help from the Small Business and Technology Development Center, a University of North Carolina system program. Job seekers can also find job listings, networking events and industry news from Work in the Triangle.

46 communities designated as places by the U.S. Census were included in this analysis. Only places with a population greater than 25,000 were considered.