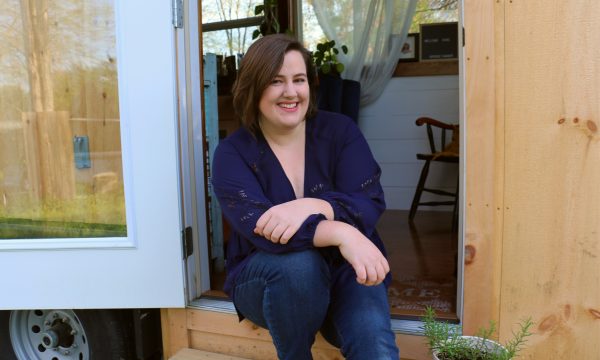 In this series, NerdWallet interviews new homeowners across the country about their unique homebuying journeys and the financial decisions that helped them along the way. Email [email protected] to share your first-time homebuying story.

HGTV shows have popularized tiny homes — typically those smaller than 400 square feet — in a big way. Many people are drawn to this alternative path to homeownership as a way to save before committing to a more expensive piece of property.

However, getting a tiny home diverges from the typical homebuying process in several ways (e.g., you’re unlikely to find a real estate agent who can show you a dozen options). The process can be complex logistically and financially, so it’s important to know what you’re signing up for.

Annie Colpitts, a 30-year-old marketing coordinator, has spent more than a year in an 8 1/2-by-20-foot home that she designed and helped build. She lives 20 minutes north of Richmond, Virginia, and parks the home on a small piece of private property that she rents for $350 a month. Colpitts left a spacious downtown apartment — and paused plans to buy a conventional home — to embrace this new way of living.

To learn more, we asked Colpitts to share why she chose a tiny home, how she financed it and what she would have done differently. (This transcript was lightly edited for clarity and length.)

Why did you become interested in a tiny home? 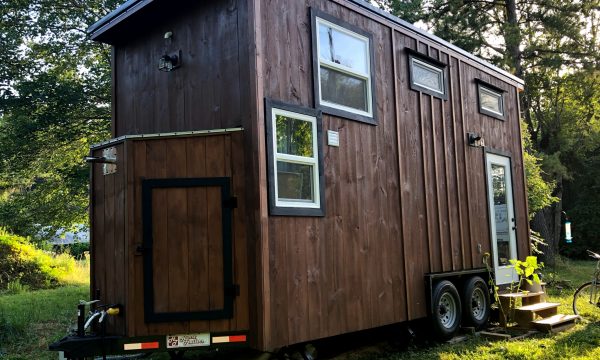 I had been thinking about buying a house in Richmond, but one friend had a really terrible homebuying experience involving major hidden issues, like mold and termite damage, which made me reconsider. The scale of a tiny house seemed so much more manageable to me.

I was also following “van life” on social media for a while and connected with the idea of tiny living. I was already living pretty minimalistically. As much as I loved the idea of living in a van on the road, I work a job that doesn’t accommodate a nomadic lifestyle, and downsizing to a fully mobile situation seemed unnecessary for my circumstances.

I had always rented and bounced around a couple of different places in Richmond ever since I graduated from college. My last apartment was in the heart of downtown, and it was a pretty swanky one-bedroom with plenty of space for me [roughly around 700 square feet]. It was also cheap [$750 a month, excluding electricity and internet]. I didn’t really have a reason to leave that living situation except that it felt like I was renting space that wasn’t mine, and I wanted a space of my own that I could modify if I wanted to. Also, as part of my job, I had worked with architects for the last five years, and being around them inspired me to create a home.

Can you describe the process and timeline?

The whole process took about a year. I first had the idea in November of 2017. I knew I wanted to come up with my own floor plan and design it myself, so I spent the first few months researching floor plans. About six months into the process, around May 2018, I contacted the bank for a loan. I moved into the home in December 2018.

Why did you decide to build your home? 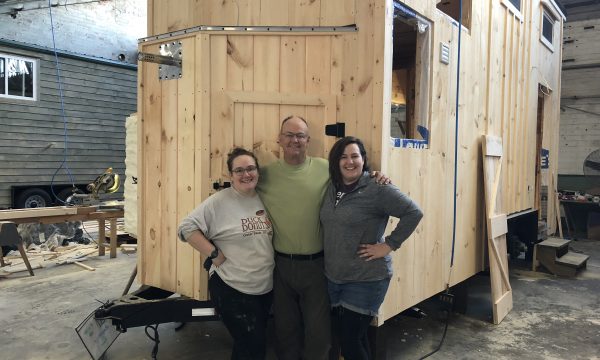 Colpitts’ father and sister came out to Tennessee with her for a week to help build the home.

A lot of people will piecemeal design a tiny home in their backyard or buy from builders who do everything from beginning to end, but my finances weren’t set up to support that. I needed to swap my rent payments for loan payments pretty immediately. I found a builder that offered a more affordable process — which they don’t do anymore — by taking my floor plan and letting me build parts of the home. They handled things like ordering windows and setting up electrical and plumbing and then let me do some of the more labor-intensive, less-skilled work.

During that “build week,” my dad and sister went out with me to their facility in Tennessee. We worked 10-hour days for six days straight on siding, interior paneling and more. The final home was delivered to me two months later. Because of this process, I feel like I have a better understanding of my house in general.

What’s your overall approach to finance?

I became a minimalist by circumstance and not by choice. For a long time, I was in the nonprofit world, so I was working long hours and barely getting paid. I’m grateful to be in a job now where the amount of money I make is not an issue, but I continue to only buy what I need. I am very grateful that I haven’t had student loans — my parents set up a college fund for me — and I decided not to do a postgrad degree.

How did you finance the tiny home?

This is notoriously one of the hardest parts of the process. Tiny houses were created to live in the gray area between mobile homes and actual houses, which makes funding them hard. Inspection processes for tiny homes are still so new compared to mobile and traditional homes, so lenders can be hesitant to provide funding for a home that is unsafe or one that can fall apart.

My initial all-in budget was $35,000. I went the tiny home loan route and got one for $28,000, which covered about 80% of the building costs. I wanted to build the tiny home imminently but didn’t have upfront cash savings to do so. My family has a great relationship with a local bank we’ve used for the past 30 years. The bank had not done tiny home loans before, but they knew it was becoming more of a thing and were open to trying it with me. We did an unsecured consumer loan and my parents were co-signers. I am probably paying slightly more in interest than if I had gone with a secured loan or mortgage, but I didn’t have to jump through hoops to get the loan because there was already trust on both sides.

To save up for the rest, I did a lot of dog walking, house sitting, took as many temp agency postings as I could and sold stuff. I also did a lot of the side hustle apps — ridesharing, food delivery, etc. — and saved aggressively from my normal job.

How far along are you in paying back the loan?

I am around one-third of the way through paying back the loan. I had hoped to pay it off more aggressively, but last year I was underemployed. I had a steady job, but they had dialed down my hours so I did some side hustle work to pay my bills. I was breaking even every month and didn’t have a whole lot of extra money to pay down more than the principal. But now that I started a new job this year, I would like to pay it off sometime in 2021. The deadline to pay it all off is 2024, but the sooner, the better.

Were there any surprises? Would you have done anything differently?

I initially had a vivid image of laying in the loft and looking up at the stars through a skylight, but skylights in tiny houses are a bad idea. I paid the upgrade to have a skylight, and it leaked the first day I moved in. It wasn’t installed correctly and I woke up that first night with my feet wet. They tried to patch it up, but I ended up taking it out and have slept so much better since then.

What are your long-term goals for the tiny home?

I’ll live this way until it doesn’t work for me. Some people move into tiny homes until they pay off all their debt [by saving on higher mortgage payments or rent] and then they can buy a house, but I don’t have that kind of philosophy. I love it right now. I’d like to buy some land and move my tiny house there and have more ownership and privacy.

But who knows? It’s possible that life circumstances will dictate a change. I don’t have to get anyone on board with this lifestyle because I don’t currently have a pet or boyfriend. If there’s someone I need to accommodate in the future, I’ll cross that bridge when I get there.

How has your life changed since moving into your tiny home?

I have so much more space in my head. Maybe it’s also because I don’t live in the city anymore, but I come home and feel calm immediately. This is my retreat. I didn’t have Wi-Fi for the first year, so I had a lot of analog time. I’m more intentional with what I fill my life with, both in terms of time and things. Now I can go to Target and only buy one thing.

What advice would you give to someone interested in a tiny home?

You don’t have to wait for a tiny home to start living tiny. If you’re waiting for the physical new place to start making those changes, it’s going to be such a culture shock. While I was living in my apartment, I spent a year getting rid of stuff and growing comfortable with living with less.

I also stayed in a tiny home that was the same size as the house I wanted to build, and that was so crucial. You can do floor plans until the cows come home, but you need to try out the space to know how you’ll feel.